U.S. Navy Poised to Take Ownership of its Largest Warship 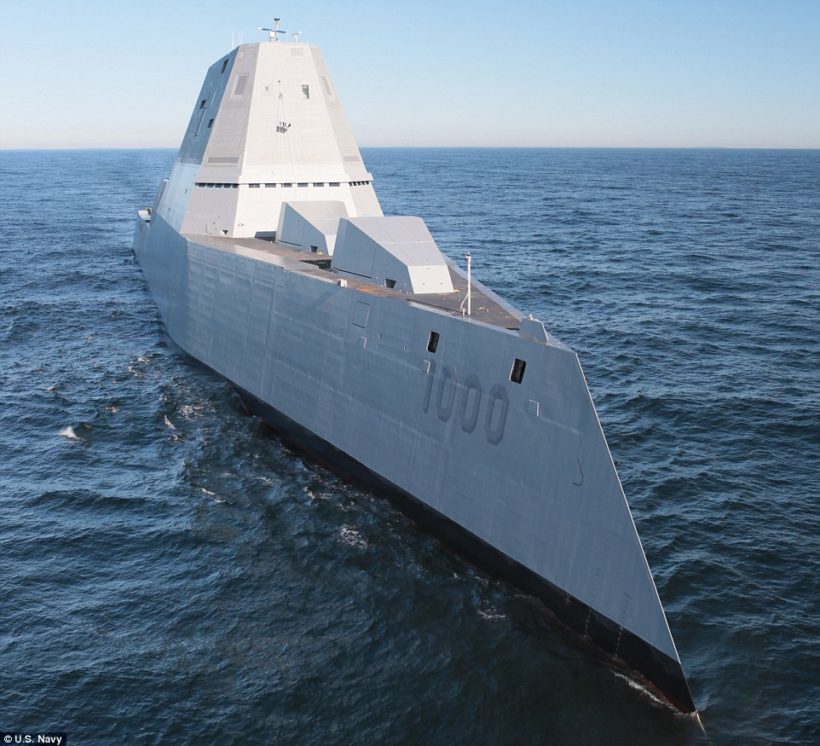 Advanced automation will allow the warship to operate with a much smaller crew size than current destroyers.

(by David Sharp, Associated Press) – The U.S. Navy is ready to take ownership of the USS Zumwalt, its largest and most technologically sophisticated destroyer. [In naval terminology, a destroyer is a fast maneuverable long-endurance warship intended to escort larger vessels in a fleet, convoy or battle group and defend them against smaller powerful short-range attackers.]

Sailors’ uniforms and personal effects, supplies and spare parts are being moved aboard the 610-foot warship in anticipation of crew members taking on their new charge, said Capt. James Kirk, the destroyer’s skipper.

The Zumbalt is the first new class of warship built at Maine’s Bath Iron Works since the Arleigh Burke slid into the Kennebec River in 1989. The shipyard is expected to turn the destroyer over to the Navy this week.

“We’ve overcome lots of obstacles to get to this point,” said electrician John Upham, of Litchfield. “I think everybody in the shipyard is proud of the work we’ve done.”

The ship features an angular shape that makes it 50 times more difficult to detect on radar; it’s powered by electricity produced by turbines similar to those in a Boeing 777; new guns are designed to pummel targets from nearly 100 miles away. Advanced automation will allow the big ship to operate with a much smaller crew than on current generation of destroyers. Future versions of the radical design are expected to be used to test a futuristic ‘Star Wars’ railgun (advanced gun system) that uses electromagnetic energy to fire a shell weighing 10kg at up to 5,400mph over 100 miles.

The final cost of the Zumwalt is expected to be at least $4.4 billion.

The original concept for the land-attack destroyer was floated more than 15 years ago then underwent several permutations. The final design called for a destroyer with a stealthy shape and advanced gun system that can fire rocket-propelled projectiles with pinpoint accuracy.

But the growing cost forced the Navy to reduce what was originally envisioned as a 32-ship program to just three ships. The loss of economies of scale* drove up the cost of the individual ships. [*Economies of scale are factors that cause the average cost of producing something to fall as the volume of its output increases.]

The slow-going and rising costs were little surprise after the General Accounting Office (GAO) warned that the Navy was trying to incorporate too many new technologies into the ship.

“Zumwalt was a challenge to assemble because of all the new technologies, but sea trials show it is a world-class warship with unique capabilities,” said Loren Thompson, senior defense analyst with the Virginia-based Lexington Institute.

Some of the ship’s 143 crew members have been in Bath for more than two years to prepare for the day they take control of it. The sailors will continue training to prepare the ship to be formally commissioned into service as USS Zumwalt at a ceremony in October in Baltimore, Kirk said. From there, the ship will travel to its homeport in San Diego for further tests and trials.

Shipbuilders in Bath are busy on the second ship in the class, the Michael Monsoor, which will be christened next month. Work also is underway on the third and final ship, the Lyndon B. Johnson. …

2. What preparation is currently being made, according to Captain James Kirk?

3. a) Where was the Zumwalt built?
b) What is significant about this?

4. Why was the number of this new class of destroyer to be built reduced from 32 to 3?

5. a) How long have some of the ship’s crew been in Bath? For what reason?
b) What phase of the process is it at?

6. What phase are the other two destroyers at in the building process?

About the USS Zumwalt, a DDG-1000 class destroyer:

Read a December 2015 article Zumwalt headed to sea for testing