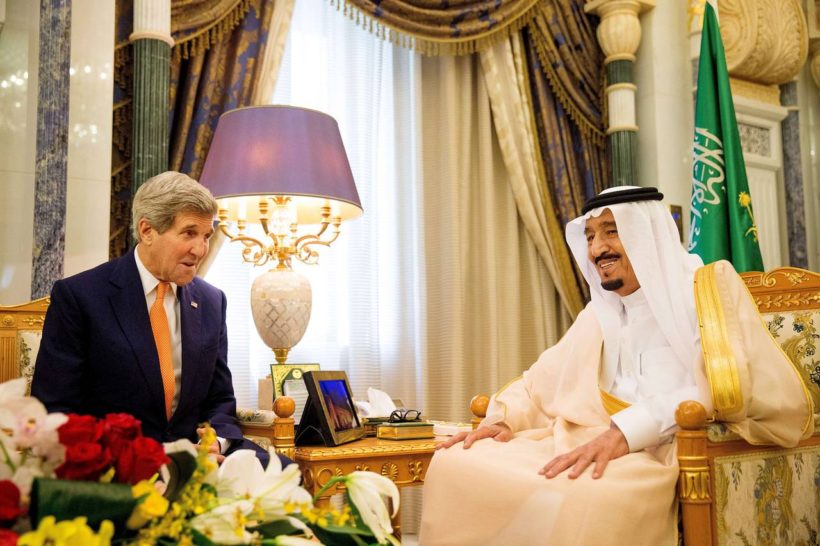 (by Paul Richter Reporting from Washington, Los Angeles Times) – The Obama administration scrambled Monday to blunt [tone down] suggestions that Persian Gulf leaders are signaling unhappiness with the White House by shunning President Obama’s invitation to a defense summit this week.

Although the heads of four of the six [invited] Arab states have declined to attend the two-day event, “we’re confident we’ll have the right people around the table at Camp David,” said Josh Earnest, the White House press secretary.

The meetings, which will take place Wednesday at the White House and Thursday at the presidential retreat in Maryland (Camp David), are aimed at strengthening ties at a time of unusual friction [tension] between the longtime allies. The six gulf states – Saudi Arabia, Kuwait, Bahrain, the United Arab Emirates, Qatar and Oman – are worried the administration may be forming an alliance with its ascendant [becoming more powerful] regional rival, Iran, and is disengaging in the Middle East despite the spread of civil strife.

King Salman of Saudi Arabia, and the heads of state of the United Arab Emirates, Oman and Bahrain have all disclosed in the last week that they were sending subordinates to meet with President Obama and his aides. [The New York Times reported on May 10 that a senior Obama administration official “said that when [Saudi King Salman] met Secretary of State John Kerry in Riyadh last week, he indicated that he was looking forward to coming to the meeting. But on Friday night, after the White House put out a statement saying Mr. Obama would be meeting with King Salman in Washington, administration officials received a call from the Saudi foreign minister that the king would not be coming after all.”]

Earnest insisted that if they were trying to indicate displeasure with Obama’s policies, “the message was not received because all the feedback we have received from the Saudis has been positive.”

Adel Jubeir, the former Saudi ambassador to Washington who was named Saudi Arabia’s foreign minister last month, said reports that the kingdom was snubbing the administration were “really off base…. We really don’t have disagreements.” [Foreign ministers are similar to U.S. Secretary of State]

Salman decided to remain in Saudi Arabia to monitor a five-day cease-fire that is scheduled to begin Tuesday in Yemen, where Saudi warplanes have been bombing Iranian-backed Houthi insurgents since March, Jubeir said.

Gulf officials and private experts have said the Arab states are eager to register their unhappiness with the drift of American policy, and hope the summit will bring them security reassurances and promises of new U.S. weapons.

But opinions were split on whether a snub was intended. [Snub: to ignore (someone) in a deliberate and insulting way; to not accept or attend (something) as a way to show disapproval]

Bruce Riedel, a former [policy adviser to Obama’s 2008 presidential campaign] and U.S. intelligence official now with the liberal Brookings Institution, wrote in a blog post that Salman’s no-show was “a very deliberate signal of his lack of confidence in American policy in the Middle East.”

He added, “The Saudis are unhappy with U.S. policy toward Iran, Syria, Iraq and Yemen. They don’t want a public argument with the Obama administration (unlike Israel) but they want a very public display of their dissatisfaction.”

Other experts pointed out that Salman, Sultan Qaboos bin Said of Oman and Sheik Khalifa bin Zayed al Nahyan of the United Arab Emirates are in poor health. And the two top Saudis in the delegation have day-to-day responsibility of running the country.

The Saudis probably intended to send “a little bit of a signal. But I don’t think it’s a catastrophic dismissal of Obama,” said Frederic Wehrey, a Mideast specialist of the nonpartisan Carnegie Endowment for International Peace.

Despite their current frustrations, each side has little choice but to rely on the other to try to stabilize the region and guarantee a continued flow of oil, he said.

2. a) What is a summit?
b) What is the purpose of President Obama’s defense summit this week taking place at the White House and then at Camp David?

3. a) List the six Gulf States invited to the summit.
b) What concern do the leaders of the Gulf states have with the Obama administration?

4. a) What is a subordinate?
b) Which Gulf state leaders are sending subordinates?

5. How is the White House responding to suggestions that the leaders’ decisions to send subordinates is meant as a snub to President Obama?

8. The Obama administration says there is no problem and portray it as not unusual. Others view the leaders’ decision not to attend the summit as done to send a signal of displeasure/concern to the White House. Consider the purpose of the summit. Ask a parent: what do you think – are four of the six invited leaders trying to snub President Obama by sending subordinates? How should the U.S. react? Does it matter? Explain your answer.