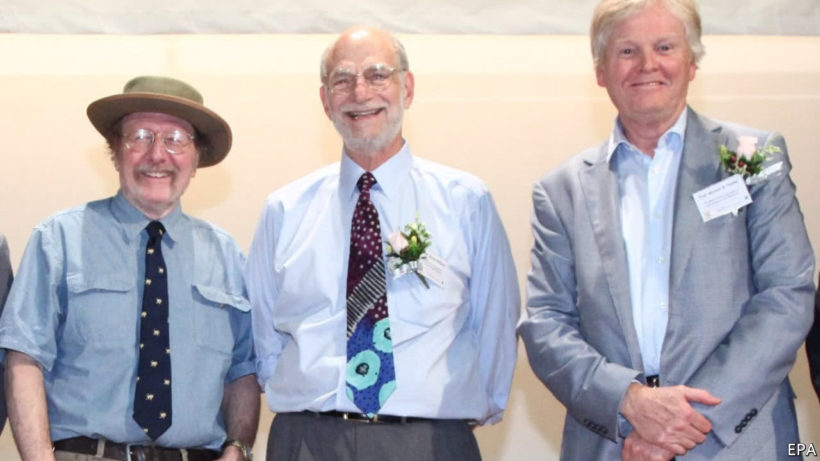 These help explain how people experience jet lag when their internal circadian rhythms get out of sync, while also having wider implications for disorders ranging from insomnia to depression to heart disease.

Chronobiology, or the study of biological clocks, is now a growing field of research thanks to the pioneering work of the three scientists, who explained the role of specific genes in keeping fruit flies in step with light and darkness.

Today, scientists are exploring new treatments based on such circadian cycles, including establishing the best times to take medicines, and there is an increased focus on the importance of healthy sleeping patterns.

“This ability to prepare for the regular daily fluctuations is crucial for all life forms,” Thomas Perlmann, secretary of the Nobel Committee, told reporters.

“This year’s Nobel prize laureates have been studying this fundamental problem and solved the mystery of how an inner clock in our bodies can anticipate daily fluctuations between night and day to optimize our behavior and physiology.”

Rosbash said the news that the trio had won the Nobel prize, which is worth 9 million Swedish crowns ($1.1 million), was “a little overwhelming.”

“It took my breath away, literally. I was woken up out of deep sleep and it was shocking,” he told Reuters.

“It’s great for basic science. It hasn’t had a tremendous amount of practical impact yet, so it’s really a very basic discovery … It’s good to have the attention on this kind of basic work.”

Hall, most recently of the University of Maine, collaborated with Rosbash while they both were at Brandeis University in Waltham, Massachusetts. They split the prize with Young of Rockefeller University in New York City.

Scientists were already pondering the concept of body clock genes in the 1960s and 1970s.

Then, in the mid-1980s, the three laureates used fruit flies to isolate a gene called period that controls the normal daily biological rhythm and showed how it encodes a protein called PER that accumulates in cells during the night and degrades during the day. Further research revealed the role of other genes in the complex system.

“We were hopeful what we did [with flies] would pertain more widely,” Young said in news briefing at Rockefeller University on Monday, but added that “it has unfolded in a way that just couldn’t be imagined at the beginning.”

Young said the trio could not have anticipated that the whole system could be revealed in their lifetimes, but new scientific tools helped accelerate the work.

“Just like puzzle pieces, the genes fell out and the way they work together provided this beautiful mechanism that we now appreciate.”

Their discoveries help explain how plants, animals and humans adapt their biological rhythm to be in synch with the Earth’s revolutions. …

Scientists now understand that body clocks influence alertness, hunger, metabolism, fertility, mood and other physiological conditions. And researchers have begun to study the implications of erratic sleeping and working patterns [on] children who stay up late.

“We are learning more and more what impact it has to not follow your clock,” Nobel committee member Christer Hoog told Reuters. “If you constantly disobey your clock, what will happen? Medical research is going on with regards to that.” Even plants have body clocks. Plants open during the day and close at night, but Jean Jacques d’Ortous de Mairan found that even plants kept in constant darkness continue to follow a similar rhythm.

Medicine is the first of the Nobel Prizes awarded each year. The prizes for achievements in science, literature and peace were created in accordance with the will of dynamite inventor and businessman Alfred Nobel and have been awarded since 1901.

Nobel medicine laureates have included scientific greats such as Alexander Fleming, the discoverer of penicillin, and Karl Landsteiner, whose identification of separate blood types opened the way to carrying out safe transfusions.

2. Define the following words used in the article

3. What was Dr. Rosbash’s reaction to winning the Nobel Prize? (How does view the award for their discovery?)

4. a) Describe the doctors’ discovery.
b) What impact has the discovery had on medicine?

5. What was surprising to Dr. Young about their research?

6. How does this news report inspire you?

This is a Nobel Prize-winning discovery because it shows how biology regulates body clocks for living organisms ranging from fruit flies, which these researchers worked with, to humans.

Chronobiologists, who study this kind of science, emphasize the importance of the discovery because it’s only after accepting body clocks as a biological fact that you can fully appreciate how big a role they play in our health. …

As biological creatures, we can’t all be at peak energy throughout the day. Sometimes we need to be on high alert and able to react quickly. At other times, we need to eat, rest, and sleep to regain energy. Our body clock regulates these phases, which is why most of us sleep at night and are awake during the day — though there’s significant variation among people as to when we feel most awake and most asleep, regulated by genetics and other factors.

Understanding there is a physical cycle and biological factors that all work together helps explain why it’s hard to suddenly pull all-nighters, adjust to a new time zone, or start waking up earlier: Your entire body, down to your cells, needs time to adapt. (from Business Insider)

Visit the website to read about the Nobel Prize in medicine.