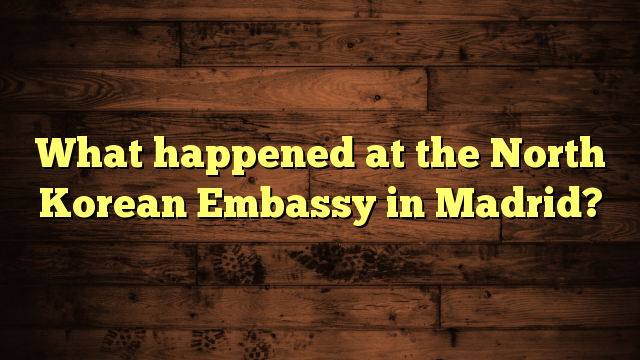 NOTE: Time reports: The Cheollima Civil Defense (CCD), which also goes by the name ‘Free Joseon,’ calls itself an “organization of refugees who escaped North Korea” that aims to “shake the Kim Jong Un regime.”

(Compiled from The Washington Post, Reuters and AFP) – U.S. authorities have arrested a former U.S. Marine who is a member of a group that allegedly raided the North Korean embassy in Madrid in February and stole computers, two sources familiar with the arrest said on Friday.

On Thursday, federal authorities arrested Christopher Ahn, a former U.S. Marine and a member of Free Joseon, a group dedicated to the overthrow of North Korea’s Kim Dynasty. He appeared in a federal-district court in Los Angeles on Friday where his attorney requested that the case be sealed. The court ruled in the attorney’s favor over the government’s objections, a Justice Department spokesman said.

Separately, federal agents raided the apartment of Adrian Hong, the leader of Free Joseon, said people familiar with the incident, who spoke on the condition of anonymity to discuss a sensitive law enforcement issue.

The group asserted responsibility for the raid on the embassy last month after a judge in Spain lifted a secrecy order in the case and accused Hong and two other men of participating in the incident as a part of a 10-member group.

The judge, Jose de la Mata, said evidence of various crimes had been found, including trespassing, threats, illegal detentions and burglary committed by a “criminal organization.” The judge said one of the men later shared material stolen from the embassy with the FBI.

The March statement by Free Joseon, also known as the Cheollima Civil Defense (CDC) group, pushed back against Spanish media reports that the group beat and gagged embassy staff.

“All occupants in the embassy were treated with dignity and necessary caution,” the group wrote. It also claimed that “no other governments” were aware of the raid until after it occurred. Initial media reports in Spain alleged that the CIA was involved.

State Department spokesman Robert Palladino said Tuesday that the U.S. government had nothing to do with the incident.

The group’s description of events could not be independently confirmed, but attorney Lee Wolosky said his client can verify its account, including that the Free Joseon members were invited into the embassy.

The dissident group, believed to include high-profile North Korean defectors, said it had orchestrated the February 22 embassy raid to highlight illicit activities rampant in North Korea’s foreign missions. The CCD said after the raid it had shared certain information potentially having “enormous intelligence value” with the FBI in the United States.

The raid came just days before a high-stakes nuclear summit in Vietnam between Kim and US President Donald Trump that ultimately failed to reach an accord.

The Spanish court is seeking the group member’s extradition.

In a statement to The Washington Post, Hong’s lawyer, Lee Wolosky, said he was “dismayed that the U.S. Department of Justice has decided to execute warrants against U.S. persons that derive from criminal complaints filed by the North Korean regime.”

“The last US citizen who fell into the custody of the Kim regime returned home maimed from torture and did not survive,” he said, referring to Otto Warmbier, a U.S. college student who was imprisoned in North Korea in 2016 and died shortly after being flown back to the United States in a coma in 2017.

“We have received no assurances from the US government about the safety and security of the US nationals it is now targeting,” Wolosky said in the statement.

North Korea’s foreign ministry denounced the incident a “grave terrorist attack” demanding an investigation into the perpetrators. The foreign ministry accused the FBI for being partially behind the raid. The U.S. State Department has said Washington had nothing to do with it.

The CCD — which offers to assist people attempting to defect from North Korea — emerged in 2017 when it posted an online video of the son of the North Korean leader’s assassinated brother, saying it had guaranteed his safety. Kim Jong-un’s nephew Kim Han-sol appeared on the CCD group’s YouTube channel in 2017. He is believed to be under the protection of the CCD after the murder of his father.

Compiled from April 19 reports at The Washington Post by John Hudson, Reuters by Mark Hosenball and Agence France-Presse at France24. Reprinted here for educational purposes only. May not be reproduced on other websites without permission.

2. a) What is Free Joseon?
b) How do they explain their motive for taking computers from the North Korean Embassy in Spain?

3. a) What evidence did the Spanish judge in charge of the case say there is against the men?
b) How does Free Joseon’s explanation of what occurred differ from the evidence the judge got from the North Korean embassy?

4. What did the men do with the material they took from the North Korean embassy? What was it?

“An anti-North Korean slogan was found sprayed on the wall of the North Korean Embassy in Kuala Lumpur, Malaysia early Monday morning. It read, “Down with Kim Jong-un” and “Free North Korea… we are rising up!”

On another side of the wall was the logo of “Free Joseon,” the group believed to have rescued the son of North Korean leader Kim Jong-un’s half-brother from the North’s assassination squads. …

On March 1, Cheollima Civil Defense changed its name to Free Joseon and declared itself the provisional government of North Korea.

The graffiti was sprayed on the day of the release of Siti Aisyah, one of the women who had been hired by North Korean agents to carry out the murder of Kim Jong Un’s half-brother Kim Jong-nam’s at Kuala Lumpur airport.

On its own website on Monday morning (March 11), Free Joseon posted a piece headlined, “Courage in Kuala Lumpur,” saying, “We’re lonely now when we’re longing for freedom quietly. But we’ll meet one by one through courage.”

President Trump has been negotiating with Kim Jong Un to eliminate his nuclear weapons program. The timing of Free Joseon’s confiscation of computers from the North Korean Embassy was not ideal. Some news outlets used the words “storming,” “beating,” “brazen raid,” “masked assailants” to describe the infiltration. Free Joseon says they were invited into the embassy. They most likely did somehow trick the guards to gain entrance. It is highly unlikely that they stormed the embassy and beat up the workers. North Korea must save face by lying about what actually occurred – the result being that their computers with potentially sensitive information were stolen.

a) What do you think the U.S. should do? – extradite the men to Spain? refuse to do so? Would the men be safe from North Korean operatives in Spain? Would not doing so harm U.S. success with North Korea’s nuke program?
[Note: Last week the North demanded U.S. Secretary of State Mike Pompeo be removed from negotiations (because he won’t back down or cave to their demands). They also tested a missile after pledging not to do so. The regime has counterfeited U.S. dollars, starved millions of its own people, put 100,000 or more in concentration camps, among other things.]

b) How would you describe the members of Free Joseon?

The group’s description of events could not be independently confirmed, but Wolosky said his client can verify its account, including that the Free Joseon members were invited into the embassy.

According to Spanish media reports, the assailants tied up the embassy staff with rope, put hoods over their heads and asked them questions.

More than an hour into the raid, a woman reportedly escaped, and her screams for help alerted a neighbor, who contacted police. When authorities arrived at the embassy, a man opened the door and told them there was no problem. Moments later, the embassy gates opened, and the assailants dashed out to two embassy cars and sped away, according to local reports. The vehicles were found abandoned on a nearby street.

Ahn, who appeared in the U.S. District Court for the Central District of California, was involved in the group’s 2017 evacuation of the nephew of Kim Jong Un from Macau when potential threats to his life surfaced, according to CDC attorney Lee Wolosky. The nephew was the son of Kim Jong Nam, the North Korean leader’s exiled half brother who was assassinated in a nerve-gas attack in a Malaysian airport that same year. Kim Jong Nam was widely believed to have been killed by the regime, making his son a likely target.

The involvement of Free Joseon in the raid was first reported by The Post in March. (from The Washington Post article by John Hudson)