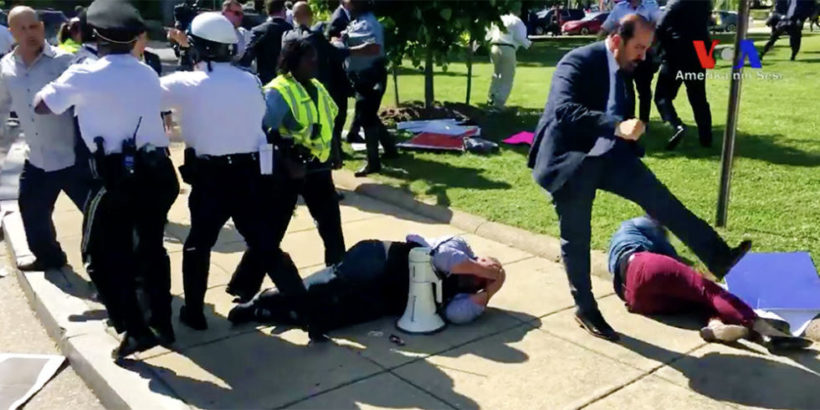 (by Chuck Ross, The Daily Caller) – Bodyguards working for Turkey’s authoritarian president, Recep Tayyip Erdogan, were involved in a massive brawl that left nine people injured outside of the residence of Turkey’s ambassador in Washington, D.C. on Tuesday, May 16.

The melee, which was caught on video, occurred just after President Erdogan met with President Trump at the White House.

Protesters critical of the Turkish government claimed that Erdogan’s bodyguards or security staffers working for the Turkish embassy launched the attack. Video of the fight showed men in suits kicking people, including women, some while they were on the ground. The footage shows some victims covered in blood.

Aram Suren Hamparian, the president of the Armenian National Committee of America, filmed some of the incident and says he believes that the instigators were Erdogan bodyguards or security personnel working for the Turkish ambassador.

“They just literally broke through the [police] line, crossed the street, and stopped the protesters [by attacking them],” Hamparian told The Daily Caller by phone
(See map of Turkish Embassy and location of protestors)

Hamparian, who is highly critical of Erdogan, said that two dozen anti-Erdogan protesters, mostly Armenian and Kurdish, were protesting peacefully across the street from the residence. He said that the onslaught broke out suddenly. He says the videos show that the pro-Erdogan fighters appeared to be professionals of some sort. He also said they outnumbered the protesters.

“It all took place at once. It was by very capable people. It felt to me, it looked to me like a highly orchestrated attack,” he added.

Hamparian said that some Erdogan supporters were not violent. He said that he spent most of the night at the hospital with some victims of the attack. One man who Hamparian helped received between 10 and 15 stitches, he said. Another woman underwent a CT scan.

Halil Mutlu, a cousin of President Erdogan’s and a board member of the Turkish American Steering Committee, was spotted on the sidelines of the fray. At one point he was seen leading a pro-Erdogan chant aimed at the government critics.

Tuesday’s brawl harkens back to Erdogan’s visit to Washington, D.C. in March 2016. During a visit to the Brookings Institution, Erdogan’s bodyguards verbally and physically assaulted a group of protesters.

After the battle subsided, Erdogan appeared outside of the ambassador’s residence to speak with supporters. [Later news reports state that President Erdogan was outside the embassy before the brawl and it is possible (it appears) that the bodyguards took orders from President Erdogan to attack the peaceful Kurdish-American and Armenian-American protesters.] [From UK Guardian and Daily Telegraph reports:

“All of the sudden they just ran towards us,” Yazidi Kurd demonstrator Lucy Usoyan told ABC, adding that she was attacked by a pro-Erdoğan supporter.

“Someone was beating me in the head nonstop, and I thought, ‘Okay, I’m on the ground already, what is the purpose to beat me?’”

Tensions between Mr. Erdogan’s government and the Kurdish minority in the country are high.

Erdogan met with Trump amid disagreements over Washington’s decision to arm the Syrian Kurdish YPG militia that Ankara regards as an extension of the outlawed Kurdistan Workers Party (PKK).  Washington does not agree. The PKK has fought an insurgency in southeastern Turkey since 1984 and is considered a terrorist group by the United States, Turkey and Europe.

A ceasefire between Turkey and the PKK ended last year and clashes have since claimed hundreds of lives on both sides.

Mr Erdogan’s government has been carrying out a broad crackdown on political opponents, including among the Kurds, in the aftermath of a failed coup attempt in July, arresting or firing tens of thousands of people (including teachers and other professionals) from their jobs.]

2. Where was President Erdogan when his bodyguards attacked a group of people who were peacefully protesting against his policies?

4. Who were the people holding a protest against President Erdogan across the street from the Turkish Embassy in D.C.?

5. a) What previous incident were President Erdogan’s bodyguards involved in with protesters in D.C.?
b) Considering this, do you think the D.C. Police Department made adequate preparation for Erdogan’s visit last week? Explain your answer.

6. Watch the videos under “Resources” below. That Turkish security forces violated the First Amendment rights of American protesters is, of course, a significant breach of international diplomacy. How do you think the U.S. State Department should handle this?

Following the attack by President Erdogan’s bodyguards, the Turkish governemnt is demanding an apology from the U.S. According to Turkish pro-government media, which includes all mainstream newspapers and TV channels in Turkey, the video and U.S. news got the story wrong.

In the Turkish state media version, “terrorist sympathizers and Kurdistan Workers’ party (PKK) supporters” had started to create trouble. Erdoğan’s bodyguards decided to intervene, they say, because US police were not able to adequately handle that situation.

Watch a video of the attack:

President Erdogan does not tolerate any opposition. Turkish-born NBA player Enes Kanter had his passport revoked by Turkey this week when he was traveling abroad. Kanter, who plays center for the Oklahoma City Thunder, has long been an outspoken critic of Turkey’s President Erdogan. He says Turkey canceled his passport in retaliation for his political views.  Watch an interview: