Tsarnaev guilty of all 30 counts in Boston bombing 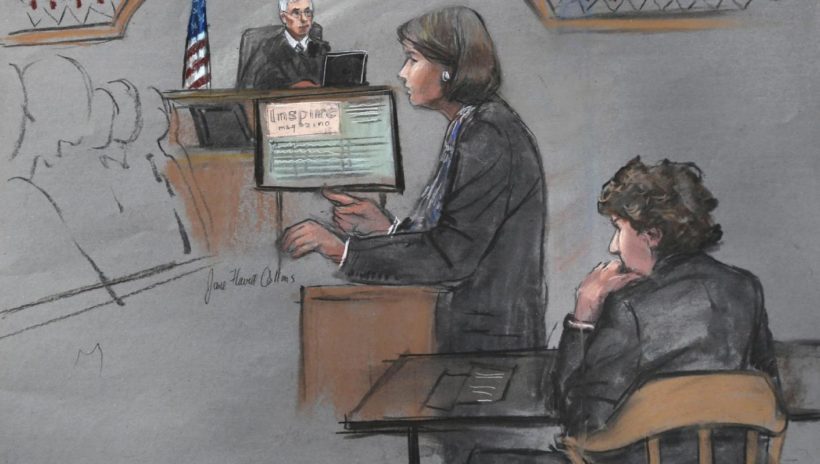 (by Milton J. Valencia and Patricia Wen, The Boston Globe) – After hearing from 95 witnesses over 16 days of testimony, a jury has convicted Dzhokhar Tsarnaev in the Boston Marathon bombings and subsequent crimes, but that does not mean his case has ended. Federal prosecutors are seeking the death penalty, and federal law recommends that a jury make that decision. Here’s how that will happen.

What happens next? – US District Judge George A. O’Toole Jr. will hold a second phase of the trial, in which prosecutors and defense lawyers will give opening statements and present evidence supporting their arguments about what penalty Tsarnaev deserves. Defense attorneys say he should be sentenced to life in prison.

Why are prosecutors seeking the death penalty?  – Many of the charges Tsarnaev was convicted of are capital crimes, and US Attorney General Eric Holder filed a Notice of Intent in January 2014 citing what are known as “aggravating” factors that call for the death penalty: They include Tsarnaev’s intentional killing and infliction of injuries, the grave risk of death to more than one person, the substantial planning and premeditation in the crimes, and the “heinous, cruel and depraved manner” of carrying out the crimes. The prosecutors also cited other factors that they are not required by law to prove: His encouragement of others to carry out similar crimes, the extent of the impact on the victims, and his lack of remorse.

What do the defense lawyers say? – While admitting that Tsarnaev took part in the crimes, they say the death penalty should be reserved for the worst of the worst, and they have sought to show that Tsarnaev’s older brother, Tamerlan Tsarnaev, was the mastermind of the attacks. He was killed during a confrontation with police in Watertown. Defense lawyers say he was the one who harbored extremist views and he radicalized his younger brother and pressured him into taking part in the attacks. The defense may also cite what are known as “mitigating” factors: Tsarnaev has no prior criminal record; he was a lesser participant; and they may cite his upbringing as the youngest of four children in an immigrant family facing a difficult adjustment to American life.

According to Albert “Buzz” Scherr, a University of New Hampshire law professor who has done extensive work on death penalty issues, the process is meant “to make sure the jury doesn’t send [the defendant] to death based on emotion.”

Jurors are told they are not required to sentence anyone to death. Scherr called this stage the “battle of images” for jurors, a chance to weigh the prosecution’s assertion that Tsarnaev is the “worst of the worst” and the defense’s argument that Tsarnaev had difficult family circumstances and deserves life in prison without parole.”

Is the penalty phase a real trial? – It is a trial in the sense that prosecutors and defense lawyers can introduce witnesses and evidence to support their arguments, and jurors will make a decision based on that presentation. The prosecutors and lawyers are not bound by the federal rules of evidence that dictate normal criminal trials, and they are allowed broad discretion in presenting their argument. A judge can bar evidence only if he or she finds it is unfairly prejudicial, confuses an issue, or is misleading. Also, jurors must find that prosecutors proved aggravating factors, “beyond a reasonable doubt” – the standard required for criminal trials. However, they need only find that mitigating factors are proven by a “preponderance of the evidence” – a lesser standard. …

If a jury is not unanimous in that decision, the judge will hand out a sentence of life imprisonment.

Will the judge pick a new jury?  – Federal rules recommend that a jury hand out a death sentence, rather than a judge, and jurors are chosen after a lengthy screening process to make sure they are willing to sentence a defendant to death if they find it is warranted. While a new jury can be chosen for the penalty phase, in most cases the jury that determines a defendant’s guilt is the same jury that hands out a sentence. …

Can a judge change the jury’s decision? – No. The judge must hand out the sentence the jury chooses. He will dismiss the jury once a verdict is rendered and resolve pre-sentencing legal issues and arguments, and then will hold a sentencing hearing.

Are death sentences common? – The federal government has executed three people since modern death penalty laws first went into effect in 1988. Another 59 people have been sentenced to death but their cases are on some form of appeal. Some died while their cases were on appeal.

The federal government has sought the death penalty for 495 defendants, though 231 of them avoided trial, either by plea negotiation or because the government dropped its request for the death penalty, or the judge barred capital punishment in the case, according to the Federal Death Penalty Resource Counsel.

In cases in which a jury was asked to decide between life and death, 153 life sentences were imposed, at a rate of 66 percent, and chose death 79 times, at a rate of 34 percent.

How is the death penalty carried out? – The US Bureau of Prisons has established regulations for carrying out the death penalty, such as the date, time, place, and method. The bureau has designated its Federal Correctional Complex in Terre Haute, Ind., as its place of execution.

A judge, however, could order that an execution take place at a correctional institution elsewhere. For instance, a decade ago, US District Judge Mark L. Wolf sentenced admitted serial killer Gary Lee Sampson to be executed in New Hampshire, a state that allows the death penalty, so that the families of Sampson’s victims could attend if they choose to. Sampson was not executed because of an appeal in his case, and the government is again seeking capital punishment.

In death penalty cases, the Bureau of Prisons will schedule the execution to take place no sooner than 60 days from the entry of judgment of death, unless there is a stay of execution pending an appeal, which is likely.

Reprinted here for educational purposes only. May not be reproduced on other websites without permission from The Boston Globe. Visit the website at bostonglobe .com.

NOTE to students: Read the “Background” and see “Resources” before answering the questions.

1. Now that Dzhokhar Tsarnaev has been found guilty, what will the second phase of the trial determine?

3. What four aggravating factors did US Attorney General Eric Holder cite when calling for the death penalty for Dzhokhar Tsarnaev?

4. What do jurors need to decide before determining what Tsarnaev’s sentence should be?

5. What sentence will Tsarnaev receive if the jurors are not unanimous in their decision?

6. Tsarnaev’s defense attorneys are not disputing his guilt, rather what punishment he deserves, arguing that he had difficult family circumstances and should therefore only be given life in prison. Read about the victims of the Boston bombing. Do you think Tsarnaev deserves the death penalty? Why or why not?

Surveillance video shows Dzhokhar Tsarnaev, wearing a turned-around white ball cap, lingering for four minutes by a tree. He slips his backpack off his shoulder. In front of him, a row of children, including 8 year-old Martin Richard, who was mortally wounded by the bomb blast, stands behind a metal barricade.

“These children weren’t innocent to him,” Assistant U.S. Attorney Aloke Chakravarty told jurors. “They were American. He knew what the bag was designed to do.”

After the attacks, Tsarnaev wrote with a pencil on the side of a boat where he hid during the manhunt. It showed, more than anything else, how he had adopted the beliefs of the jihadists as his own.

“In that boat, with helicopters overhead and sirens blaring, he chose to write something to the American people,” the prosecutor said, adding he probably believed he was spending his final moments on Earth.

“In that boat, when the helicopters were overhead, the sirens were blaring, there were police canvassing, looking for him, he was all alone, and in his voice he chose to write something to the American people,” Chakravarty said.

The prosecutor displayed a photograph of the writing on the sides of a boat pocked by bullets and streaked with Tsarnaev’s blood, and read the manifesto in its entirety.

“I am jealous of my brother who has received the reward of (paradise.) … I do not mourn because his soul is very much alive. God has a plan for each person. Mine was to hide in this boat and shed some light on our actions.”

He asked Allah to make him a martyr so he could “be among all the righteous people in the highest levels of heaven.”

Then he lashed out against America:

“The U.S. government is killing our innocent civilians, but most of you already know that. As a Muslim, I can’t stand to see such evil go unpunished. We Muslims are one body. You hurt one, you hurt us all.”

He wrote that the Muslim nation is beginning to rise, along with the soldiers of the holy war. “Know that you are fighting men who look into the barrel of your gun and see heaven. Now, how can you compete with that? We are promised victory and we will surely get it. Now I don’t like killing innocent people. It is forbidden in Islam. But due to (bullet hole), it is allowed.”

Remember the victims of the Boston bombing

From CNN:  Timeline of the Boston bombings, manhunt and aftermath