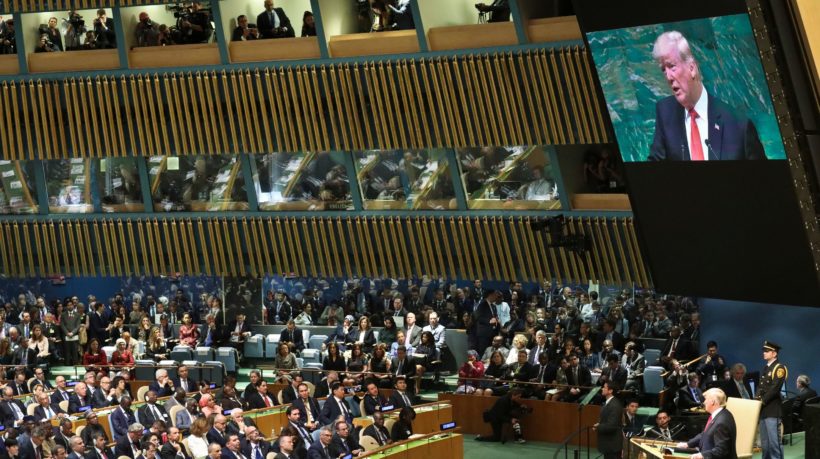 President Trump’s speech to the 73nd Session of the United Nations General Assembly in NYC on September 25, 2018. The President’s speech was 34 minutes in length.

One year ago, I stood before you for the first time in this grand hall. I addressed the threats facing our world, and I presented a vision to achieve a brighter future for all of humanity.

Today, I stand before the United Nations General Assembly to share the extraordinary progress we’ve made.

America’s economy is booming like never before. Since my election, we’ve added $10 trillion in wealth. The stock market is at an all-time high in history, and jobless claims are at a 50-year low. African American, Hispanic American, and Asian American unemployment have all achieved their lowest levels ever recorded. We’ve added more than 4 million new jobs, including half a million manufacturing jobs.

We have passed the biggest tax cuts and reforms in American history. We’ve started the construction of a major border wall, and we have greatly strengthened border security.

We have secured record funding for our military — $700 billion this year, and $716 billion next year. Our military will soon be more powerful than it has ever been before.

In other words, the United States is stronger, safer, and a richer country than it was when I assumed office less than two years ago.

This is great news for our citizens and for peace-loving people everywhere. We believe that when nations respect the rights of their neighbors, and defend the interests of their people, they can better work together to secure the blessings of safety, prosperity, and peace.

Each of us here today is the emissary of a distinct culture, a rich history, and a people bound together by ties of memory, tradition, and the values that make our homelands like nowhere else on Earth.

That is why America will always choose independence and cooperation over global governance, control, and domination.

I honor the right of every nation in this room to pursue its own customs, beliefs, and traditions. The United States will not tell you how to live or work or worship.

We only ask that you honor our sovereignty in return.

From Warsaw to Brussels, to Tokyo to Singapore, it has been my highest honor to represent the United States abroad. I have forged close relationships and friendships and strong partnerships with the leaders of many nations in this room, and our approach has already yielded incredible change.

With support from many countries here today, we have engaged with North Korea to replace the specter of conflict with a bold and new push for peace.
In June, I traveled to Singapore to meet face to face with North Korea’s leader, Chairman Kim Jong Un.

We had highly productive conversations and meetings, and we agreed that it was in both countries’ interest to pursue the denuclearization of the Korean Peninsula. Since that meeting, we have already seen a number of encouraging measures that few could have imagined only a short time ago.

The missiles and rockets are no longer flying in every direction. Nuclear testing has stopped. Some military facilities are already being dismantled. Our hostages have been released. And as promised, the remains of our fallen heroes are being returned home to lay at rest in American soil.

I would like to thank Chairman Kim for his courage and for the steps he has taken, though much work remains to be done. The sanctions will stay in place until denuclearization occurs.

I also want to thank the many member states who helped us reach this moment — a moment that is actually far greater than people would understand; far greater — but for also their support and the critical support that we will all need going forward.

A special thanks to President Moon of South Korea, Prime Minister Abe of Japan, and President Xi of China.

In the Middle East, our new approach is also yielding great strides and very historic change.

Following my trip to Saudi Arabia last year, the Gulf countries opened a new center to target terrorist financing. They are enforcing new sanctions, working with us to identify and track terrorist networks, and taking more responsibility for fighting terrorism and extremism in their own region.

The UAE, Saudi Arabia, and Qatar have pledged billions of dollars to aid the people of Syria and Yemen. And they are pursuing multiple avenues to ending Yemen’s horrible, horrific civil war.

Ultimately, it is up to the nations of the region to decide what kind of future they want for themselves and their children.

For that reason, the United States is working with the Gulf Cooperation Council, Jordan, and Egypt to establish a regional strategic alliance so that Middle Eastern nations can advance prosperity, stability, and security across their home region.

Thanks to the United States military and our partnership with many of your nations, I am pleased to report that the bloodthirsty killers known as ISIS have been driven out from the territory they once held in Iraq and Syria. We will continue to work with friends and allies to deny radical Islamic terrorists any funding, territory or support, or any means of infiltrating our borders.

The ongoing tragedy in Syria is heartbreaking. Our shared goals must be the de-escalation of military conflict, along with a political solution that honors the will of the Syrian people. In this vein, we urge the United Nations-led peace process be reinvigorated. But, rest assured, the United States will respond if chemical weapons are deployed by the Assad regime.

I commend the people of Jordan and other neighboring countries for hosting refugees from this very brutal civil war.

As we see in Jordan, the most compassionate policy is to place refugees as close to their homes as possible to ease their eventual return to be part of the rebuilding process. This approach also stretches finite resources to help far more people, increasing the impact of every dollar spent.

Every solution to the humanitarian crisis in Syria must also include a strategy to address the brutal regime that has fueled and financed it: the corrupt dictatorship in Iran.

Iran’s leaders sow chaos, death, and destruction. They do not respect their neighbors or borders, or the sovereign rights of nations. Instead, Iran’s leaders plunder the nation’s resources to enrich themselves and to spread mayhem across the Middle East and far beyond.

The Iranian people are rightly outraged that their leaders have embezzled billions of dollars from Iran’s treasury, seized valuable portions of the economy, and looted the people’s religious endowments, all to line their own pockets and send their proxies to wage war. Not good.

Iran’s neighbors have paid a heavy toll for the region’s [regime’s] agenda of aggression and expansion. That is why so many countries in the Middle East strongly supported my decision to withdraw the United States from the horrible 2015 Iran Nuclear Deal and re-impose nuclear sanctions.

The Iran deal was a windfall for Iran’s leaders. In the years since the deal was reached, Iran’s military budget grew nearly 40 percent. The dictatorship used the funds to build nuclear-capable missiles, increase internal repression, finance terrorism, and fund havoc and slaughter in Syria and Yemen.

The United States has launched a campaign of economic pressure to deny the regime the funds it needs to advance its bloody agenda. Last month, we began re-imposing hard-hitting nuclear sanctions that had been lifted under the Iran deal. Additional sanctions will resume November 5th, and more will follow. And we’re working with countries that import Iranian crude oil to cut their purchases substantially.

We cannot allow the world’s leading sponsor of terrorism to possess the planet’s most dangerous weapons. We cannot allow a regime that chants “Death to America,” and that threatens Israel with annihilation, to possess the means to deliver a nuclear warhead to any city on Earth. Just can’t do it.

This year, we also took another significant step forward in the Middle East. In recognition of every sovereign state to determine its own capital, I moved the U.S. Embassy in Israel to Jerusalem.

The United States is committed to a future of peace and stability in the region, including peace between the Israelis and the Palestinians. That aim is advanced, not harmed, by acknowledging the obvious facts.

America’s policy of principled realism means we will not be held hostage to old dogmas, discredited ideologies, and so-called experts who have been proven wrong over the years, time and time again. This is true not only in matters of peace, but in matters of prosperity. …

Read the speech in its entirety at whitehouse.gov.
(Watch video clips of the speech under “Resources” below, or view the entire speech at the White House youtube page.)

Watch the video clips for each country under “Resources”  below before answering the questions.

1. Regarding North Korea:
a) What steps has Kim Jong Un taken since meeting with President Trump in June?
b) List the people President Trump thanks regarding changing relations with North Korea.
c) While complimenting Kim Jong Un, President Trump remains resolute. What does he say to assure the world (and Kim) that the U.S. will not be fooled by him (as we have continuously been in the past)?

2. Regarding the Middle East:
a) What actions have the Gulf Countries taken following President Trump’s visit to Saudi Arabia last year?
b) Why is the U.S. working with the Gulf Cooperation Council, Jordan and Egypt?
c) What does he thank the U.S. military and many of the Middle Eastern nations for doing in the fight against radical Islamic terrorists?

3. Regarding the humanitarian crisis caused by the ongoing civil war in Syria:
a) What must the shared goals of the world be regarding Syria?
b) What warning does he give to Syrian president Bashar Assad’s regime?
c) President Trump “commend[s] the people of Jordan and other neighboring countries for hosting refugees from this very brutal civil war.” What does he say is the most compassionate policy, as evidenced in Jordan?

5. On Israel:
a) Presidents Clinton, Bush and Obama all neglected to enact U.S. Congress’ 1999 Jerusalem Embassy Act, which called for the U.S. Embassy in Israel to be moved from Tel Aviv to Jerusalem. Why did President Trump carry out the requirement of this law?
b) President Trump also said, “The United States is committed to a future of peace and stability in the region, including peace between the Israelis and the Palestinians. That aim is advanced, not harmed, by acknowledging the obvious facts [that Jerusalem is the capital of Israel, etc.].” This policy is different than what any other president has said. What do you think of this frank assertion?

6. In the introduction of his speech, President Trump noted his administration’s accomplishments. Media reports that the UN members laughed at him. Watch the actual clip. (It is the 6th video under “Resources”.)
a) What do you think? Were they laughing at him, or laughing with him?
b) Watch an interview with US Ambassador to the UN Nikki Haley. (It is the 6th video under “Resources”.) What does she say about it?

7. In the following statements made by President Trump, he emphasizes the idea of national sovereignty over globalism. Do you agree or disagree with each of these statements? Explain your answers.

President Trump’s doctrine of principled realism:  In his speech to the UN, Mr. Trump spoke of America’s policy of “principled realism.”  In December 2017, the president presented his administration’s “National Security Policy” which described his strategy of principled realism that is “guided by outcomes, not ideology. It is based upon the view that peace, security, and prosperity depend on strong, sovereign nations that respect their citizens at home and cooperate to advance peace abroad. And it is grounded in the realization that American principles are a lasting force for good in the world.” With its “America First” foreign policy, the President Trump said his administration “would put the safety, interests, and well-being of our citizens first.” (Read an analysis)