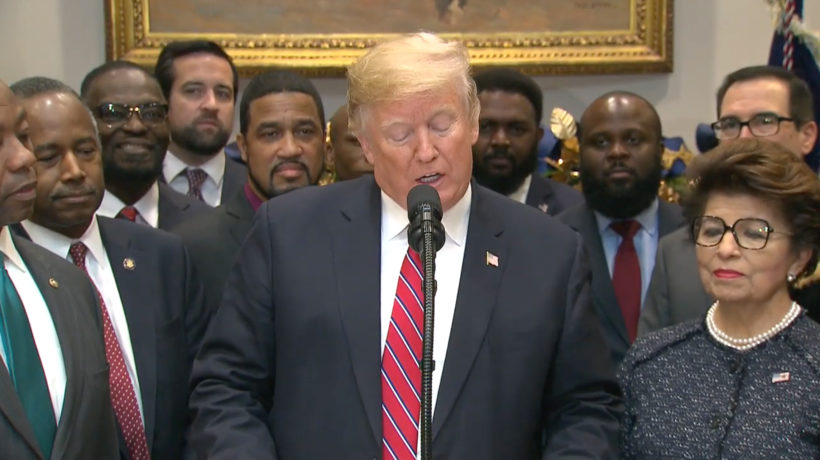 (by Naomi Jagoda, The Hill) – President Trump on Wednesday signed an executive order aimed at helping economically distressed communities, building off a provision in his tax-cut law.

The order creates a White House panel dubbed the Opportunity and Revitalization Council, which will be led by Housing and Urban Development Secretary Ben Carson and consist of representatives from 13 federal agencies.

At a signing ceremony at the White House, Trump called the council a “very big thing” and said that the council will help utilize government resources to rebuild “impoverished neighborhoods that have been ignored by Washington in years past.”

A senior White House official said ahead of the event that the council will be tasked with helping to engage with members of government at all levels about how to use funds to boost low-income communities.

The executive order is designed to supplement a piece of President Trump’s 2017 tax-cut law known as opportunity zones. Under the opportunity zone program, investors can receive tax breaks if they invest in distressed areas that were certified by the Treasury Department.

More than 8,000 communities nationwide, where nearly 35 million people live, are in opportunity zones. Treasury Secretary Steven Mnuchin has said that he expects that there will be about $100 billion in private capital invested in the zones.

The new White House council will aim to streamline and target existing federal programs so that they benefit opportunity zones, examine legislative proposals and potential regulatory reforms, develop reports on ways to encourage investments in distressed communities, and work to ensure that the government can collect the necessary data so that it can measure the results of the opportunity-zone program and governmental actions, the senior White House official said.

“The whole goal is to, one, leverage this private sector economic incentive through opportunity zones, and two, create that public commitment from the federal government to ensure that that economic incentive helps all Americans and would create a robust private-public partnership to revitalize communities,” said Ja’Ron Smith, special assistant to the president on legislative affairs.

The opportunity zone program was championed heavily by Scott while the tax law was being written, and the idea has some bipartisan support. …

Updated at 3:51 p.m. From thehill .com. Reprinted here for educational purposes only. May not be reproduced on other websites without permission from The Hill.

2. a) What is the Opportunity and Revitalization Council?
b) Who will lead the council?

3. What is the purpose of the council? – What will it do? Be specific.

4. On what law is President Trump’s executive order on the White House council based?

5. a) How many communities and people across the country will benefit from the opportunity zones?
b) How much private capital ($) does Treasury Secretary Steve Mnuchin expect will be invested in the zones?

6. Watch the video under “Resources” below the questions. What do you think of this program aimed at revitalizing economically distressed communities by giving incentive to businesses to open in these communities?