Trump says U.S. nuclear arsenal should be at ‘top of the pack’ 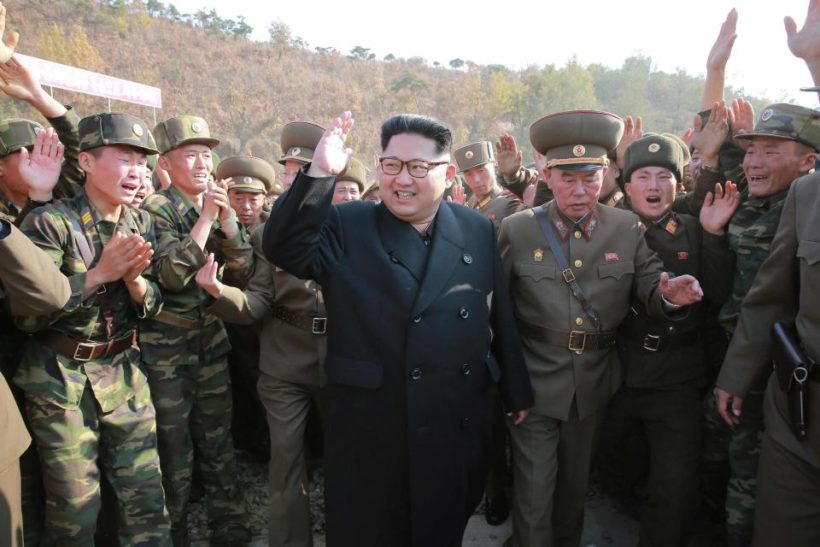 The tyrannical leader of North Korea has made it his mission to dramatically increase the amount of nukes in his control in less than a year. Kim Jong-un plans to be equipped with an arsenal of nuclear weapons within the next 12 months, it has been claimed. (The Sun/image Reuters)

(by Steve Holland, Reuters)  WASHINGTON — President Donald Trump said on Thursday he wants to ensure the U.S. nuclear arsenal is at the “top of the pack,” saying the United States has fallen behind in its weapons capacity. …

In his first comments about the U.S. nuclear arsenal since taking office on Jan. 20, President Trump was asked about a December tweet in which he said the United States must greatly strengthen and expand its nuclear capacity “until such time as the world comes to its senses regarding nukes.”

President Trump said in the interview he would like to see a world with no nuclear weapons but expressed concern that the United States has “fallen behind on nuclear weapon capacity.”

“It would be wonderful, a dream would be that no country would have nukes, but if countries are going to have nukes, we’re going to be at the top of the pack,” Trump said.

Russia has 7,000 warheads and the United States, 6,800, according to the Ploughshares Fund, an anti-nuclear group. …

The new strategic arms limitation treaty, known as New START, [an agreement President Obama made in 2011] between the United States and Russia requires that by February 5, 2018, both countries must limit their arsenals of strategic nuclear weapons to equal levels for 10 years. [President Obama had pledged in 2009 to pursue the elimination of nuclear weapons (nuclear disarmament) and this was a first step.]

The treaty permits both countries to have no more than 800 deployed and non-deployed land-based intercontinental and submarine-launched ballistic missile launchers and heavy bombers equipped to carry nuclear weapons, and contains equal limits on other nuclear weapons. …

“Just another bad deal that the country made, whether it’s START, whether it’s the Iran deal … We’re going to start making good deals,” he said.

The United States is in the midst of a $1 trillion, 30-year modernization of its aging ballistic missile submarines, bombers and land-based missiles.

President Trump also [noted] that the Russian deployment of a ground-based cruise missile is in violation of a 1987 treaty that bans land-based American and Russian intermediate-range missiles.

“To me it’s a big deal,” said Trump, who has held out the possibility of [the U.S. establishing friendly ties] with Russia.

Asked if he would raise the issue with [Russian President] Putin, President Trump said he would do so “if and when we meet.” He said he had no meetings scheduled as of yet with [Mr.] Putin.

“There’s talks of a lot more than that,” Trump said, when asked about the missile defense system. “We’ll see what happens. But it’s a very dangerous situation, and China can end it very quickly in my opinion.”

…President Trump did not completely rule out possibly meeting North Korean leader Kim Jong Un at some point in the future under certain circumstances but suggested it might be too late.

“It’s very late. We’re very angry at what [Kim Jong Un] has done, and frankly this should have been taken care of during the Obama administration,” he said.

1. How many nuclear weapons do the U.S. and Russia each have?

2. a) In an interview this week, Reuters’ reporters asked President Trump about his December tweet in which he said the U.S. must greatly strengthen and expand its nuclear capacity “until such time as the world comes to its senses regarding nukes.”
How did President Trump explain his thinking about other countries (and the U.S.) having nuclear weapons?
b) Do you agree with this belief? Explain your answer.
c) Ask a parent the same question.

5. What did President Trump note about Russia’s deployment of a ground-based cruise missile?

6. a) What is the U.S. considering doing about North Korea’s ballistic missile tests?
b) Regarding North Korea’s aggressive tests, President Trump said “it’s a very dangerous situation” and added, “It’s very late. We’re very angry at what [Kim Jong Un] has done, and frankly this should have been taken care of during the Obama administration.”
Ask a parent, or a grandparent: Do you agree or disagree with the president’s assertion? Please explain your answer.

In his 2016 interview with DemocracyNow in which he opposes Donald Trump’s assertions about nuclear weapons, Joseph Cirincione of the Ploughshares Fund, the anti-nuclear group quoted by Reuters said:

“There is nothing inevitable about nuclear proliferation. For the last 40 years, Democrats and Republicans, liberals and conservatives, have had a concerted policy to reduce nuclear weapons in the world. And guess what. It has worked. There are far fewer nuclear weapons in the world now than at the height of the Cold War. We’ve cut the global arsenals by 80 percent. More countries have given up nuclear weapons and nuclear programs over the last 30 years than have tried to acquire them. We’re down to one rogue state, so-called rogue state, North Korea. That’s it. There’s nobody else. So there’s nothing inevitable about this.”

“Even if every nuclear weapon on the planet were destroyed — and how could we be sure that had happened? — it still wouldn’t destroy the knowledge of how to make nuclear weapons. Countries with aggressive intentions need only choose the time when they would put their knowledge of nuclear weapons to use, and have the world at their mercy.”

“U.S. nuclear strategy cannot be static, but must take into account the nuclear strategy and capabilities of its adversaries. America needs to bolster its deterrence not to start a war, but to prevent one.  The United States needs a robust nuclear force, therefore, not because anyone wants to fight a nuclear war, but rather, the opposite: to deter potential adversaries from attacking or coercing the United States and its allies with nuclear weapons of their own.”

Progressives generally believe in reducing/eliminating nuclear arms worldwide as the best way to protect the world from nuclear war. Conservatives hold the view of President Trump and Thomas Sowell.

Nuclear disarmament refers to both the act of reducing or eliminating nuclear weapons and to the end state of a nuclear-free world, in which nuclear weapons are completely eliminated. Do you think this, or President Trump’s plan, is the better U.S. policy?