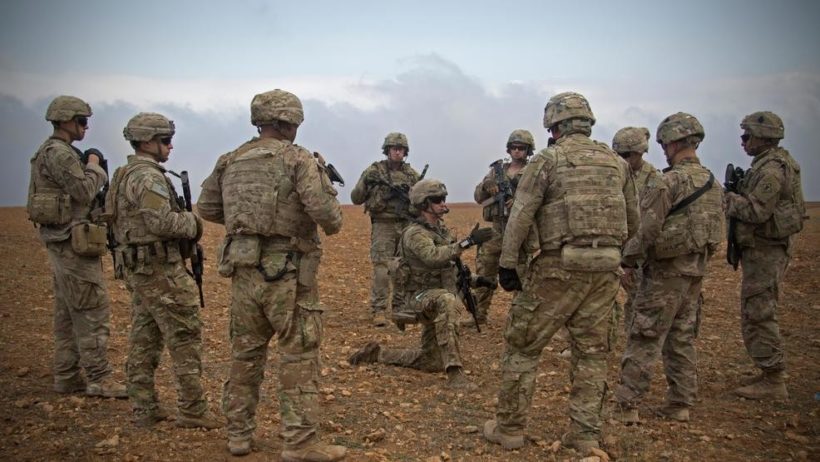 In this Nov. 7, 2018, photo released by the U.S. Army, U.S. soldiers gather for a brief during a combined joint patrol rehearsal in Manbij, Syria. (U.S. Army photo by Spc. Zoe Garbarino via AP)

(Compiled from UK Daily Telegraph and UK Daily Mail) – President Trump is pushing a plan to require allies with U.S. troops stationed in their countries to bear more of the cost for hosting the troops.

Several U.S. officials said Friday that the White House has asked the Defense Department to gather data on the costs of keeping troops in other countries and how much those nations contribute to the expenses.

As part of the “Cost Plus 50” plan, allies such as Japan and Germany would be asked to pay considerably more than they do now, Bloomberg News reports.

National Security Council spokesman Garrett Marquis said that getting U.S. allies to “increase their investment in our collective defense and ensure fairer burden-sharing” has been a long-standing U.S. goal.

“The Administration is committed to getting the best deal for the American people,” Marquis said in a statement issued Friday.

He declined to provide details on any ongoing deliberations.

Most NATO allies have a U.S. presence, but there are larger bases and military populations in countries such as Germany, England, Japan, Italy, Kuwait, Qatar and Bahrain.

It is understood that not all countries with US troops are being asked to pay “Cost plus 50,” with the exact extra percentage varying for each ally.

Furthermore the demand is seen as an opening position which may be negotiated down during talks.

The drive may be especially significant for Germany, which, according to an expert quoted by Bloomberg, currently pays just 28 per cent of the cost of US troops stationed there – around $1 billion.

Just last week, South Korea and the United States signed a deal that would increase Seoul’s financial contribution for the deployment of U.S. troops in the Asian country.

Bloomberg reported that those talks almost went off the rails after Trump gave his national security advisor, John Bolton, a note saying “We want cost plus 50,” overruling his negotiators.

After rounds of failed negotiations, chief delegates from the two countries last month agreed on Seoul paying about 1.04 trillion won, or $924 million, in 2019 for the U.S. military presence, up from about $830 million last year.

Compiled from articles on March 8 at UK Daily Telegraph by Ben Riley-Smith and UK Daily Mail by Geoff Earle with AP.  Reprinted here for educational purposes only.

4. What percent of the cost for U.S. troops in Germany does that country pay?

5. Following WWII, the U.S. stationed troops in allied countries to protect these countries, as well as our own interests (against the Soviet Union…). U.S. taxpayers paid the cost for troops overseas, as these countries’ economies were building up.

Per wikipedia, Germany is currently the largest national economy in Europe, the fourth-largest by nominal GDP in the world, and fifth by GDP (PPP). In 2017, the country accounted for 28% of the euro area economy. In 2016, Germany recorded the highest trade surplus in the world worth $310 billion, making it the biggest capital exporter globally.

The U.S. provides protection and partnership (joint military drills and training…) for our allies around the world. U.S. troops in South Korea and Japan serve as a deterrent against the aggressions of China and North Korea.

Is President Trump wrong to push allies to “pay their fair share”? Explain your answer.