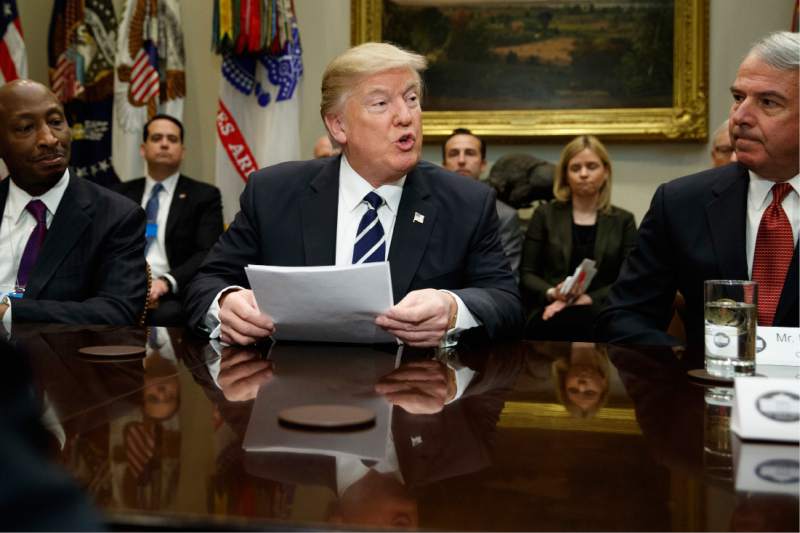 (by Roberta Rampton and Deena Beasley, Reuters) – U.S. President Donald Trump in a meeting on Tuesday with pharmaceutical executives called on them to manufacture more of their drugs in the United States and cut prices, while vowing to speed approval of new medicines and ease regulation.

Trump told them the government was paying “astronomical” prices for medicines in its [medicare and medicaid] health programs for older, disabled and poor people and said he would soon appoint a new U.S. Food and Drug Administration leader.

“We’re going to streamline the FDA,” President Trump said in a statement, referring to the regulatory agency responsible for vetting that new drugs are safe and effective.

…Attending the meeting were top executives [from pharmaceutical companies] Merck, Johnson & Johnson, Celgene, Eli Lilly, Amgen and Switzerland’s Novartis, as well as the head of the Pharmaceutical Research and Manufacturers of America (PhRMA) lobbying group.

According to a transcript of the televised portion of the meeting, Amgen Chief Executive Officer Robert Bradway promised to add 1,600 U.S. jobs at his California-based biotechnology company this year.

Amgen clarified in an email that it currently employs around 20,000 people worldwide, including 12,000 in the United States, and said the 1,600 includes new staff as well as hires to address attrition.

Celgene, Lilly, Merck and Amgen said by email after the meeting that they were encouraged by Trump’s focus on innovation, tax reform and the need for a more value-driven health care system. Kenneth C. Frazier, Chairman and CEO of Merck & Co makes remarks to President Trump during a meeting in the Roosevelt Room of the White House on January 31, 2017.

PhRMA echoed those points in its own post-meeting statement, adding that the policies, if enacted, would result in up to 350,000 new jobs over the next 10 years.

Officials at Novartis and J&J did not immediately respond to requests for additional comment. …

“We have to get prices down for a lot of reasons. We have no choice, for Medicare and Medicaid,” President Trump said, citing the nation’s government insurance programs for the elderly, the poor and the disabled.

President Trump also said currency devaluation by other countries had increased drugmakers’ outsourcing their production, and he called on the companies to make more of their products in the United States.

The United States typically pays more for drugs than any other developed nation….

High drug prices have become a national issue during the past two years as healthcare costs have risen.  Mr. Trump spooked pharmaceutical and biotech investors by saying on Jan. 11, before his inauguration, that drug companies were “getting away with murder” on what they charged the government for medicine and that he would do something about it. …

[“The U.S. drug companies have produced extraordinary results for our country, but the pricing has been astronomical for our country,” the president said after meeting with drug industry executives on Tuesday at the White House.

The U.S. needs to “do better” for Americans, Mr. Trump added, promising to boost industry competition to bring down prices. ]

2. What did President Trump tell the heads of the companies he would do to help them?

3. a) What is the role of the FDA?
b) What did the president say about the FDA?

4. a) How many people does Amgen employ in the U.S.?
b) How many jobs did the CEO promise to add this year?

5. a) What did Eli Lilly CEO Dave Ricks say would help his company expand operations?
b) What negative effect does outdated regulation have on the industry (or any industry)?
c) Define deregulation.

6. What overall reaction did the executives have to the meeting with President Trump?

Watch part of the news conference: