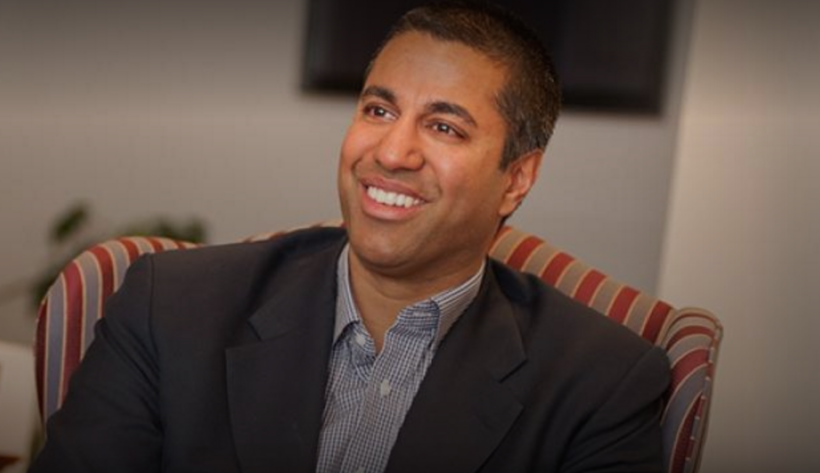 (by Stephen Lawson, IDG News Service at PC World) – President Donald Trump has named Commissioner Ajit Pai, an outspoken opponent of the FCC’s net neutrality rules, as the next head of the agency.

The choice was widely expected after Trump’s election last November. Pai is the senior Republican on the [five member] commission, having served since 2012. He doesn’t need to be confirmed by the Senate because he is already on the Commission.

Pai [criticized] the reclassification of broadband as a utility in 2015, saying it would place excessive burdens on service providers, other internet players and consumers. The expansion of broadband service through a competitive marketplace has been one of Pai’s [focuses] as a commissioner.

“I look forward to working with the new Administration, my colleagues at the Commission, members of Congress, and the American public to bring the benefits of the digital age to all Americans,” Pai said in a statement Monday.

Former FCC Chairman Tom Wheeler proposed the net neutrality plan and former President Barack Obama strongly supported it. Trump and Republicans in Congress have criticized the rules and are expected to target them as part of an overall push for deregulation.

Although Pai can take over as chairman without a confirmation vote, he will need to be renominated and reconfirmed by the Senate at the end of this year when his current term on the Commission expires.

The FCC customarily includes three members from the president’s party and two from the opposition. If Trump follows suit, he will name one more Republican and one more Democrat. In addition to Pai, Democrat Mignon Clyburn and Republican Michael O’Rielly are on the Commission now.

Pai grew up in Parsons, Kansas, the son of immigrants from India, according to his biography on the FCC’s site. In addition to several positions as an attorney in the federal government, he was an associate general counsel at Verizon from 2001 to 2003.

Stephen Lawson is a senior U.S. correspondent for the IDG News Service based in San Francisco.

Reprinted here for educational purposes only. May not be reproduced on other websites without permission from PC World. For the original article, visit PCWorld .com.

2. How many members does the FCC have? How are party affiliations determined?

3. Why is Ajit Pai able to take over as chairman without a confirmation vote?

4. How did Mr. Pai explain his opposition to “net neutrality” which reclassified broadband as a utility in 2015?

5. a) Who wants the government to regulate the internet through net neutrality rules?
b) Who is opposed?

The FCC is about to get rid of a Clinton-era bipartisan agreement that the Internet should be free from intrusive government regulation. [During Bill Clinton’s administration, Democrats and Republicans agreed that the government shouldn’t regulate the internet.]

It will decree, based on a vaguely defined “Internet conduct” standard, whether companies can offer consumer-friendly service plans (such as T-Mobile’s Music Freedom program, which offers customers unlimited access to streaming music).

These Internet regulations will deter broadband deployment, depress network investment and slow broadband speeds. How do we know?:

Compare Europe, which has long had utility-style regulations, with the U.S., which has embraced a light-touch regulatory model:

Broadband speeds in the U.S., both wired and wireless, are significantly faster than those in Europe. Broadband investment in the United States is several multiples that of Europe. And broadband’s reach is much wider in the United States, despite its much lower population density.

So why is the FCC swinging the regulatory sledgehammer? It’s not to guarantee an open Internet. Nowhere in the 332-page plan – which you won’t see until after the FCC votes on it – can one find a description of systemic harms to consumers or entrepreneurs online. And small wonder, for the Internet is open today. Consumers can easily access the content of their choice. Online entrepreneurs can and do innovate freely.
(from a 2015 commentary by Ajit Pai “Internet Freedom Works”)

a) What are your thoughts on Mr. Pai’s assertions?
b) Ask a parent to read the excerpt from Pai’s commentary and answer the same question.

CHALLENGE:
Do an internet search for “Ajit Pai named FCC chairman.”
Pay attention to the headlines on this issue. Are most of the headline positive, negative or neutral? (Do they imply that Pai is a good choice to head the FCC, a bad choice, or do they just announce that Pai has been chosen?) (Do they cause you to view net neutrality favorably, unfavorably, or neither?)

FOR DISCUSSION:
Ask a parent: Do you generally support government regulation or deregulation? Please explain your answer.

The agency is directed by five commissioners who are appointed by the President and confirmed by the Senate.

The president also selects one of the commissioners to serve as chairman.

Only three commissioners can be of the same political party at any given time and none can have a financial interest in any commission-related business.

All commissioners, including the chairman, have five-year terms, except when filling an unexpired term.

The FCC has 1,720 federal employees. (from the FCC website and wikipedia)

Read a November 2014 commentary on the Obama administration’s plan to implement net neutrality: The Department of the Internet