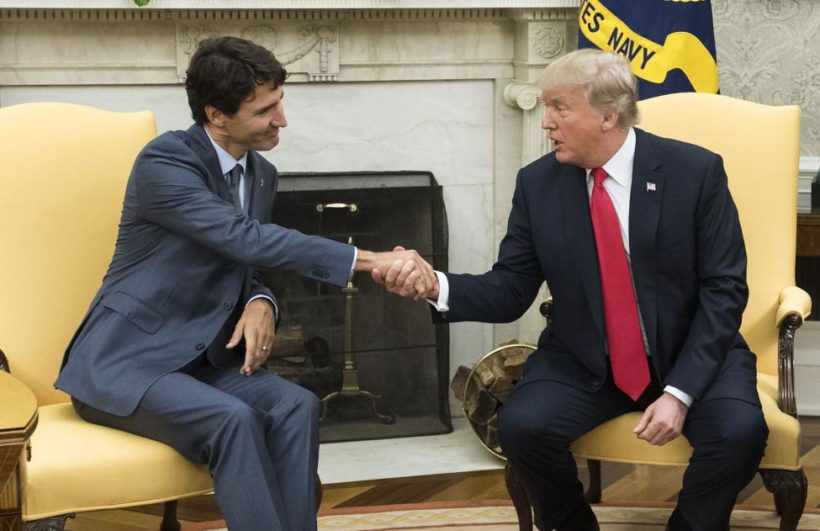 (by Nicholas Sakelaris, UPI) — A historic new trade agreement with Canada represents a “new dawn for the American auto industry” that will transform the United States back into a “manufacturing powerhouse,” President Donald Trump said Monday.

“Today we have kept that promise,” Trump said. “But for 25 years as a civilian and businessman I used to say, ‘How could anyone sign such an agreement?’ With this [new] agreement we are closing all of these terrible loopholes, they’re closed, they’re gone. They were a disaster.”

The replacement for NAFTA includes new provisions on digital trade and intellectual property.

[“Mexico and Canada have agreed to strong new labor protections, environmental protections and new protections for intellectual property,” Trump said at a press conference Monday. “This new deal is an especially great victory for our farmers.”]

The agreement will benefit farmers, ranchers and automobile workers, Trump said. Under the agreement, 75 percent of every automobile must be built in North America. The auto industry in particular, which was hit hard by NAFTA, will see the biggest benefit.

“We will be manufacturing many more cars,” Trump said. “Our companies won’t be leaving the United States, firing their workers and building their cars elsewhere. There’s no longer that incentive.” .

[“For example, we [will] require a large portion of every car to be made by high-wage workers, which will greatly reduce foreign outsourcing which was tremendous problem,” he said. “More automobiles and parts will be manufactured inside the United States. We will be manufacturing many more cars and our companies won’t be leaving the United States, firing their workers and building their cars elsewhere.”]. [“It is a great deal for all three countries,” Trump wrote on Twitter.]

Trump’s hard line on trade is having an impact far beyond North America, with Japanese Prime Minister Shinzo Abe saying more automakers will be moving factories to the United States.

The threat of tariffs has brought India to the negotiating table and Trump said he’s confident other countries, too.

“Without tariffs, we wouldn’t be talking about a deal,” Trump said. “Japan is wanting to negotiate. India, the tariff king, also wants to negotiate.”

The USMCA is regarded by some a big policy win for Trump and Republicans heading into the Nov. 6 midterm elections. It’s unclear how long it will take to ratify the deal, since the U.S., Mexican and Canadian governments must approve it.

1. How did President Trump describe the new trade agreement he introduced in a press conference on Monday?

2. a) What is the name of the new trade deal the Trump administration signed with Canada?
b) What trade deal does it replace?
c) Name the third country that is a partner in this deal.

3. How much is the trade agreement the Trump administration made with the two countries worth?

4. President Trump has used the slogan “Promises Made. Promises kept.” What campaign promise does the U.S.-Mexico-Canada trade deal fulfill?

5. Peter Navarro is an economist and the Director of the White House National Trade Council. Watch the clip from an interview with Mr. Navarro (under “Resources” below). What is the tone of Mr. Navarro’s responses?

6. Free, fair and reciprocal trade relations are a key component of the President’s strategy to promote American prosperity. Define reciprocity and reciprocal.

CHALLENGE: In addition to reading a news report on an event, it is important to watch the original event to see what the person actually says him/herself. Especially in the case of President Trump. Critics warned that he would cause a lot of problems by imposing tariffs on our allies and close trading partners. There are few/no major media reports that provide positive reporting on this historic accomplishment that many Democrats also support. Watch the 4 video clips from President Trump discussing the USMCA trade deal and answer the following questions.

e) FOR VIDEO #3: What does President Trump say about his relationship with Prime Minister Trudeau of Canada?
f) FOR VIDEO #3: How did he explain tariffs and the U.S. trade deal with China?

g) FOR VIDEO #4: What does the president say about trade and tariffs with India – and about Prime Minister Modi of India?

The Office of the United States Trade Representative (USTR) is the government agency responsible for developing and recommending U.S. trade policy to the President, conducting trade negotiations at bilateral and multilateral levels, and coordinating trade policy within the government. The USTR is part of the Executive Office of the President. President Trump’s U.S. Trade Representative is Ambassador Robert Lighthizer, who was confirmed by the Senate in May 2017.

Read details of the U.S. Mexico Canada Trade Agreement from the USTR website:

President Trump’s campaign provides a website, PromisesKept.com, that details the promises he has fulfilled while in office.

VIDEO #2 – President Trump explains how the new trade deal will help – and how NAFTA hurt American workers and companies:

VIDEO #3 – President Trump answers a reporter’s questions on his relationship with Prime Minister Trudeau and tariffs/trade with China: