Trump: Ban all Muslim travel to the U.S. 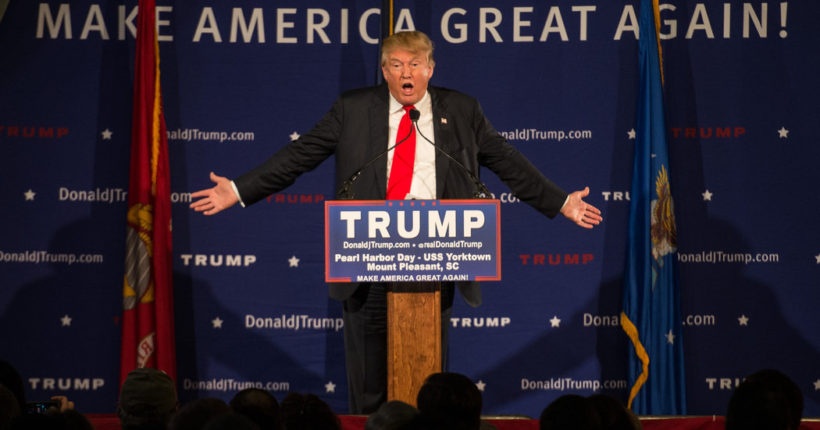 “What I’m doing is no different than FDR,” Trump said on ABC’s “Good Morning America” program in one of a round of heated television interviews where he defended his plan in the wake of last week’s California terrorist attack by two Muslims who authorities said were radicalized.

“We have no choice but to do this,” the candidate seeking the Republican nomination in the 2016 presidential race told ABC. “We have people that want to blow up our buildings, our cities. We have figure out what’s going on.”

In an unusually lengthy interview on MSNBC, Trump said he did not know how long the ban on Muslims would last. “Until we can get our hands around the situation, we have to do something and we have to do it now,” he said.

Critics have said Trump’s plan rejects American values by singling out people based on their religion and would also likely be illegal and unconstitutional. The First Amendment of the U.S. Constitution guarantees freedom of religion.

Trump’s was the most dramatic response by a presidential candidate following the San Bernardino, California, terrorist attack, even as other Republicans have called for a suspension to U.S. President Barack Obama’s plan to allow 10,000 refugees from Syria.

The proposal drew a fresh wave of criticism on Tuesday from fellow Republicans, U.S. lawmakers and both Democratic and Republican presidential candidates.

U.S. House of Representatives Speaker Paul Ryan, a Republican, told reporters the plan is “not conservatism” and was not in the nation’s interest.

The proposal was criticized in France, which had its worst attacks since World War Two on Nov. 13 when shootings and suicide bombings in Paris killed 130 people.

French Prime Minister, Manuel Valls, a socialist, in a post on Twitter, said “Mr Trump, like others, is feeding hatred and misinformation. Our only enemy is radical Islam.”

On Tuesday, Trump reiterated that a ban would last until Congress acts. He also said that under his proposal Muslim Americans would be allowed back into the country after an overseas trip – he was only talking about banning Muslims who were not citizens from coming into the country….

In a confrontational exchange with CNN anchor Chris Cuomo, Trump defended such measures as necessary: “We’re at war. Get it through your head, Chris.”

Still, he said he did not support internment camps, which Roosevelt had set up during World War Two.

“I don’t want to bring them back at all,” Trump said on ABC. He added his plan had “tremendous support” from thousands of people who “just want to see something happen.”

Polls have shown a stark divide between Republicans and Democrats in how they view Muslim immigration to the U.S.

…On Tuesday, Trump dismissed the prospect of the party rebuking him for his comments. “There’s no problem. I’m just doing the right thing,” he told CNN.

2. Why does Mr. Trump say his plan is necessary? Be specific.

3. For what reasons are critics opposed to Mr. Trump’s plan?

4. How have fellow Republicans, as well as Democratic and Republican presidential candidates, responded to Trump’s call to ban Muslims from coming to the US?

5. a) How did French Prime Minister Manuel Valls react to Mr. Trump’s comments?
b) Do you think than any U.S. presidential candidate should be concerned with how a European leader, or (from paragraph 12) international refugee organizations, or Muslims in Pakistan and Indonesia, view his/her statements on U.S. immigration policy? Explain your answer.

OPTIONAL: Read a commentary by James Taranto at today’s Best of the Web post. Do you agree with Mr. Taranto’s observations? Explain your answer.

(New York, NY) December 7th, 2015, — Donald J. Trump is calling for a total and complete shutdown of Muslims entering the United States until our country’s representatives can figure out what is going on. According to Pew Research, among others, there is great hatred towards Americans by large segments of the Muslim population. Most recently, a poll from the Center for Security Policy released data showing “25% of those polled agreed that violence against Americans here in the United States is justified as a part of the global jihad” and 51% of those polled, “agreed that Muslims in America should have the choice of being governed according to Shariah.” Shariah authorizes such atrocities as murder against non-believers who won’t convert, beheadings and more unthinkable acts that pose great harm to Americans, especially women.

Mr. Trump stated, “Without looking at the various polling data, it is obvious to anybody the hatred is beyond comprehension. Where this hatred comes from and why we will have to determine. Until we are able to determine and understand this problem and the dangerous threat it poses, our country cannot be the victims of horrendous attacks by people that believe only in Jihad, and have no sense of reason or respect for human life. If I win the election for President, we are going to Make America Great Again.” – Donald J. Trump

The following are tweets sent out by Trump’s fellow presidential candidates in response to his proposal:

Democrat Hillary Clinton:
“Tell Donald Trump: Hate is not an American value,”  and  “This is reprehensible, prejudiced and divisive. @RealDonaldTrump, you don’t get it. This makes us less safe.”

Democrat Martin O’Malley:
“@RealDonaldTrump removes all doubt. He is running for president as a fascist demagogue.”

Republican Jeb Bush:
“Donald Trump is unhinged. His “policy” proposals are not serious.”

Republican Chris Christie said in an interview:
“…you do not need to be banning Muslims from the country. That’s, in my view, that’s a ridiculous position and one that won’t even be productive.”

Former Vice President Dick Cheney, in a radio interview said:
“This whole notion that somehow we can just say no more Muslims, just ban a whole religion, goes against everything we stand for and believe in,” he said. “I mean, religious freedom has been a very important part of our history and where we came from.”