Trump announces his support for criminal justice reform legislation, saying it’s ‘the right thing to do’ 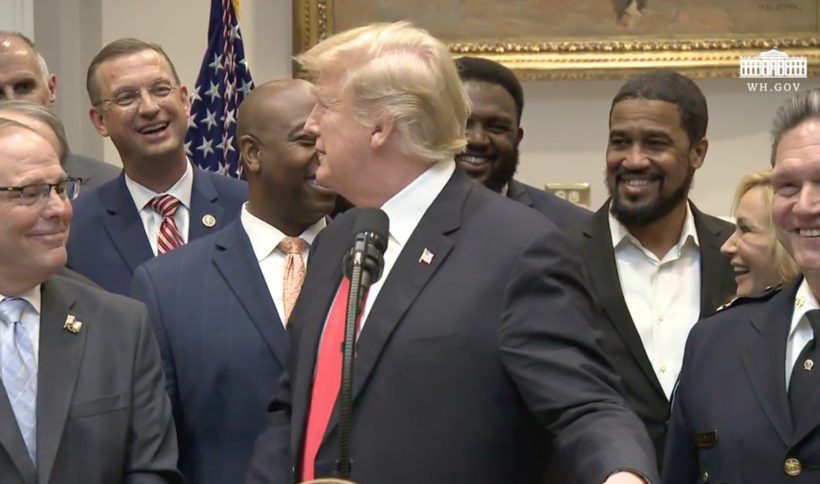 President Donald Trump announced in a press conference Wednesday that he was thrilled to announce his support for the First Step Act, a criminal justice reform bill.

“Today, I am thrilled to announce my support for this bipartisan bill that will make our communities safer and give former inmates a second chance at life after they have served their time,” Trump said during brief remarks in the Roosevelt Room.

“We’re all better off when former inmates can receive and re-enter society as law-abiding, productive citizens,” Trump said in brief remarks in the Roosevelt Room of the White House. “And thanks to our booming economy, they now have a chance at more opportunities than they’ve ever had before.” Trump added that the White House pledge “to ‘Hire American’ includes those leaving prison and looking for a very fresh start — new job, new life.”

The First Step Act, the first major rewrite of the nation’s criminal justice sentencing laws in a generation, will boost rehabilitation efforts for federal prisoners and give judges more discretion when sentencing nonviolent offenders, particularly for drug offenses.

In particular, the bill lowers the mandatory minimum sentence for non-violent repeat drug offenders from 25 to 20 years, reduces mandatory minimums for other crimes from 20 to 15 years, and makes no distinction between powder cocaine and crack cocaine.

The Senate package overhauls some of the mandatory sentencing guidelines that have been in place since 1994 legislation approved by Congress and signed into law by then-President Bill Clinton. …Trump noted that several law enforcement organizations supported the effort, saying: “In many respects, [we’ll be] getting very much tougher on the truly bad criminals, which, unfortunately, there are many. But [we’ll be] treating people differently for different crimes.”

The president’s support is a big win for activists who have been pushing for criminal justice measures to roll back the stiff penalties imposed as a part of America’s decades-long “war on drugs.”

Supporters of sentencing provisions argue that mandatory minimum sentences and other policies have disproportionately affected African-American and Hispanic communities, while doing little to curb crime.

When announcing his support for the bipartisan measure that would overhaul the nation’s criminal justice system, the president said, “it’s the right thing to do.”

“Americans from across the political spectrum can unite around prison reform legislation that will reduce crime while giving our fellow citizens a chance at redemption, so if something happens and they make a mistake, they get a second chance at life,” Trump told reporters at a White House event.

Sens. Chuck Grassley, R-Iowa, and Dick Durbin, D-Ill., called Trump’s endorsement “an important step in our shared effort to promote safe communities and improve justice.” Grassley, the chair of the Senate Judiciary Committee, and Durbin, the Senate’s second-ranking Democrat, have led the bipartisan effort to overhaul the guidelines.

The House approved a prison reform bill in May, but the Senate package makes additional changes and adds the sentencing component.  All but two Republicans voted for the House bill when it was overwhelmingly approved in May, 360-59. Democratic lawmakers supported the bill by about a 2-to-1 margin, but opponents voiced concerns that it did not go far enough in giving judges more discretion to make the punishment fit the crime.

The House bill directs the Bureau of Prisons to conduct assessments for every offender once he or she is sentenced and to offer rehabilitation plans designed to lower the chance of recidivism. The plans would include vocational training, education, counseling and substance abuse treatment.

The Senate approach would allow thousands of federal prisoners sentenced for crack cocaine offenses before August 2010 the opportunity to petition for a reduced penalty. It would also lower mandatory minimum sentences for some drug offenses. The life sentence for some drug offenders with three convictions, or “three strikes,” would be reduced to 25 years.

Roughly 90 percent of prison inmates are held in state facilities and would not be affected by the legislation.

The president’s support is crucial to the effort, supporters say, particularly given the limited time available before a new Congress is seated early next year. Trump urged Congress to pass the measure quickly during the lame-duck session of Congress.  Senate Majority Leader Mitch McConnell, R-Ky. was cautious about the bill’s prospects Wednesday. He told reporters that GOP leaders would do a whip count to gauge the bill’s support once they have a final proposal in hand.

Still, he noted the Senate has other things it needs to accomplish in the final weeks of the year, including funding the government and passing a farm bill. He said Republicans would have to see how the criminal justice bill “stacks up against our other priorities” once a final agreement is reached.

Compiled from reports at CNN, Fox News/AP, NPR and CNBC.

3. Why do supporters of the First Step Act oppose mandatory minimum sentences?

4. What does the House bill direct the Bureau of Prisons to do?

5. What additional changes does the Senate bill make?

6. During his announcement, President Trump said, “Americans from across the political spectrum can unite around prison reform legislation that will reduce crime while giving our fellow citizens a chance at redemption, so if something happens and they make a mistake, they get a second chance at life.” He also said, “it’s the right thing to do.” Do you agree with this assertion? Explain your answer.
-Watch an excerpt from the President’s comments in the video under “Resources”
-Read an op-ed supporting the legislation: Time to pass the First Step Act