Trifecta of Air Force bombers to fly over Super Bowl 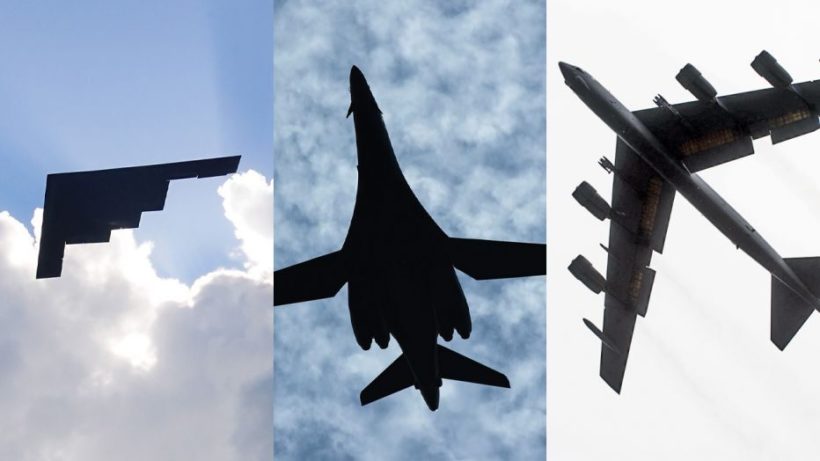 (Compiled from Air Force Mag, Dakota News Now and Fox4 Kansas City) – The Air Force will mount a first-of-its-kind flyover of Super Bowl LV with all three types of strategic bombers, the service announced Jan. 25. The event will take place over Raymond James Stadium in Tampa, Fla., on Feb. 7.

The flyover, timed to coincide with the National Anthem, will include the 3 types of bombers:

Though the three have flown joint flyovers in airshows previously, this will be the first such formation over a Super Bowl.

“The aircraft will take off … from their respective bases, join up for the flyover, and return to base following the event, demonstrating the flexibility” of Air Force Global Strike Command’s (AFGSC) bombers “and their ability to deploy anywhere in the world from the continental U.S.,” the Air Force said.

The service noted that it performs nearly 1,000 flyovers every year, and the missions serve “as a way to showcase the capabilities of its aircraft while also inspiring patriotism and future generations of aviation enthusiasts.” The flyovers don’t incur a cost to taxpayers, as they are counted as “time over target” training for aircrews and ground control teams, the Air Force pointed out.

Gen. Timothy M. Ray, AFGSC commander, said supporting the event is “a tremendous honor for our command and the U.S. Air Force,” and is an opportunity to demonstrate “the reliability, flexibility, and precision of our bomber fleet to the nation during this exciting event.”

All of the aircraft will be coming from different bases to “demonstrate the flexibility of AFGSC’s bombers and their ability to deploy anywhere in the world from the continental United States.”

Major Michael Webster is one of four airmen who will be on the B-1 leaving from Ellsworth Air Force Base.

“I’m a huge sports fan huge football fan so this is an amazing opportunity, a huge deal there’s only been 55 Super Bowls and not all of them have had flyovers. So it’s a very limited few people who have gotten to be a part of this. It’s an incredible honor and I’m super pumped.”

Webster also says that it’s an honor to have a bomber from the Ellsworth Air Force base featured on a national stage.

While there is still a lot of preparation to be done before Sunday, the airmen are more excited than anything else.  “I’m super excited and fortunate to be part of the crew that will actually be flying over the Super Bowl,” said another crewman.

Pilot Capt. Sarah Kociuba, who is leading the charge flying a B-2 Spirit, will take off from Whiteman Air Force base in Missouri. The three bombers will meet up over the Gulf of Mexico, just outside the Tampa airspace.

Kociuba, who said she was inspired to join the Air Force after seeing her first B-2 flyover at the Rose Bowl parade, will be in constant communication with the grounds crew inside Raymond James Stadium.

“Obviously a very dynamic schedule that could change quite often as we’re in the air,” Kociuba said. “So, he will constantly be talking to me as I am managing the formation to ensure that we are the stadium at the right time.”

The bombers will get low and go fast — clocking anywhere from 250 mph to 300 mph.  After the flyover, they will continue training and meet up with tankers* to get gas [*Air Force tankers refuel bombers in the air].

“We’ll all probably be flying around 7 to 9 hours,” Kociuba said.

The three bombers made several practice runs throughout the week leading up to the Super Bowl.

The Air Force’s Thunderbirds provided the flyover for Tampa’s last Super Bowl in 2009.

1. List the 3 types of Air Force bombers that will perform a flyover at Sunday’s Super Bowl – and which AFB each one is coming from.

2. For what reason is the Air Force using bombers from 3 different bases?

3. What makes this flyover “a first-of-its-kind”?

4. a) How many flyovers does the Air Force Global Strike Command conduct every year?
b) What is the purpose of the flyovers?

6. How would you describe the mood/tone of the crews taking part in the flyover?

In a first-of-its-kind trifecta flyover during the National Anthem at the Superbowl in Tampa on Feb. 7 are the three bombers:

Air Force Global Strike Command was established for the improvement of the management of the USAF portion of the United States’ nuclear arsenal, which accounts for two-thirds of America’s nuclear deterrent. It assumed responsibility for the nuclear-capable assets of Air Force Space Command on 1 December 2009 and the nuclear-capable assets of Air Combat Command on 1 February 2010.

The mission of Air Force Global Strike Command is to “Develop and provide combat-ready forces for nuclear deterrence and global strike operations –Safe –Secure –Effective to support the President of the United States and combatant commanders.”

What to expect for the flyover – 10TampaBay: