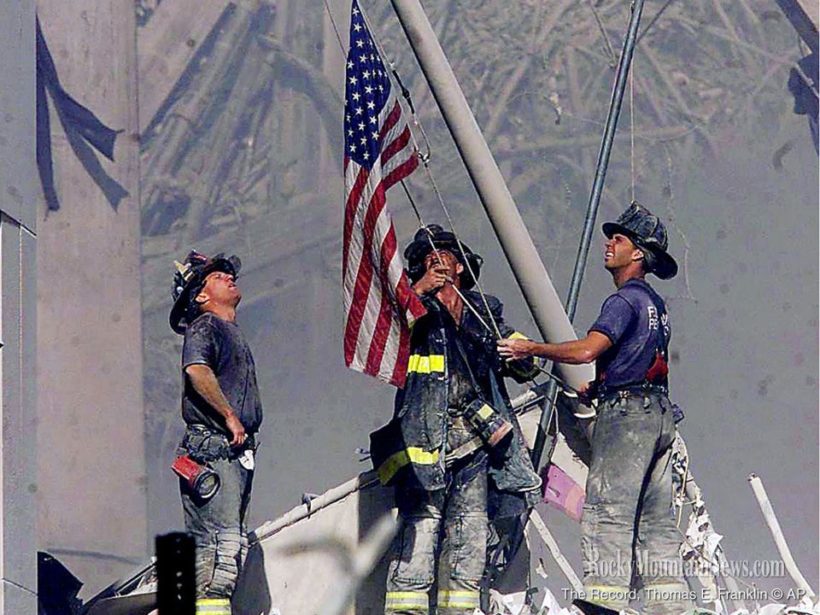 Raising the Flag at Ground Zero taken by Thomas E. Franklin of The Bergen Record (NJ). The picture shows three New York City firefighters raising the American flag at Ground Zero of the World Trade Center, following the September 11 attacks. The firefighters pictured were Brooklyn-based firefighters George Johnson of Rockaway Beach, Dan McWilliams of Long Island (both from Ladder 157), and Billy Eisengrein of Staten Island (Rescue 2). The flag came from the yacht Star of America, owned by Shirley Dreifus and her late husband Spiros E. Kopelakis, of the Majestic Star, which was docked in the yacht basin in the Hudson River at the World Financial Center. McWilliams cut the yardarm off of the yacht with a K-Saw and then took the flag and its pole from the yacht to an evacuation area on the northwest side of the site. They found a pole about 20 feet off the ground.

NOTE: This article is reprinted from a September 9, 2011 Daily News Article:

(by Stephanie Farr, Philly .com) – [In 2011], a decade after the 9/11 terrorist attacks at the Pentagon, New York City and Shanksville, Pa., family and friends of the fallen [visited] these consecrated spots, and the official memorials at Ground Zero and Shanksville [were] unveiled.

Shanksville
The 250-acre memorial in Somerset County in western Pennsylvania, which honors the victims of Flight 93, is not just a memorial. It’s a cemetery.

A 17-ton sandstone boulder near a mature hemlock grove at the edge of the park marks the spot where the plane hit the ground, exploding on impact. Only 8 percent of the human remains from passengers were found, and when the coroner sent cadaver dogs to sniff around the hemlock grove, the dogs just sat down, said Keith Newlin, superintendent of the memorial.

“So, in other words, they’re here. They’re still here,” Newlin said, pointing to the hemlock grove. “This is a cemetery.”

Because of years of construction, visitors to the site have been relegated to the park’s western overlook, but on [Sept. 11, 2011], the main memorial and wall of names open[ed]. The entire park [opened] in 2017, including a new visitors center and a memorial grove of 40 trees to represent each victim.

Unlike the memorials at the Pentagon and Ground Zero, which many people visit as part of planned trips to D.C. or New York, visitors to Shanksville have to make an effort to find the memorial, which is about 20 minutes from the closest highway.

Perhaps that extra effort is fitting, because what sets Flight 93 apart from the others is that the passengers were not only vividly aware that they were part of a coordinated attack, they fought back and prevented the plane from reaching its intended target – reportedly the U.S. Capitol building.

To Mary Duranko, 62, who came from Johnstown, Pa., to visit the memorial, the passengers of Flight 93 are more than victims. They’re heroes.

“They knew their destination. It was inevitable and they gave their lives,” she said. “That’s a big decision. I don’t know if I could have made it.”

Before the park closed on a recent evening, as visitors started to file out, an older gentleman in an NYPD T-shirt walked away from the site with tears in his eyes. In his right hand was one of the small American flags that visitors place on the fence at the overlook in remembrance.

The 69-year-old New Yorker, who preferred not to give his name, said that he lost many friends on 9/11, including his partner. He said that he worked for months at Ground Zero cleaning rubble and had made a promise to himself to “be here” in Shanksville one day. …..

Pentagon
While men and women in Army fatigues rushed in and out of the Pentagon in Northern Virginia, all was calm at the nearby memorial.

The sound of running water, so integral to the memorial’s design, seemed to drown out even the traffic from nearby Route 27 and the thrumming helicopters above.

Benches, made to look like airplane wings, each bear the name of a victim. They’re arranged diagonally along the flight path of Flight 77, with those facing one way honoring victims on the plane and those facing the other direction commemorating people killed inside the Pentagon.

Janice Tate, 66, of Madison, N.C., liked the way each individual was honored.

“If it was my family member, I’d very much appreciate sitting on my loved one’s bench and listening to the water,” she said.

Brad Palmer, of Ontario, Canada, who was visiting D.C. with his wife and two boys, decided to bring them all to the memorial on his 52nd birthday.

He did so, he said, because 9/11 was “huge” in Canada. When all air travel was grounded in the wake of the attacks, many planes were rerouted to Canada, where locals took in stranded travelers.

“Obviously, it was specific to the United States,” he said. “But it touched people all over the world that day.”

Ground Zero
With the finishing touches of the memorial still under way, visitors observed the progress from the second floor of the nearby World Financial Center.

Matte Tonna, 43, of Parma, Italy, brought his wife and three children to see the site on their first visit to New York City.

“It was something that touched the minds and souls of everybody in the world,” he said. “We would like our children to experience this, to let them see firsthand the scene of this tragedy.”

But just two weeks before it was to open, the site still looked like any other construction zone.

“We are a little bit unimpressed,” Tonna said. “But, if this is all we can see, so be it. We will come back.”

Nearby, Marie Livanos, 53, pointed out pending structures to her five guests from Long Island and Israel.

Livanos was working at a law firm on the 40th floor of the second tower when the first plane hit the other tower. Although she would speak little of it, Livanos’ guests said that she was instrumental in helping her colleagues get out alive.

In 2003, Livanos’ law firm moved in to the World Financial Center, where Livanos can see Ground Zero every day.

“At first, when you would look out the window, you saw something that was not there,” she said. “Now, when you look out, you see hope. We see hope, rebuilding and future. It’s like a little phoenix coming up from the ashes.”

One of Livanos’ guests, Alon Roitman, 18, of Tel Aviv, Israel, said that terrorist attacks are a regular occurrence in his country.

“Who better to show us how to get through them than America?” he asked. “This shows the power of democracy and the strength that comes out of rising and building ourselves up again.”

NOTE TO STUDENTS: Before answering the following questions, read the “Background” and look through the “Resources”.

1. Answer the following questions about 9/11:
a) Who was President on 9/11?
b) Who was the mayor of New York City on 9/11?
c) How many planes were hijacked on 9/11? What were their flight numbers and where did each crash?
d) What three locations were the terrorists targeting?
e) At what time did each plane hit (time, place and flight number)?
f) Who were the terrorists? (religious ideology and terror group)
g) How many people were killed on 9/11?
h) Describe the first World Trade Center bombing in 1993.

2.  How is the memorial in Shanksville different from those at the Pentagon and Ground Zero?

4.  Describe the setup of the Pentagon memorial.

5.  What similar sentiment did Canadian Brad Palmer and Italian Matte Tonna share about their reason for visiting the Pentagon and Ground Zero sites?

7. What do you know about what actually happened on September 11, 2001 as a result of the actions of al Qaeda terrorists?
(For a timeline of what happened that day, go to timeline.911memorial.org/#Timeline/2)
a) Read the “Background” then watch the videos and visit some of the links under “Resources” below to gain an understanding of what people experienced that day. List 2-3 things you did not already know about 9/11 from this information that you think is important for all Americans to know.
b) Regarding 9/11, people say “Never Forget.” Why do you think this is important?

8. Wikipedia states “On a typical weekday 50,000 people worked in the towers with another 200,000 passing through as visitors.” Many people believe that God’s mercy spared them – and there were many stories of miracles that day. What do you think?

9. Ask a parent and a grandparent: What do you remember about 9/11?

What do you know about the first World Trade Center terrorist attack in 1993?

See videos below the links.

Inside the world trade center while collapse: