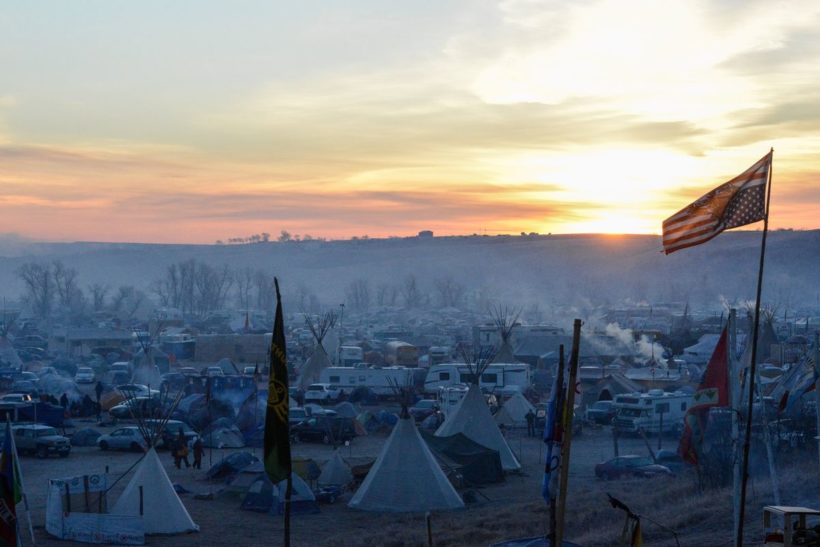 The Oceti Sakowin camp is seen at sunrise during a protest against plans to pass the Dakota Access pipeline near the Standing Rock Indian Reservation, near Cannon Ball, North Dakota, Nov. 2, 2016. (Photo: Stephanie Keith / Reuters)

(by Josh Siegel, The Daily Signal) – …Wednesday (Nov. 30) was the 113th day of protests over the Dakota Access pipeline, which has become a complex battle—sometimes involving violent clashes between police and demonstrators—over tribal rights, energy development, and the environment.

Cody Schulz, chairman of the Morton County Commission in North Dakota, “The local residents of Morton County are fatigued and frustrated.”

Last Monday [Nov. 28], North Dakota Gov. Jack Dalrymple, a Republican, ordered a mandatory evacuation of protesters seeking to block construction of the Dakota Access pipeline, a 1,170-mile transport vessel that would carry as much as 500,000 barrels of crude oil daily from the Bakken production region of North Dakota to an existing pipeline in Patoka, Illinois.

…Morton County, just above the southern border of North Dakota, has a population slightly under 29,000, making it one of the state’s most populous counties. Thousands are protesting at camps located on U.S. Army Corps of Engineers land [federal government land], north of the Cannonball River in Cannon Ball, North Dakota.

Both the state of North Dakota and the U.S. Army Corps of Engineers say they have no plans for “forcible removal” of the protesters, an eclectic mix that includes members of Native American tribes, liberal activists, and environmentalists. …

As the controversy rages on, The Daily Signal examines key factors contributing to division over the pipeline, and how the various parties may move forward. The Standing Rock Sioux, a tribe of about 10,000 leading the protests, fear the Dakota Access pipeline could pollute the Missouri River, the tribe’s main source of drinking water, and harm sacred cultural lands and tribal burial grounds.

Standing Rock is contesting a segment of the pipeline planned to run under Lake Oahe, a reservoir formed by a dam on the Missouri River.

The tribe, working with the environmental group Earthjustice, filed suit July 27 against the Army Corps of Engineers, arguing the government did not properly consult them before approving the section of pipeline near the Standing Rock Indian Reservation. This litigation is ongoing, although the U.S. District Court in Washington, D.C., refused to halt construction of the pipeline while the case winds through the legal system.

Energy Transfer Partners, the company building the pipeline, says it has followed federal and state rules, and argues that the project is a safer and cleaner way to transport crude oil from fields to refineries.

It says it adequately met with Native American tribes, and proposed different variations of the pipeline’s route.

The company says its pipeline does not enter the Standing Rock reservation. In November, it filed a countersuit in the same federal court asking to proceed with the $3.7 billion project.

The pipeline is 92 percent complete, and just a small portion of it nearest to the Standing Rock reservation remains in limbo, as the Army Corps of Engineers decides whether to grant a final permit for Energy Transfer Partners to finish it.

On Nov. 2, President Barack Obama issued a statement saying the Army Corps “is examining whether there are ways to reroute this pipeline.”

“We’re going to let it play out for several more weeks and determine whether or not this can be resolved in a way that I think is properly attentive to the traditions of the first Americans,” Obama said.

But on Tuesday, the White House said it is not aware of “any impending presidential actions” in the foreseeable future. …

Aseem Prakash, director of the Center for Environmental Politics at the University of Washington, contends that the Standing Rock tribe’s stake in the conflict reflects deeper-seated grievances of Native Americans.

“The American Indian community, at least some sections of it, is aggrieved over the years about [perceived] injustices, essentially the notion being—right or wrong—that their preferences are not taken into account seriously,” Prakash told The Daily Signal in an interview. “The Dakota pipeline is epitomizing their perspective of injustice.”

Though the pipeline goes through private land and not Native American property, the tribe contends this land was acquired improperly and actually belongs to them by the terms of an 1851 treaty with the U.S. government.

North Dakota’s at-large member of the House of Representatives, Republican Kevin Cramer, acknowledges the tribe’s grievances and says they are exasperated by high rates of poverty in the Native American community.

But Congressman Cramer sees these “legitimate concerns” as being clouded by the tribe’s alliance with environmental groups that have broader concerns about pipelines in general:

The biggest losers in their issues being heard are the tribes. The concern of the environmentalists are not based on intellect or knowledge or reality, and I think all of that dilutes legitimate concerns of the tribes that call out for broader discussion.

Indeed, after successfully influencing the Obama administration to reject the Keystone XL oil pipeline, environmental groups latched onto the North Dakota project as the next frontier as it aims to limit fossil fuel use and delivery.

“For environmentalists, this is an excellent alliance,” Prakash said, adding:

This is a very good opportunity for them because the best way to bankrupt fossil fuel companies is to target the supply chain—the modes of transportation. Some tribe members think their issues are being hijacked. For them, this is not a war on fossil fuel. It’s a specific argument about not honoring the historical practices of Native Americans and about rerouting this particular pipeline.

… Even after the pipeline’s future is resolved, local officials say, they recognize the underlying feelings that drove the protests won’t be healed quickly.

“Healing begins with sitting down in the same room and talking,” Schulz said. “It will take some time. If you can get to mutual understanding, even if it’s not agreement, that’s a step forward. Morton County and Standing Rock have been friends and neighbors for generations, and that won’t change.”

Josh Siegel is the news editor for The Daily Signal. Reprinted here for educational purposes only. May not be reproduced on other websites without permission from The Daily Signal. Visit the website at dailysignal .com.

1. For how many days have protests taken place over the Dakota Access Pipeline?

2. List the issues protesters are concerned about in general.

4. What groups are part of the protests?

6. How has the company building the pipeline, Energy Transfer Partners, defended its construction?

7. The area of the pipeline that is the center of the controversy must be granted permits from the federal government. How has President Obama addressed the continuing protests and controversy?

Media reports have documented violent clashes between police and protesters. Authorities have used rubber bullets, pepper spray, and water cannons against demonstrators, according to the tribe, and hundreds have been injured.

“The state has overreacted,” Prakash said. “You don’t need a militarized response to a peaceful protest. You don’t need cops in Humvees. It looks like a military operation. In any democratic society, the right to protest is a fundamental right.”

Many public officials, including Congressman Cramer and Cody Schulz, the Morton County Commission chairman, defend the force used by police, however. They say that some out-of-state protesters have instigated the violence, and they view the protest as an illegal occupation of federal land.

“Our law enforcement has exercised incredible restraint,” Rep. Cramer said. “We are living in a time where officers are executed at point-blank range on a regular basis. One thing about North Dakotans is we don’t confuse enforcing the law with breaking the law.”

What do you think of the assertions made by the protesters and these local officials? With whom do you agree? Explain your answers.

9. Also from The Daily Signal:

All parties agree that the Obama administration is running out of time to see through the end of the conflict. Yet local officials are waiting for help.

Requests for federal law enforcement assistance have been denied, he said, adding: “Absolutely this a federal issue. We are talking about a federal easement, this case has been heard in federal court, the protests are occurring on federal property, and the federal agencies are the ones that put the pipeline on hold. The federal government has failed miserably at addressing it.”

Considering this, do you think President Obama should have made a decision on the pipeline? Explain your answer.

10. What did Morton County’s Cody Schulz say that leads you to believe officials want to maintain a good relationship with the Standing Rock Sioux?

Note: Over the weekend, 2,000 U.S. military veterans headed to North Dakota to, they say, “protect the protesters”.  On Sunday the Army Corp of Engineers announced they will not immediately grant the Dakota Access Pipeline the right to cross the Missouri River next to the Standing Rock Sioux Reservation. (The Army Corps of Engineers is a U.S. federal agency under the Department of Defense. These agencies answer to the president.)