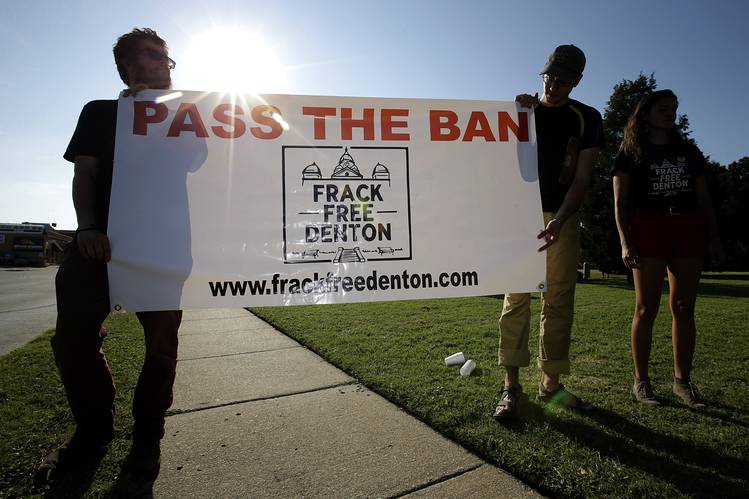 On Monday, Republican Gov. Greg Abbott signed a law that prohibits bans of hydraulic fracturing altogether and makes it much harder for municipal and county governments to control where oil and gas wells can be drilled. Similar efforts are cropping up in states including New Mexico, Ohio, Colorado and Oklahoma, where both chambers of the legislature have passed a bill that limits local governments to “reasonable” restrictions on oil and gas activities.

This is all part of a broader legislative and judicial effort, backed by the oil industry, to limit local governments’ ability to regulate drilling. Backers say that both the Oklahoma and Texas bills were proposed in response to a voter-approved ban on fracking in Denton, Texas, in November.

One of the authors of the Texas bill said his motivation was to protect an economically important industry. “Oil is a huge job driver for the state of Texas,” said state Sen. Troy Fraser, a Republican from the central part of the state.

The new law eliminates a “patchwork of local ordinances [law or regulation made by a city or town government] creating more and more regulation, some of which is intentionally onerous [having legal obligations that outweigh the advantages] and intended to stop or limit oil and gas development,” said Ed Longanecker, president of the Texas Independent Producers and Royalty Owners Association.

The law has angered officials in Denton, about 50 miles northwest of Dallas, where residents approved the first ban in the state. Officials there said they supported it only after failed efforts to resolve quality-of-life problems including a well explosion and noisy drilling near homes and schools.

“It’s a bad situation when city leaders’ hands are tied,” said Denton Councilman Kevin Roden. “There seems to be an attitude that big state government knows better than the citizens of a city. I just think – conservative or liberal – that is something you don’t do in Texas.”

Other critics of the bill said the balance of power between cities and the energy industry had been tilted toward drillers.

In the past decade, new technologies launched an energy boom in the U.S., sending oil and gas production soaring. But intense drilling and fracking activity triggered a backlash in some communities, which by zoning and ballot initiatives have tried to keep the drilling rigs either outside the city limits or far from housing. A natural gas-fueled drilling rig is shown earlier this year in Mentone, Texas. Texas, which has benefited from fracking, has tripled its production of oil in the past five years. (Photo: Spencer Platt/Getty Images)

Supporters of drilling say that local limits are driven by environmental ideology, not practical problems, and deprive landowners of their rights.

Across the country, the issue of the role of cities in deciding where drilling can occur “is still very much up in the air,” said Hannah Wiseman, a law professor at Florida State University. “There is plenty of work for legislators and lawyers.”

One of the few places where local governments have prevailed is Pennsylvania. Lawmakers attempted to rein in cities’ ability to limit oil and gas activity, but the state Supreme Court overturned that law in late 2013.

In Colorado, after voters in several cities approved fracking bans and were sued by industry groups, the governor convened a task force to find middle ground. The group wrapped up its work earlier this year but failed to resolve the thorny issue of the appropriate role for cities. …

2. What does the Texas law do? Be specific.

3. In what other states have similar efforts appeared?

4. For what reason did state senator Troy Fraser author the Texas bill?

5. Who opposes the Texas law? For what reasons do they oppose it?

6. What other actions are state governments taking to keep fracking legal?

7. Supporters of drilling say that local limits are driven by environmental ideology, not practical problems, and deprive landowners of their rights.
a) Do you think state law should override local ordinances in deciding this issue? Explain your answer.
b) How should local/state officials balance addressing homeowners’ complaints/concerns over noise/disturbance from fracking with other landowners rights to their land? Explain your answer.