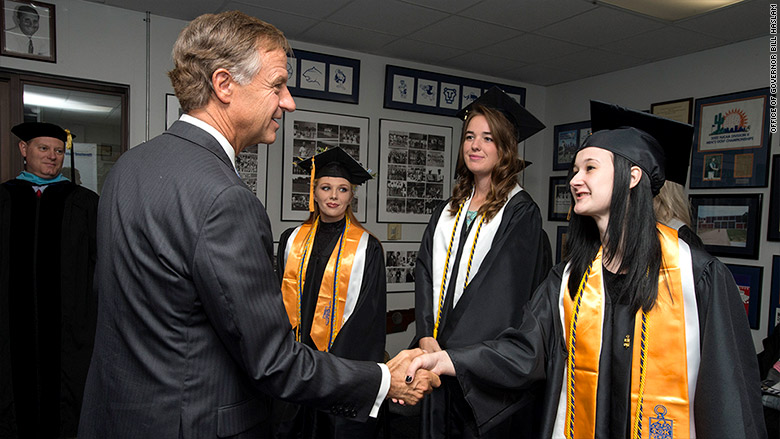 Governor Haslam congratulated some of the first Tennesseans to graduate community college tuition-free on May 6.

Please Note:  Daily posting and “Answers” emails will end for the school year on Friday, May 26th.

(by Katie Lobosco, CNN Money) – Lawmakers approved legislation Wednesday that will expand the Tennessee Promise program that launched in 2014. It made tuition and fees free for recent high school graduates enrolled in a community college or technical school. Now, adults who don’t already have an associate’s or bachelor’s degree can go for free, too, starting in the 2018 fall semester.

[Republican] Governor Bill Haslam is expected to sign the bill into law. He proposed the legislation in his State of the State address earlier this year. It’s a cornerstone of his initiative to increase the number of residents with a college education to 55% by 2025. Last year, less than 39% of residents had gone to college.

“If we want to have jobs ready for Tennesseans, we have to make sure that Tennesseans are ready for jobs, and there is no smarter investment than increasing access to high-quality education,” Haslam said in a statement.

To be eligible, students must have been a state resident for at least a year before applying, maintain a 2.0 GPA, enroll in enough classes to be a part-time student, and complete the Free Application for Federal Student Aid (FAFSA).

Expanding the free-tuition program will cost about $11.2 million once fully implemented. But it will be funded by the state’s lottery account, just like the rest of Tennessee Promise. [An estimated 20,000 are expected to enroll in the first year, said Mike Krause, executive director of the Tennessee Higher Education Commission.]

Students will save about $3,700 a year, which is the average cost of tuition and fees at Tennessee’s 13 community colleges. If they already receive a need-based Pell Grant from the federal government, Tennessee will cover any remaining cost. Should states be in the gambling business?

In April, New York made tuition free at two- and four-year colleges for students whose families earn no more than $125,000 a year. Lawmakers in Rhode Island are also considering a proposal to make two years of college tuition-free.

More than 33,000 students have benefited from the Tennessee Promise program in its first two years, raising enrollment among first-time freshmen by 30%, according to the governor’s office. The first group of eligible students are graduating this year.

CNNMoney (New York) First published May 11, 2017. Reprinted here for educational purposes only. May not be reproduced on other websites without permission from CNNMoney. For the original article, visit CNNMoney.com.

1. What is the Tennessee Promise program?

2. What did the Tennessee legislation passed by state lawmakers add to the Promise program?

3. Why did Republican Governor Bill Haslam propose the bill?

4. What is the purpose of the free college, according to Gov. Haslam?

5. What requirements must potential students fulfill to be eligible for the free tuition?

6. a) The cost of the free-tuition program is approximately $11.2 million per year. How will the state fund the program?
b) b) What do you think about this idea of the government running a state lottery gambling program and using part of it to fund the free college program?
c) Ask a parent to explain to you the irony of running a lottery to pay for 2 year college tuition.

Read about the Tennessee Promise program.

In lotteries, the poor are the biggest losers
(excerpted from a CNN report by David R. Just, Dec. 18, 2013)

… Most of those who play [the lottery] know they have little chance of winning anything. Ever. And most of them probably can’t afford to play, anyway.

Still, they line up to place their dollars on the counter, all for a snowball’s chance at an instant miracle, even as that miracle has gotten harder to attain.

Lotteries and games of chance such as the Mega Millions, or more traditional casinos, have come in vogue among politicians seeking to raise revenues without raising taxes.

This seems like a net win all around — players receive the entertainment of playing and we all enjoy the benefits of higher funding for schools or other public works.

Unfortunately the reality is not so rosy.

Those in poverty or near poverty not only are more likely to play the lottery than those with greater means, they also spend a larger percent of their money on average on these games of chance.

… there are big jumps in lottery purchases when the poverty rate increases, when unemployment increases, or when people enroll on welfare.

Lottery playing among the poor is a Hail Mary investment strategy — a small ray of hope.

But this false hope is, by design, an attempt to lure the emotional decision-maker. Recent changes in the Mega Millions lottery have reduced the chances of winning in order to increase the size of the jackpot.

By changing the range of the six possible numbers drawn — from between 1 and 56 to between 1 and 75 — the already improbable odds of 1 in 176 million have diminished to a virtually impossible 1 in 259 million. Fewer big winners means larger jackpots, more hype and more players.
And more money for the lotteries.

Such changes have occurred as the lottery commissions have become expert in swindling players out of their money. Humans aren’t particularly good at dealing with risks and gambles. We tend to believe that rare events are more common than they truly are.

Moreover, we don’t discern between small changes in very low probabilities. Thus, few will have noticed that the odds of winning the lottery reduced from 0.000000006 to 0.000000004 for any given ticket.

But our eyes are drawn to the steadily increasing prizes—prizes that are now designed to eventually exceed $1 billion. Such astronomical amounts draw in even those who consider themselves very prudent.

When the prizes get this large, many start to rationalize the purchase of a ticket. In the end, there are few who win money, and many who simply lose a few dollars with nothing to show for it.

But those few dollars add up.