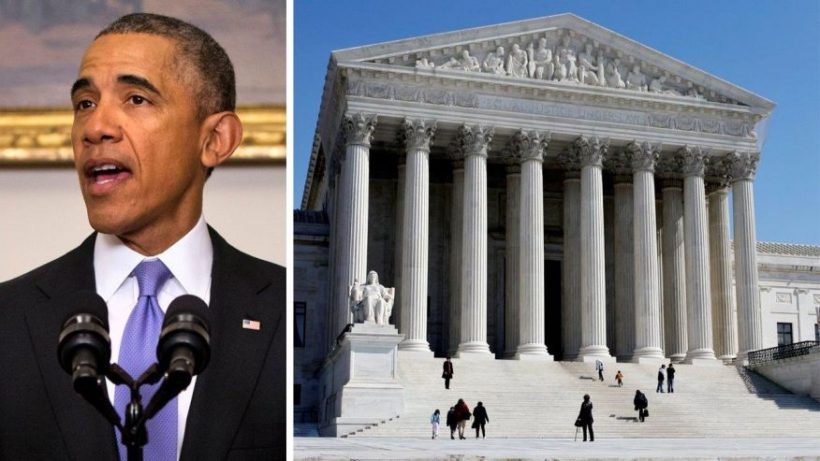 (CBS News) – The U.S. Supreme Court has agreed to review President Obama’s executive actions from 2014 that would block up to 5 million immigrants in the U.S. illegally from being deported.

The plan has been tied up in court since 26 states, mainly led by Republicans, challenged the legality of the plan. In February 2015, a federal judge temporarily blocked President Obama’s executive actions from taking place and said the states had standing to sue. He did not rule on the constitutionality of the plan.

The case will be argued in April and decided by late June, in the midst of a heated 2016 election where immigration remains a key issue. The decision will come about a month before the party delegates gather for their nominating conventions.

The administration makes three main arguments in its appeal: the states have no right to challenge the policy in federal court; the government followed appropriate procedure; and the administration has broad discretion in the area of immigration. …

The executive actions the president unveiled in 2014 would grant a reprieve from deportation to about 5 million immigrants in the U.S. illegally and allow them to apply for a three-year work permit if they can pass a background check, register with the government, submit biometric data, and establish they are eligible for relief.

President Obama did not sign any executive orders to carry out his plans, but rather issued several presidential memoranda that establish new procedures and guidelines for the Departments of Homeland Security, Justice and Labor.

Those who could receive a reprieve if the plan is upheld include the parents of children who were either born in the U.S. or are Lawful Permanent Residents, and children who were brought into the country illegally prior to January 1, 2010, and have lived in the U.S. for at least five years. The latter category represents an expansion of the Deferred Action for Childhood Arrivals program, known as DACA, which previously required applicants to have arrived before June 15, 2007 and had an age limit.

So far, the federal courts have sided with the states to keep the administration from issuing work permits and allowing those here illegally from beginning to receive some federal benefits.

The Obama administration said Texas and the other states don’t even have the right to challenge the plan in federal court. The lower courts decided that Texas does have the right, or standing, to sue because at least 500,000 people living in Texas would qualify for work permits and thus become eligible for driver licenses, the cost of which are subsidized by the state. “Texas would incur millions of dollars in costs,” the state said in its brief to the Supreme Court.

The justices also said they would consider whether Obama exceeded his authority under federal laws and the Constitution. …

If the justices eventually side with the president, that would leave roughly seven months in Obama’s presidency to implement his plans. …

2. Put the following events in the order in which they occur:

3. List the three arguments used by the Obama administration in its appeal to the Supreme Court.

4. What would President Obama’s 2014 executive actions on immigration actually do? (Who is included? Be specific.) See para. 6, 8

7. What other issue have the justices said they will consider when deciding the appeal?

The Supreme Court can overrule an order in the same way it would find a law unconstitutional.

In December 2014, Texas and 25 other states filed a lawsuit in the  Southern District Court of Texas seeking to block both DAPA and expanded DACA. The main grounds for their suit were the costs of issuing driver’s licenses and other associated costs of giving the undocumented immigrants legal status. Other issues being considered included exceeding executive power, failure to adhere to rulemaking procedures, and standing — the right of the states to challenge federal immigration policies. On February 16, 2015, Judge Andrew Hanen issued a temporary injunction blocking both programs from going into effect. (National Law Review)

CHALLENGE:   On Executive Orders (from wikipedia):

There is no constitutional provision nor statute that explicitly permits executive orders. The term executive power Article II, Section 1, Clause 1 of the Constitution, refers to the title of President as the executive. He is instructed therein by the declaration “take Care that the Laws be faithfully executed” made in Article II, Section 3, Clause 5 or face impeachment.

Most executive orders use these Constitutional reasonings as the authorization allowing for their issuance to be justified as part of the President’s sworn duties, the intent being to help direct officers of the U.S. Executive carry out their delegated duties as well as the normal operations of the federal government: the consequence of failing to comply possibly being the removal from office.

An executive order of the president must find support in the Constitution, either in a clause granting the president specific power, or by a delegation of power by Congress to the president.

Considering this, do you think President Obama has the Constitutional authority to bypass Congress to issue executive actions on immigration?  Explain your answer.