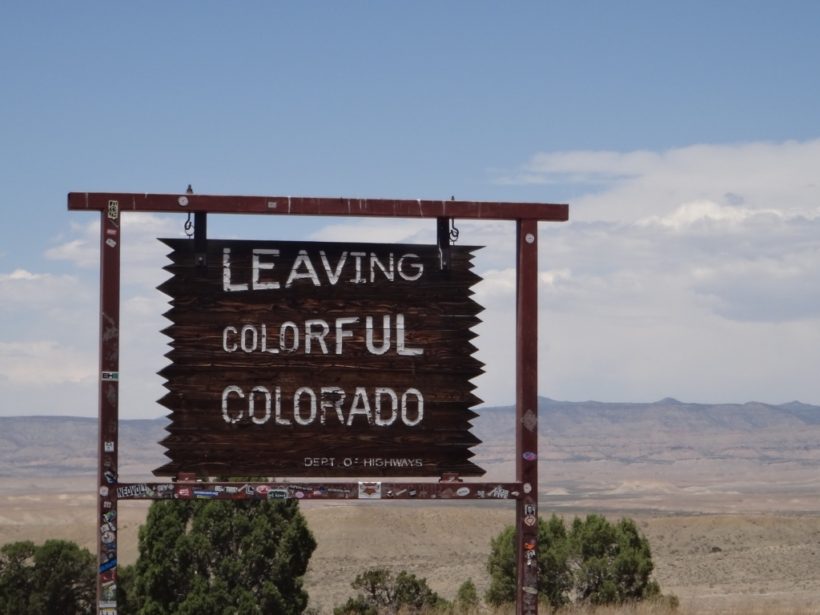 That’s pretty much the position of two states – Oklahoma and Nebraska – who are fed up with their pot-smoking neighbor Colorado.

The two states are asking the United States Supreme Court to take up their complaint that the legalization of marijuana in neighboring Colorado is causing irreparable harm in their own states, including significant interstate trafficking of marijuana grown, sold, and distributed legally in Colorado.

It is unclear whether the justices will agree to wade into the controversy. But there appears to be some interest in the case by the court. On Monday, the justices asked the U.S. solicitor general’s office to file a brief expressing its views on the issue.

The Obama administration’s position will be important because, until now, the Justice Department has looked the other way while states like Colorado, Oregon, Washington, and Alaska…decriminalized the recreational use of marijuana.

…Marijuana continues to be listed as a Schedule 1 narcotic under the federal Controlled Substances Act [CSA], carrying the most severe restrictions. Oklahoma and Nebraska want the federal government to faithfully enforce the law. …

[Using] prosecutorial discretion*, former Attorney General Eric Holder and his Justice Department colleagues have instructed prosecutors to focus their limited resources on other crimes [that he views] as more serious. [*The term “prosecutorial discretion” refers to the fact that under American law, government prosecuting attorneys have nearly absolute and unreviewable power to choose whether or not to bring criminal charges, and what charges to bring, in cases where the evidence would justify charges.]

“In passing and enforcing Amendment 64, the state of Colorado has created a dangerous gap in the federal drug control system enacted by the Unites States Congress,” Nebraska Assistant Attorney General Ryan Post wrote in his motion to the high court on behalf of both states.

“Marijuana flows from this gap into neighboring states, undermining Plaintiff  States’ own marijuana bans, draining their treasuries, and placing stress on their criminal justice systems,” the motion says.

In defending its decriminalization, Colorado says its legal regime is designed to channel demand away from a multibillion dollar black market and into a licensed and closely monitored retail system.

“No one contends that Colorado law trumps the federal marijuana ban or immunizes anyone from federal prosecution,” Colorado Solicitor General Frederick Yarger wrote in his brief.

“Instead, the question here is whether a state that chooses to legalize marijuana is then prohibited from regulating the market for it,” he said.

Colorado says that since the CSA [Controlled Substances Act] was enacted more than 40 years ago, virtually all marijuana enforcement in the U.S. has been at the state level. …

In his brief to the high court, Solicitor General Yarger said that Colorado’s approach to marijuana hinged substantially on signals from the Obama administration that it would not enforce marijuana laws in states seeking to decriminalize the drug.

In 2009, the Obama administration said in a Justice Department memo that although marijuana remains an illegal drug under the CSA federal law, federal investigative and prosecutorial resources should not be directed toward individuals seeking medical use of marijuana in states that have legalized such use.

Under Colorado’s 2012 voter initiative, anyone over 21 is authorized to possess, cultivate, and use specified amounts of marijuana. The measure also authorized the state to license and tax retail marijuana businesses.

In response, Attorney General Holder announced that the federal government would not challenge Colorado’s new law, or a similar measure in Washington State. …

Colorado says it is entitled to pursue its own marijuana regulations. “Plaintiff states’ quarrel is not with Colorado but with the federal government’s relaxed view of federal enforcement obligations under the law [CSA-Controlled Substances Act],” Yarger said. …

“A state does not invade the sovereign rights of another state, by making a policy decision that parts ways with its neighbors,” Yarger wrote. …

Oklahoma and Nebraska aren’t alone in their arguments.  All nine former administrators of the Drug Enforcement Administration [DEA] filed a friend of the court brief supporting Nebraska and Oklahoma. They charge that the executive branch has “willfully ignored Colorado’s violation of federal law.” …

Reprinted here for educational purposes only. May not be reproduced on other websites without permission from Christian Science Monitor. Visit the website at csmonitor .com.

1. What arguments are the states of Oklahoma and Nebraska using in their appeal to the U.S. Supreme Court over Colorado’s legalization of recreational marijuana? Be specific.

2. What do Oklahoma and Nebraska want the Supreme Court to do? Be specific.

4. How does Colorado defend its position?

5. What argument do all 9 of the former administrators of the DEA use in their friend of the court brief supporting Nebraska and Oklahoma?

Do you think Solicitor Yarger’s assertions are reasonable? Explain your answer.

Some 23 states, plus the District of Columbia, permit the use of medical marijuana. In recent years, Colorado and a handful of other states have gone even further.

ATTORNEY GENERAL: (from the Department of Justice  and wikipedia)

THE DEPARTMENT OF JUSTICE’S MISSION: (from the Department of Justice)

(and from about.com):  As the largest law firm in the Nation, the Department of Justice serves as counsel for its citizens. It represents them in enforcing the law in the public interest. Through its thousands of lawyers, investigators, and agents, the Department plays the key role in protection against criminals and subversion, in ensuring healthy competition of business in our free enterprise system, in safeguarding the consumer, and in enforcing drug, immigration, and naturalization laws.
Get Free Answers