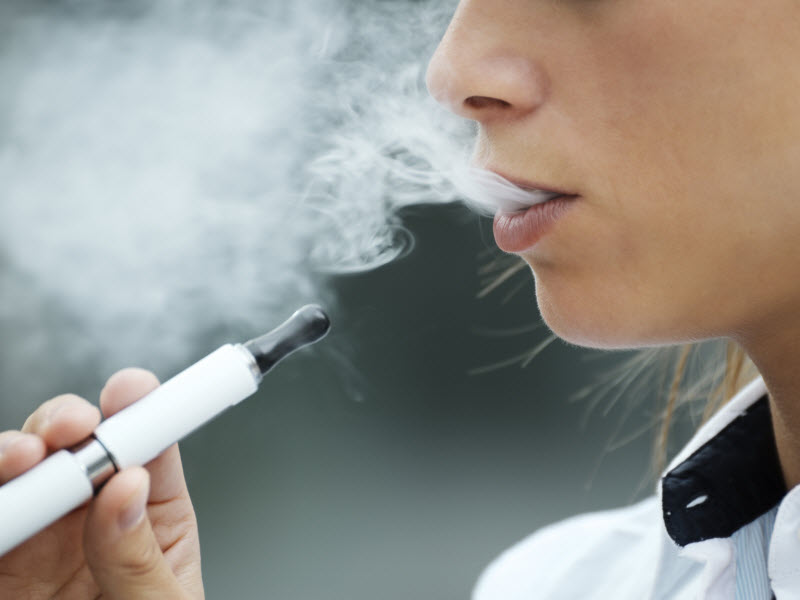 Electronic cigarette "vapors" are made of small particles containing chemicals.

(by M. Delatorre, KFOR.com) — E-cigarettes [are promoted] as a way to curb the addictive effects of nicotine in regular cigarettes…. But Harvard T.H. Chan School of Public Health has some bad news.

Diacetyl, a flavoring chemical used to make the smoke from your e-cig taste good, is linked to cases of severe respiratory disease. It was found in more than 75 percent of flavored electronic cigarettes and refill liquids tested by researchers at Harvard.

The study was published online in Environmental Health Perspectives on Tuesday, Dec. 8.

The Occupational Safety and Health Administration (OSHA)*, as well as the flavoring industry, has warned people against the use of diacetyl because of the link between inhaling the chemical and a disease called bronchiolitis obliterans, otherwise known as “popcorn lung.” [*OSHA is an agency of the U.S. Department of Labor. Its mission is to “assure safe and healthful working conditions for working men and women by setting and enforcing standards and by providing training, outreach, education and assistance.”]

“Recognition of the hazards associated with inhaling flavoring chemicals started with ‘popcorn lung’ over a decade ago. However, diacetyl and other related flavoring chemicals are used in many other flavors beyond butter-flavored popcorn, including fruit flavors, alcohol flavors, and, we learned in our study, candy-flavored e-cigarettes,” said lead author Joseph Allen, assistant professor of exposure assessment sciences.

There are more than 7,000 flavored e-cigarettes and e-juices (nicotine-containing liquid that is used in refillable devices) on the market.

While the popularity of electronic cigarettes continues to increase, there is a “lack of data on their potential health effects,” according to Amy Roeder, with Harvard Chan School Communications.

E-cigs are not currently regulated by the FDA, although the association has recommended including e-cigarettes under their authority to regulate certain tobacco and nicotine-containing products.

In testing 51 leading types of flavored e-cigs and liquids, researchers found varying levels of diacetyl, as well as two other highly hazardous chemicals, acetoin and 2,3-pentanedione.

The Flavor and Extract Manufacturers Association lists the two latter chemicals as “high priority,” i.e., they may pose a respiratory hazard in the workplace.

In conducting the study, Roeder says, “Each e-cigarette was inserted into a sealed chamber attached to a lab-built device that drew air through the e-cigarette for eight seconds at a time with a resting period of 15 or 30 second between each draw. The air stream was then analyzed.”

“Since most of the health concerns about e-cigarettes have focused on nicotine, there is still much we do not know about e-cigarettes. In addition to containing varying levels of the addictive substance nicotine, they also contain other cancer-causing chemicals, such as formaldehyde, and as our study shows, flavoring chemicals that can cause lung damage,” said study co-author David Christiani, Elkan Blout Professor of Environmental Genetics.

Reprinted here for educational purposes only. May not be reproduced on other websites without permission from KFOR .com.

1. a) What is diacetyl?
b) What harm does it cause to humans?

2. a) What is OSHA?
b) Why has OSHA warned people against the use of diacetyl?

3. a) How many flavors of e-cigarettes and e-juices are currently on the market?
b) How many flavored e-cigs and liquids did the Harvard researchers test for their study?

4. What did researchers discover about the prevalence of diacetyl in flavored e-cigs and refill liquids?

5. a) In addition to diacetyl, what else did researchers discover during their testing?
b) How are acetoin and 2,3-pentanedione described by the Flavor and Extract Manufacturers Association?

6. Do you think information like this will cause teens stop using e-cigarettes and/or choose not to even start? Explain your answer.

More on the study from a CBS News report:

Pulmonary specialist Dr. David Beuther said, “The presence of that chemical [diacetyl] is concerning enough for me to be stronger with my patients when we’re talking about the unknown safety hazards of e-cigarettes.”

“Bronchiolitis obliterans is irreversible. You can’t take it back,” said Beuther, an associate professor of medicine at National Jewish Health, one of the country’s top respiratory hospitals. He said the disease leads to the need for a lung transplant.

Acetoin is also linked with “popcorn lung,” according to the study.

The chemical 2,3 pentanedione has caused lung and brain damage in rats, according to the National Institute for Occupational Safety and Health.

Some e-cigarette users believe the products help them transition away from smoking regular cigarettes, but other studies have suggested they might provide a gateway to smoking for others.

Dr. Beuther told CBS News he’s particularly concerned about teens and young adults using e-cigarettes. He says that lungs are not fully developed until about age 25 and that vaping could lead to silent damage. Also, smaller people, and perhaps some women, may be exposed to a higher concentration of a given material compared to a larger man, for example, he said.

According to the CDC, there are an estimated 2.5 million teen e-cigarette users. Use among both high school and middle school students tripled in one year. Youth use of e-cigarettes has also now surpassed youth cigarette smoking.