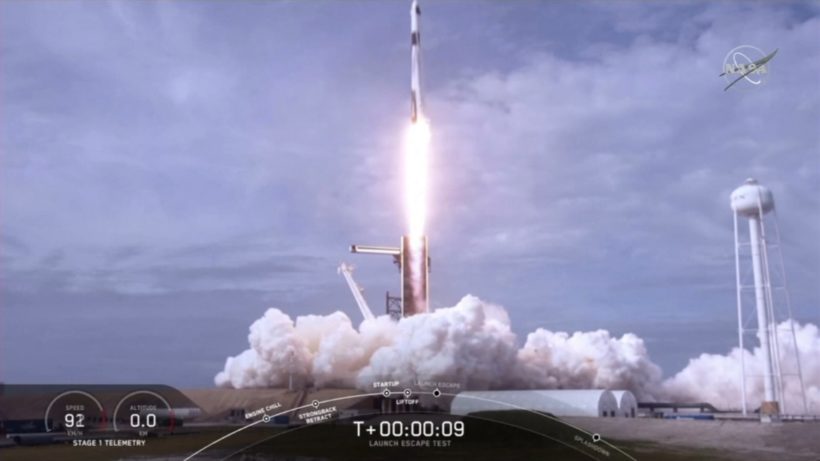 SpaceX launched, then destroyed rocket in an escape test ahead of first mission

(by Associated Press, Jan.20) – SpaceX completed the last big test of its crew capsule before it launches astronauts in the next few months, mimicking an emergency escape shortly after lift-off Sunday.

No one was aboard for the [test] above Cape Canaveral, just two mannequins.

The nine-minute flight ended with the Crew Dragon capsule parachuting safely into the Atlantic, after separating and speeding away from the exploding rocket.

The capsule reached an altitude of about 27 miles before parachuting into the ocean just offshore to bring the test flight to a close. By all early accounts, the test was successful.

“I’m super fired up,” Elon Musk, the company’s founder and chief executive, told reporters. “It’s just going to be wonderful to get astronauts back into orbit from American soil after almost a decade of not being able to do so. That’s just super exciting.”

NASA astronauts have not launched from the US since [President Obama ended the] space shuttle program in 2011. Musk and NASA administrator Jim Bridenstine said the next Crew Dragon could launch with a pair of NASA astronauts (Doug Hurley and Robert Behnken) as early as April. …

The astronauts monitored Sunday’s flight from the firing room. Hurley said it was “pretty neat to see” the capsule aboard the recovery ship within two hours.

“We’ll see what the data show and go from there,” Hurley said. “But it certainly is a confidence builder from the standpoint if you ever got into that situation, that Dragon can get us away from the booster quickly.”

[There’s still some work to do before SpaceX can be cleared to launch Demo-2 with astronauts Behnken and Hurley, … Bridenstine and others stressed.

The Crew Dragon capsule and Falcon 9 rocket that will fly Demo-2 should be ready to go by the end of February, SpaceX’s Musk said. The company will check and double-check all the necessary systems, and mapping out the schedule for an ISS mission will also take some time, he added.

Taking all this into consideration, Demo-2 is likely to get off the ground sometime this spring, Musk said, stressing that this is the consensus view of the NASA and SpaceX teams]. Their launch date will depend, in part, on whether Nasa decides to keep them for months at the orbiting lab, versus just a week or two.

From Associated Press, published by the UK Daily Telegraph .com on Jan. 20, 2020. Reprinted here for educational purposes only. May not be reproduced on other websites without permission from Thompson Reuters.

2. What was the outcome of the test?

3. When is the last time NASA astronauts have launched from the U.S.?

4. What additional steps need to be taken before SpaceX will be cleared to launch Demo-2 with the two astronauts aboard?

5. When is the actual launch expected to happen?

6. How significant do you think the success of the SpaceX commercial launch will be?

Watch the Jan. 19 SpaceX test of the emergency escape: 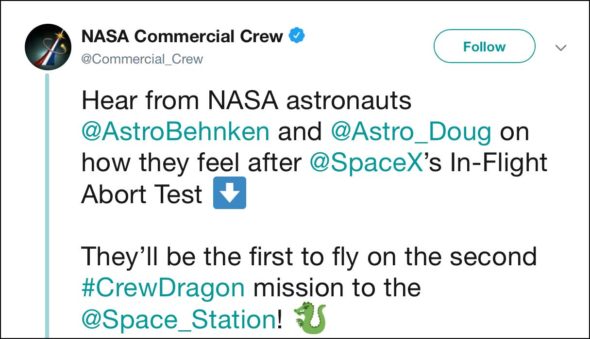