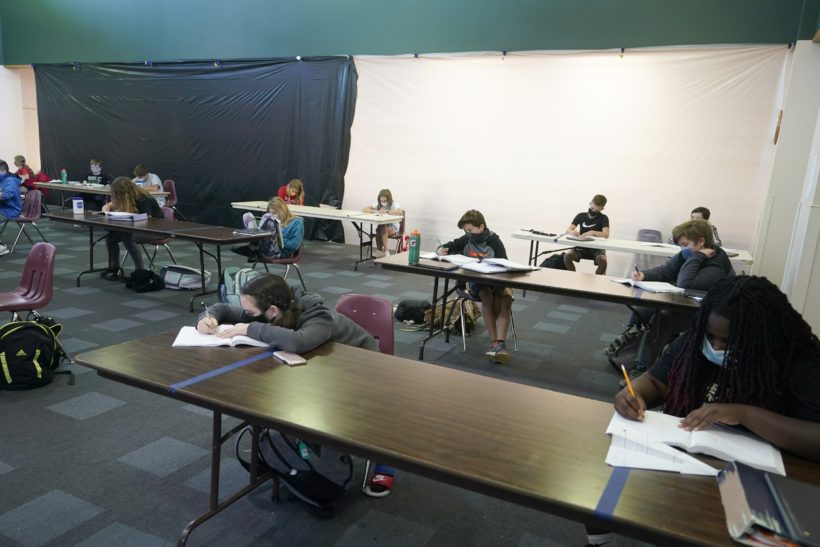 (by Associated Press at ABCNews) MISSION, Kan. — In ordinary times, the airy convention center on a 61-acre site in Hesston, Kansas, hosts weddings, corporate retreats and church events. During the pandemic, it has become a schoolhouse for the district’s seventh- and eighth-graders.

Megan Kohlman teaches literature and writing inside one of the rooms, separated from a math teacher’s space by only a plastic sheet. It’s hardly ideal, but for her it’s an upgrade from distance learning in the spring, when she juggled instruction with care of her own young children.

“Everyone just really believes in the power of having kids with us as much as we can,” Kohlman said.

Some schools are getting creative about finding extra square footage to facilitate social distancing and reduce the health risks associated with in-person learning. Districts are setting up makeshift outdoor shelters, bringing in trailers to house classrooms and making use of otherwise empty spaces like museums. As infection rates rise across the county with the arrival of colder weather, some education leaders say they wish such approaches were taken more widely.

School systems could take cues from the health care system, which has found ways to increase capacity when coronavirus cases surge, said Joseph Allen, …an associate professor …who runs Harvard’s Healthy Buildings Program. He said the costs of keeping kids out of school are “devastating.”

“With schools, we seem to be stuck in this closed mindset where it is only in schools or in the existing setup or it is not going to happen,” Allen said. 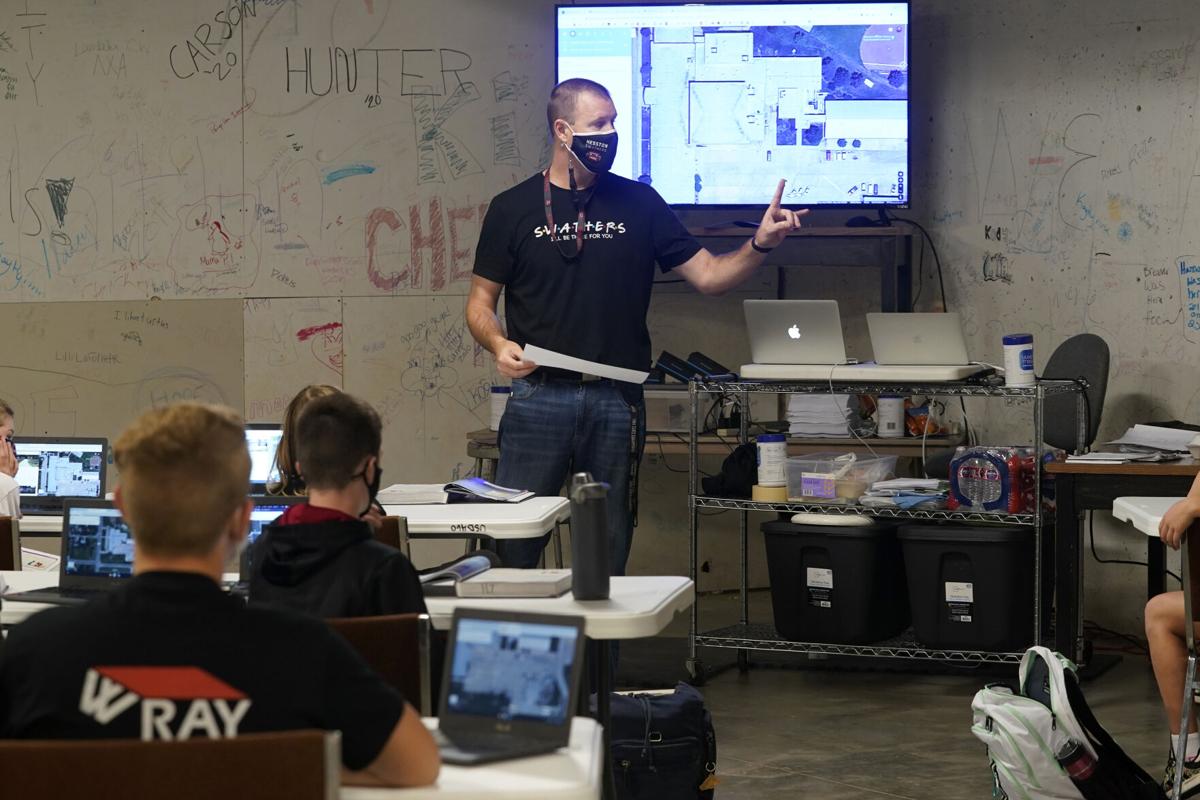 Matt Richardson teaches his students from Hesston Middle School in the basement of the Cross Winds Convention Center in Hesston, Kansas, Friday, Nov. 6, 2020.

Kansas Education Commissioner Randy Watson is holding up the Hesston district’s plan as a model to be replicated. He said his visits to dozens of school districts revealed many were struggling regardless of whether they were offering in-person, virtual or hybrid instruction. In nearly every district, officials told him the models they were using were unsustainable because of the stress on everyone involved. …

He also is promoting the efforts in Topeka schools, where office space and music rooms have been transformed into classrooms and some central office staff turned into teachers to keep classes small.

In Hesston, seventh- and eighth-graders started the fall semester at the Cross Wind Conference Center, which had been sitting unused amid the pandemic. That created room for the fifth- and sixth-graders to spread out in the middle school, including in the gymnasium and choir room. The seventh- and eighth-graders returned to the middle school for two weeks when coronavirus numbers temporarily improved, but then returned to the conference center as the numbers [increased]. …

If the coronavirus numbers continue to rise in the community, second- and fourth-graders will be moved from their [regular] classrooms into churches.

In a district with only 820 students, Hesston Superintendent Ben Proctor acknowledges logistical challenges are not what they could be for a larger school system.  …..

Samantha Keppler, assistant professor at the University of Michigan’s business school, wrote in the spring that schools could harness the power of relationships with churches and other community organizations to add space to make school reopening safer. She said it hasn’t happened as frequently as she had hoped.

“I think it is surprising where in big cities where the YMCA is literally across the street and they have a relationship and are running their afterschool program that they haven’t used this,” she said.

From Associated Press, published at abcnews .com.  Reprinted here for educational purposes only. May not be reproduced on other websites without permission from ABCNews and the AP.

1. a) List ways schools are getting creative about keeping students in the classroom while dealing with coronavirus.
b) How is Hesston, Kansas using the city’s convention center? Be specific.

2. How does Harvard’s Healthy Buildings Program professor view keeping students in the classroom during coronavirus?

4. What have officials in every district he visited told Kansas Education Commissioner Randy Watson about the models they use to teach during coronavirus?

5. a) What have Topeka, Kansas school officials done to address the problems with virtual learning?
b) What do you think of Superintendent Tiffany Anderson’s view?

6. What did University of Michigan’s assistant professor Samantha Keppler say about schools in big cities?

7. Others say it’s too hard in big cities, it won’t work in cities, etc. But many have warned of the “devastating” effect of keeping students out of schools. What do you think? — Is it too difficult for school districts to come up with a workable plan?
Administrators are surrounded by the most creative and ingenious people: teachers. Should they solicit ideas from teachers for “thinking outside the box?” Are the challenges of dealing with coronavirus too insurmountable? Explain your answers.

More from the Associated Press article above:

In New York City, Council Member Ben Kallos pushed for unused commercial space to be repurposed as classrooms, along with libraries and senior centers. But the idea faltered amid concerns about codes, costs and logistics.

“New York City had a blight of empty storefronts before the pandemic, which has only gotten worse and it seems only natural that the city could have activated each and every one of these spaces to serve our children in this time of need. It is disappointing and frankly irresponsible that the city didn’t do it,” Kallos said.

However, some 1,100 New York City schools have been approved to spend part of their day outdoors [now that it’s getting cold]. The city’s schools have sufficient indoor space for social distancing but are also using “alternative space” like holding classes in parks or closed streets, said NYC Department of Education spokesperson Katie O’Hanlon. [No word on how this will work out as freezing temperatures approach. Many question how this would work in a cold climate – and why this wasn’t set up during the 5 months schools were closed so classes could have resumed in person at the beginning of September when the weather was warmer].

Nationwide, dozens of school systems have shifted instruction outdoors or are making plans to do so, said Sharon Danks, CEO of Green Schoolyards America, a Berkeley, California, nonprofit that advocates for outdoor education. [Berkeley gets no snow and the average daily high in January is 55 degrees.

In New Orleans, the Louisiana Children’s Museum has been repurposed as a classroom for about 60 charter school students since it was forced to close earlier this year because of the coronavirus. Preschoolers and kindergartners from Langston Hughes Academy can spread out among the indoor exhibits, including a nearly $1 million water table that allows them to get their hands wet as they explore replicas of the locks and dams in the Mississippi River. Outside there are gardens to wander through and trees to climb.

“If this building were empty day in and day out, it would just be depressing,” museum CEO Julia Bland said. “The teachers have been totally engaged by this. They say they have never been so excited about going to work.”