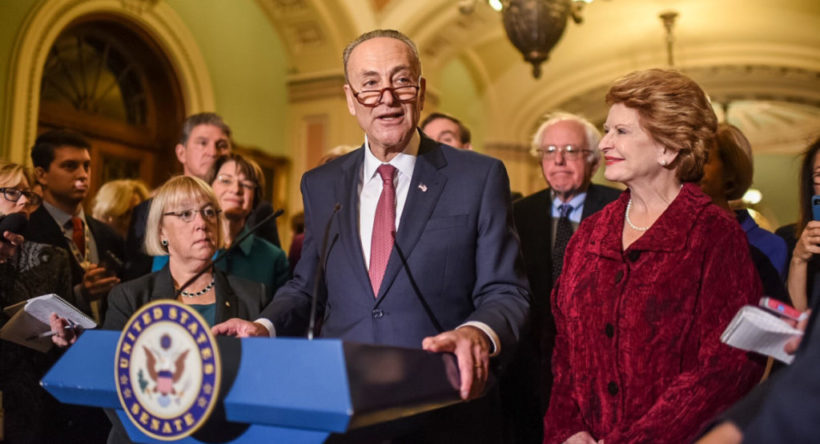 (by Caleb Parke and Gregg Re, Fox News) – Senate Democrats on Monday blocked a Republican bill that would have threatened prison time for doctors who don’t try saving the life of infants born alive during failed abortions….

All…Democratic 2020 presidential hopefuls in the Senate voted down the measure, including Bernie Sanders of Vermont, Kamala Harris of California, Cory Booker of New Jersey, Kirsten Gillibrand of New York, Amy Klobuchar of Minnesota and Elizabeth Warren of Massachusetts. The final vote was 53-44…- seven votes short of the 60 needed.

Three Democrats joined Republicans to support the bill — Joe Manchin of West Virginia, Bob Casey of Pennsylvania and Doug Jones or Alabama. Three Republicans did not vote, apparently because of scheduling issues and plane flight delays — including Kevin Cramer of North Dakota, Lisa Murkowski of Alaska and Tim Scott of South Carolina.

The Born-Alive Abortion Survivors Protection Act would have required that “any health care practitioner present” at the time of a birth “exercise the same degree of professional skill, care, and diligence to preserve the life and health of the child as a reasonably diligent and conscientious health care practitioner would render to any other child born alive at the same gestational age.”

The bill, which exempted the mother involved in the birth from prosecution, also would have required practitioners to “ensure that the child born alive is immediately transported and admitted to a hospital.”  Doctors who violate those requirements and other medical staffers who don’t report violations could face fines and up to five years in prison. Doctors who intentionally kill a child born alive after an abortion would face prosecution under federal murder statutes — potentially a death penalty or life in prison.

“Senate Democrats just voted against legislation to prevent the killing of newborn infant children.  The Democrat position on abortion is now so extreme that they don’t mind executing babies AFTER birth.  This will be remembered as one of the most shocking votes in the history of Congress. If there is one thing we should all agree on, it’s protecting the lives of innocent babies.”

Other Republicans were also incredulous. “I want to ask each and every one of my colleagues whether or not we’re OK with infanticide,” said the measure’s chief sponsor, Republican Sen. Ben Sasse of Nebraska.

…Sasse said he was surprised at each vote against the bill, and charged that opponents had lied “constantly” with “blatant nonsense” about the legislation — specifically, by claiming the bill would end abortion entirely.

“This is about the most simple thing you can say, which is that a baby is a baby, and they have dignity and worth,” Sasse said. “And it’s not because they’re powerful. It’s because they’re babies. Today is a sad day in the United States Senate.” …

Opponents, noting the rarity of such births and citing laws already making it a crime to kill newborn babies, said the bill was unnecessary. They claimed it was part of a push by abortion opponents to curb access to the procedure and intimidate doctors who perform it, and said late-term abortions generally occur when the infant is considered incapable of surviving after birth.

“This bill is just another line of attack in the ongoing war on women’s health,” New Hampshire Democratic Sen. Jeanne Shaheen said on the Senate floor.

Sasse’s bill would have faced an uphill battle in the House, where Democrats hold the majority.

A similar 2002 bill, called the Born-Alive Infants Protection Act, (see “Background” below) was passed unanimously by the Senate and signed by then-President George W. Bush.

Sasse attempted to pass the new bill by unanimous consent earlier this month but was blocked. Unanimous consent requires all 100 senators to agree, and Sen. Patty Murray, D-Wash., objected to Sasse’s bill, saying the legislation was unnecessary and amounted to a political stunt.

The legislation was introduced after Virginia Gov. Ralph Northam, a Democrat, endorsed post-birth abortions [infanticide] while discussing The Repeal Act, a state bill which sought to repeal restrictions on third-trimester abortions. Virginia Democratic Del. Kathy Tran, a sponsor of that bill, was asked at a hearing if a woman about to give birth and dilating could still request an abortion.

“My bill would allow that, yes,” Tran said. Northam, in a later interview with a radio station, backed up Tran.

[Also in the news this week, a Bronx man was sentenced to two years in prison for kicking a small dog in the air and into a brick wall, causing the dog to lose an eye.]

Fox News’ Martha MacCallum, Alex Pappas and The Associated Press contributed to this report. Reprinted here for educational purposes only. May not be reproduced on other websites without permission from FoxNews.

3. a) List the three Democratic senators who voted for the bill.
b) For what reason do you think they did so?

4. What did President Trump tweet about the defeat of the Born-Alive Abortion Survivors Protection Act?

5. How did Democratic opponents explain their reasons for voting against the bill?

7. Democrats accuse Republicans of pushing for the bill as a political stunt – presumably because they knew it would not pass the Senate or the House.
a) Some opponents argue that botched abortions rarely occur. But they do happen. Whatever your party or politics (liberal, conservative, libertarian…), do you think the Senate should have passed this bill unanimously? Explain your answer.
b) How important do you think it is for voters to know how their members of Congress vote on this bill? Explain your answer.

NOTE TO STUDENTS: We hope that you will seriously think about this issue and what type of country you want this to be. God made us in His image. Life is hard but there is hope whatever the circumstances. We encourage you to read God’s word for yourself and seek after His truth.

Under the current federal Born-Alive Infants Protection Act, signed into law in 2002, babies who survive abortions are recognized as “human beings,” “persons,” “individuals,” and “children” with all the rights those terms entail, but specific treatment for them isn’t mandated.

The Born-Alive Abortion Survivors Protection Act would supplement the existing law by specifically requiring abortionists to get such babies to hospitals.  Originally introduced in 2015, the legislation was brought back this year in response to an interview in which Virginia Democrat Gov. Ralph Northam defended the prospect of letting a disabled or “non-viable” infant die after a failed abortion attempt, for which he later said he had no regrets.

So far, Democrats have blocked six attempts in the U.S. House and Senate to pass the bill by unanimous consent, under which a bill automatically passes if no senator objects. (from LifeSiteNews, Feb. 25)