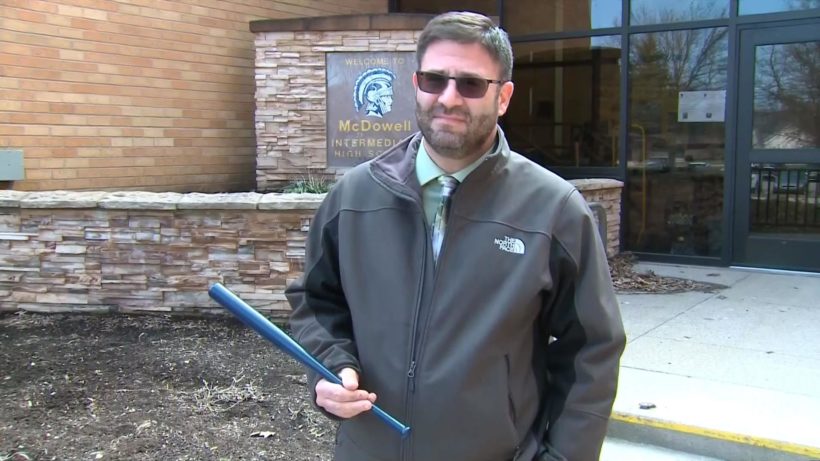 (by Jamison Hixenbaugh, Erie News Now) – In the wake of the school shooting in Parkland, Florida, the Millcreek School District is arming its 500 teachers with baseball bats.

“It is the last resort,” said Millcreek School District Superintendent William Hall.  “But, it is an option and something we want people to be aware of.”

According to Hall, the 16-inch bats were distributed to each teacher, following an in-service training day on how to respond to school shootings.

“We passed them out, with the goal being we wanted every room to have one of these,” said Hall.  “Unfortunately, we’re in a day and age where one might need to use them to protect ourselves and our kids.”

Hall says the bats are primarily “symbolic,” but they are now an option for teachers to use, should they need to fight back in a school shooting.

[“It’s not about just hiding and waiting,” he said. “There are options, and one of those is to fight.”]

Jon Cacchione, president of the Millcreek Education Association [the local teachers union] says he supports the decision to arm teachers with bats, which will be locked up in each classroom.

“This is a tool to have in the event we have nothing else,” said Cacchione.  “Part of the formula now, is to fight back, and so I think the bats that were provided for the staff were symbolic of that.”  [The bats are] “to make people comfortable with the idea that they can attack and not simply go into hard lockdown and just hide, as we’d been told in our training up to this point.”

Hall says it’s just one of several initiatives in the works to ensure student safety, including a concrete barrier around the high school walkway, and additional security measures at each entrance.

The district also conducted an on-line survey to see if the public supports the idea of arming select staff members with guns, if it becomes legal in Pennsylvania. [It is currently illegal in Pennsylvania to possess a weapon on school grounds, but legislators are proposing changes that could give school districts the option to decide for themselves about arming staff.]

“We thought just putting that one question out there would give us an idea how the community felt,” said Hall.  “It was about 70 percent to 30 percent that people would favor that, but we’re not really actively planning that right now.”

Hall says it cost the district about $1,800 to purchase the bats.

[The private Alice Institute in Medina, Ohio, teaches Alert, Lockdown, Inform, Counter and Evacuate (ALICE) skills to survive a shooting. To counter, or fight, an attack, the institute encourages potential victims to throw books, chairs and anything else at hand at a shooter that they can’t escape or hide from.

In addition to Millcreek’s plan, the Blue Mountain School District in Schuylkill County, Pennsylvania last month provided classrooms with five gallon buckets of river rocks to throw at a gunman. Superintendent David Helsel said that the stones were placed in classrooms throughout the sprawling, rural district so students would have something to throw at an attacker who breached doors that should be locked during such an emergency. But Helsel has repeatedly stressed that the stones are a “last resort.”

All Blue Mountain Schools are equipped with intercom and emergency phone systems, walkie-talkies, surveillance equipment and other security equipment, Helsel said. All classroom doors have been equipped with locking mechanisms. Blue Mountain has also held training scenarios and drills for students and staff. The district’s emergency security guidelines for intruders are also based on ALICE guidelines.]

1. For what reason has Pennsylvania’s Millcreek School District distributed 16 inch bats to teachers in every district classroom?

2. How does the superintendent view the bats?

3. How does local teachers union president Jon Cacchione explain the usefulness of the bats?

4. What other safety measures has the Millcreek District taken?

5. a) Why did the district conduct a community survey on the possibility of arming select staff members, should the Pennsylvania make that a legal option?
b) What were the results of the survey?

6. In what creative way did another Pennsylvania school district (Blue Mountain Schools) equip their classrooms?