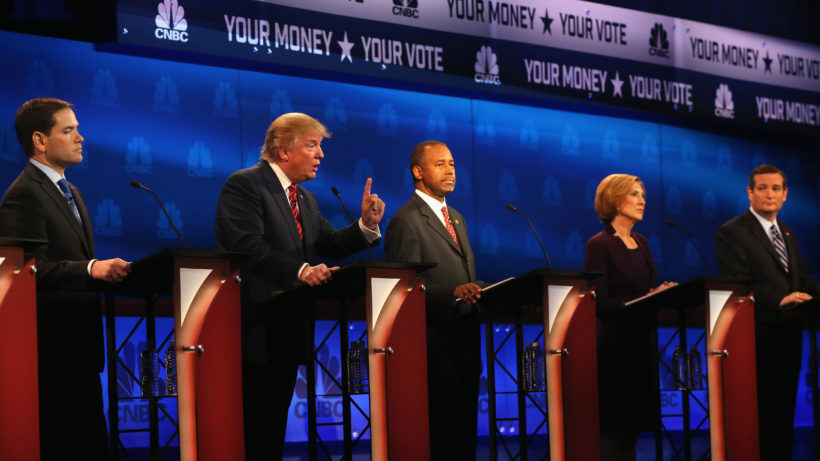 Candidates appear at the third GOP debate last week in Boulder, Colo. There were many complaints about CNBC’s handling of the event, saying the questions from CNBC’s liberal moderators were biased and insulting.

(Arnie Seipel and Domenico Montanaro, NPR) — At a private meeting Sunday night, representatives from most of the Republican presidential campaigns agreed to negotiate directly with broadcasters who are sponsoring debates, pushing the Republican National Committee (RNC) out of that role.

[This was the first year that the RNC had tried coordinating the debates, a job that historically had been handled by campaign staff. On Sunday, the campaign representatives agreed to remove the RNC as the middleman negotiating on their behalf with the networks] .

“We’re going to negotiate directly with the [debate] sponsors about format,” said Barry Bennett, campaign manager for retired neurosurgeon Ben Carson, after the meeting ended in Alexandria, Va., just outside Washington. “The way it’s always been done,” he added, referring to the fact that the RNC claimed a central role this year, trying to avoid a repeat of the debate process in 2012, which was seen as unruly and ultimately damaging to the eventual GOP nominee, Mitt Romney.

But Bennett insisted the traditional party power structure will not be cut out completely. “They’re a partner,” he said. “They’re just not our boss.”

Instead of allowing the RNC to negotiate directly with broadcasters, Bennett said the campaigns will hold a group conference call with the broadcast sponsor before each debate to review the format. They will work with the debate broadcasters already sanctioned* by the RNC. [*sanctioned: given official approval]

“They are the sanctioning body,” Bennett said, “but the format [of the debate] is for us to negotiate.”

[The candidates and their campaign staff have been frustrated over the lack of time to prepare for the debates, often learning about the format, such as time limits on responses to questions, just days in advance of the event.]

Bennett mentioned three elements of the format where the campaigns would have specific requirements:

1. Opening and closing statements for each candidate

2. Editorial control over biographical information displayed in graphics on screen

3. Equal numbers of questions for each candidate

Campaigns are also interested in discussing who will moderate debates and the types of questions that will be asked. There was some talk in the room of letting non-journalists moderate, like talk-radio hosts. It’s unclear how serious that was. It’s also been made clear that debates should not exceed two hours.

Bennett said the campaigns will decide on an individual basis whether to participate in any given debate. No other representatives from the campaigns spoke at length to reporters, but a top official from another campaign, who was negotiating in the room, confirmed many of the details to NPR.

Just before the meeting, the Republican National Committee named a new point person to oversee debates, an RNC official confirmed to NPR. Bennett called the move “a positive step.”

A letter, to be signed by the campaigns, will be circulated in the next 48 hours to the broadcast sponsors of the remaining Republican debates. But there are still plenty of details to be worked out – and some disagreements over which media outlets should be involved and not.

After the CNBC debate Wednesday, the RNC suspended its Feb. 26 debate with NBC. Both networks are owned by NBC Universal. [Republican presidential candidates were angered last week over CNBC’s handling of the third primary debate, saying the questions were biased and insulting. During the debate, Texas Sen. Ted Cruz accused the moderators of being part of the “liberal media,” a denunciation echoed later in the session by Florida Sen. Marco Rubio.]

The NBC debate was to be co-hosted by conservative magazine National Review and Telemundo, the liberal Spanish-language network. It would have been the only debate on the Republican side with a Spanish-language sponsor.

That was a flashpoint during Sunday night’s campaign conversations. The Bush campaign was pushing to bring Telemundo back into the fold as a media partner, but the Trump campaign was opposed.

Note: This article was first published at NPR on Nov. 1.  Excerpted here for educational purposes only. May not be reproduced on other websites without permission from NPR. Visit the website at NPR .org.

2. How did Dr. Ben Carson’s campaign manager describe the RNC’s role in the debates going forward?

3. Why are the Republican presidential candidates taking control of establishing new ground rules with the broadcasters sponsoring the debates?

4. How will the campaigns review the debate format with each media sponsor going forward?