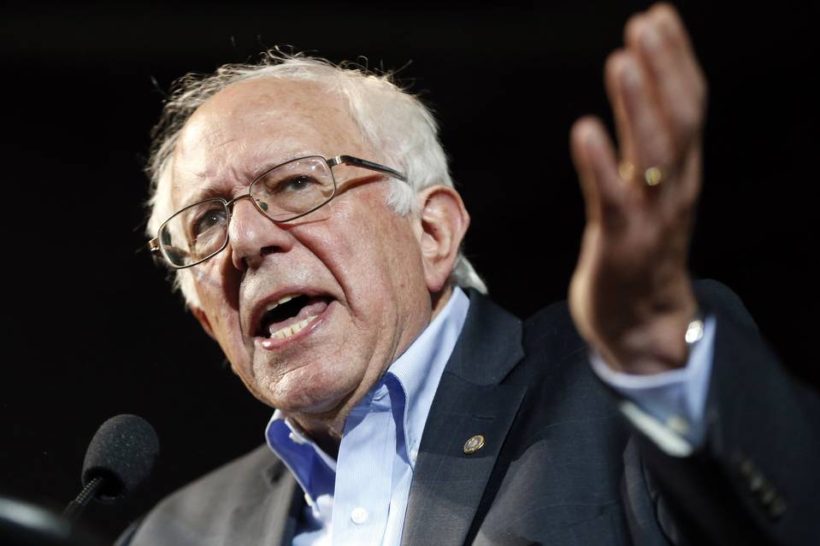 (by Laura Meckler, The Wall Street Journal) — [Democratic presidential candidate] Sen. Bernie Sanders, a self-professed “democratic socialist” whose liberal call to action has propelled his long-shot presidential campaign, is proposing an array of new programs that would amount to the largest peacetime expansion of government in modern American history.

In all, he backs at least $18 trillion in new spending over a decade, according to a tally by The Wall Street Journal, a sum that alarms conservatives and gives even many Democrats pause. Mr. Sanders sees the money as going to essential government services at a time of increasing strain on the middle class.

His agenda includes an estimated $15 trillion for a government-run health-care program that covers every American, plus large sums to rebuild roads and bridges, expand Social Security and make tuition free at public colleges.

To pay for it, Mr. Sanders, has so far detailed tax increases that could bring in as much as $6.5 trillion over 10 years, according to his staff.

A campaign aide said additional tax proposals would be offered to offset the cost of some, and possibly all, of his health program. A Democratic proposal for such a “single-payer” health plan, now in Congress, would be funded in part through a new payroll tax on employers and workers, with the trade-off being that employers would no longer have to pay for or arrange their workers’ insurance.

Mr. Sanders declined a request for an interview. His campaign referred questions to Warren Gunnels, his policy director, who said the programs would address an array of problems. “Sen. Sanders’s agenda does cost money,” he said. “If you look at the problems that are out there, it’s very reasonable.”

Calling himself a democratic socialist, Mr. Sanders has long stood to the left of the Democratic Party, and at first he was dismissed as little more than a liberal gadfly to the party’s front-runner, Hillary Clinton. But he is ahead of or tied with the former secretary of state in the early-voting states of Iowa and New Hampshire, and he has gained in national polling. He stands as her most serious challenger for the Democratic nomination.

Mr. Sanders has filled arenas with thousands of supporters, where he thunders an unabashedly liberal agenda to tackle what he says is pervasive economic inequality through more government services, higher taxes on the wealthy and new constraints on banks and corporations.

“One of the demands of my campaign is that we think big and not small,” he said in a recent speech to the Democratic National Committee.

Enacting his program would be difficult, if not impossible, given that Republican control of the House appears secure for the foreseeable future. Some of his program would be too liberal for even some centrist Democrats. Still, his agenda articulates the goals of many liberals and is exerting a leftward pressure on the party’s 2016 field.

The Sanders program amounts to increasing total federal spending by about one-third—to a projected $68 trillion or so over 10 years.

For many years, government spending has equaled about 20% of gross domestic product annually; his proposals would increase that to about 30% in their first year. As a share of the economy, that would represent a bigger increase in government spending than the New Deal or Great Society and is surpassed in modern history only by the World War II military buildup. …

He proposes $1 trillion to repair roads, bridges and airports. His college-affordability program would cost $750 billion over a decade. Smaller programs would provide youth jobs and prevent cuts to private pension plans. He would raise an additional $1.2 trillion in Social Security [payroll] taxes in order to increase benefits and pay those already promised for 50 years. That would bolster the program but fall short of the 75 years of solvency that is typically what policy makers aim to achieve.

Mr. Sanders says he also would propose an expansion of federal support for child care and preschool, though he hasn’t said how much those programs would cost, and they aren’t included in this total.

His most expensive proposal, by far, is his plan to extend Medicare, the federal health program for seniors, to all Americans. Mr. Sanders hasn’t released a detailed plan yet.

Mr. Gunnels, the Sanders aide, said the campaign hasn’t worked out all details on his plan—for instance, his version might allow each state to run its own single-payer system. But he said the $15 trillion figure was a fair estimate. …

So far, the tax increases Mr. Sanders has proposed are concentrated on Americans earning at least $250,000 a year and on corporations. They include increases in the capital-gains tax, the estate tax and personal income-tax rates for the wealthiest Americans. He also would impose a fee on financial transactions, with investment companies taxed on every stock they trade.

Taken together, these proposals are attractive to many Democrats, said Jared Bernstein, an economist at the liberal Center on Budget and Policy Priorities, and would transform the U.S. into an economy much more like those in Europe, with a significantly larger share of economic activity in government hands. “It’s not the model we employ [in the U.S.], but it is a viable economic model,” he said. Still, he cautioned the revenue would have to come from the middle class as well as the wealthy.

More-centrist Democrats think it is a bad idea. “We are not a country that has limitless resources. You need to tamp on the brakes somewhere, but he doesn’t,” said Jim Kessler, senior vice president for policy at the Democratic think tank Third Way. “There’s no such thing as free college; somebody is going to be paying for it.”

Conservative economists say higher government spending would hurt long-term economic growth and that this much would stunt it altogether. “If we’re putting our resources into government, that’s a place where you’re not going to get productivity gains,” said Kevin Hassett, an American Enterprise Institute analyst who has advised many GOP presidential candidates but is unaffiliated this year. Mr. Hassett said the tax increases required to pay for the Sanders program would be “massively catastrophic.”

Even many Democrats say such a plan would be politically infeasible. Austan Goolsbee, an economist at the University of Chicago and former adviser to President Barack Obama, recalled the difficulty winning congressional approval for the stimulus and health legislation at a time of large Democratic majorities in Congress.

“Much, much more modest actions than those Bernie Sanders is describing were extremely heavy lifts, and many thought impossible,” he said. “Both of them came down to a single vote.”

1. Describe the programs Democratic candidate Bernie Sanders says he will implement if he is elected president.

2. a) How much would Sen. Sanders’ programs cost?
b) What is significant about this amount? Be specific.

3. How does Bernie Sanders propose to pay for the programs he wants to implement?

4. By how much would Sen. Sanders’ programs increase government spending?

5. How do Hillary Clinton’s proposed government programs compare to those of Sen. Sanders?

6. What additional program does Sen. Sanders say he will propose? What information has not been provided for this?

7. a) How do liberal economists view Sen. Sanders’ proposed programs?
b) What did centrist Democrat Jim Kessler say about the proposal?
c) With whom do you agree? Explain your answer.

8. a) How do conservative economists view Sen. Sanders expansion of government programs?
b) What do you think of this viewpoint? Explain your answer.
c) Ask a parent the same question.

9. a) As a self-professed socialist, Senator Bernie Sanders was at first dismissed as a candidate with no chance against front-runner Hillary Clinton. But as his support has increased, Mrs. Clinton’s support has been declining.  Americans have to decide what country we want: one where the government plays a larger role in our everyday lives, providing for many of our needs (by using our tax dollars to do so, making us more like European economies); or one where the government plays a minimal role in our everyday lives, allowing us to provide for ourselves.  With which position are you more likely to agree?  Explain your answer.
b) What do you think about this rise in popularity? Is Bernie Sanders the anti-Hillary the way Donald Trump and Ben Carson are the anti-Jeb Bush? In other words, the anti status-quo? Is this good for the country?