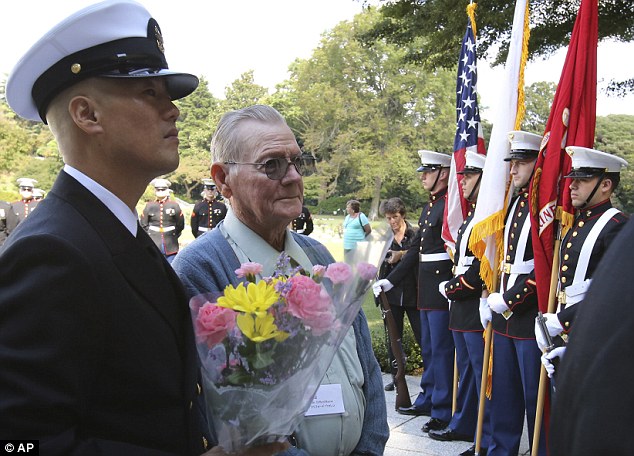 (AP and Daily Mail) – Nine former American servicemen who were held as prisoners during World War II were in Japan on Monday to revisit some of the places they were held seven decades ago and recount their memories.

The men, all in their 90s, opened their tour with a memorial service for their fellow fallen soldiers at the Commonwealth War Graves near Tokyo.

As they marked the 70th anniversary of the end of the war, the emphasis was on reconciliation.

George Rogers, of Lynchburg, Virginia, said he had no hard feelings.

Now 96, he was taken captive by the Japanese after surviving the infamous Bataan death march in April 1942 and forced to work at the Yawata steel plant in southern Japan, or today’s Nippon Steel & Sumitomo Metal Corp.

During his nearly 3 1/2 years of captivity, Rogers was given meager food rations and repeatedly beaten up.

He said that he was lucky to survive, but that he harbored ‘no hard feelings’ toward his captors. “They didn’t give me any food, and I didn’t get much water when I needed it, but other than that, it was a long trip, very far,” he said.

A month after Japan’s August 15, 1945, surrender, Rogers returned to the U.S. in skin-and-bone state, weighing only 85 pounds despite being 6-foot-3.

His doctor told him then that he would most likely not live past 45 or 50, keep his teeth or have children.

Rogers still has his teeth, and has five children.

One of them, Jeffrey, accompanied him on his trip to Japan.

Historians say some 30,000 allied force members were held as prisoners in Japan during World War II.

During the Bataan march, thousands of prisoners were forced to walk more than 60 miles under severe, sweltering conditions while being abused by their captors. Many died.

Some 12,000 American prisoners were shipped to Japan and forced to work at more than 50 sites to support imperial Japan’s war effort, according to Kinue Tokudome, director of the US-Japan Dialogue on PoWs, who has spearheaded the lobbying effort for companies to apologize.

About 10 percent of those were estimated to have died, according to Tokudome, though the US Congressional Research Service says that 40 per cent of the 27,000 Americans taken prisoner in the Pacific Theater died in captivity.

Lawuits in Japan and the US by POWs seeking compensation have been denied by courts because of a 1952 treaty that offered mild compensation to the victims.

More than 60 companies are thought to have used the slave labor, including major ones such as Nippon Steel. …

Discussion of American POWs’ treatment is taboo in Japan, though talk of the issue has recently begun to increase.

A museum exhibition that opened earlier this year in Kyushu University had a small section about a group of soldiers who were used for medical experiments, according to the Telegraph.

None of the US soldiers survived after seawater was allegedly injected into their veins and parts of their livers were removed to see if they would stay alive. Two emaciated prisoners after their release from a Japanese prison camp in Formosa.

2. What was the emphasis of the former POW’s trip to Japan this week?

3. How many American POWs were forced into slave labor in Japanese companies during WWII?

4. How many Japanese companies are thought to have used American prisoners of war as slave labor?

6. Watch the videos under “Resources” below. The term atrocity is often associated with Japanese treatment of their enemies.  People refer to ‘Japanese atrocities’ of WWII. Atrocity is defined as a very cruel or terrible act or action.

a) What do you think of Lester Tenney’s 2010 insistence on receiving an apology from Japanese private companies that abused American POWs?

b) What do you think of the other men’s comments on the Japanese treatment of POWs in WWII?

The 9 former US prisoners of war who traveled to Japan last week are:

Read brief bios of the men at: tuj.ac.jp

In July 2015, Japan’s Mitsubishi Materials made a landmark apology to US prisoners of war forced to work in its mines during World War II, seven decades after the conflict.

The Japanese government only officially apologized to former American POWs five years ago (in 2010), and Mitsubishi’s initiative appeared to be the first of its kind by a Japanese corporation.

In Los Angeles, senior Mitsubishi executive Hikaru Kimura presented a “most remorseful apology” to 94-year-old James Murphy of California, one of just a few surviving US prisoners forced to work in Japan.

“For 70 years since the war ended, the prisoners of war who worked for these Japanese companies have asked for something very simple, they asked for an apology,” he said.

“We hope to extend Mitsubishi’s gracious coming forward at this time to all the other mines and factories who employed American POWs against their will.”

Kimura and other company representatives met earlier with Murphy and families of other former POWs “to express our most remorseful apology for their being subjected to hard labor during World War II, when they worked in mines operated by Mitsubishi,” he said.

The sprawling conglomerate, which now makes everything from cement to electronics, forced about 900 POWs to work in hard labor at four mines in Japan.

Thousands of other US prisoners were pushed into slave labor at Japanese firms during the war. (from a July 20 AFP report)