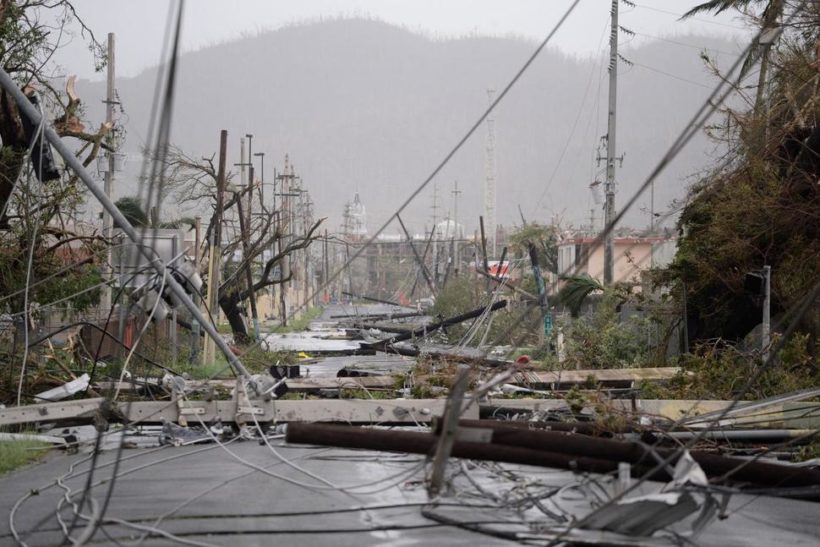 (by Devika Krishna Kumar, Reuters) – NEW YORK – Utility crews from the U.S. mainland were scrambling to Puerto Rico on Thursday after Hurricane Maria left nearly the entire U.S. territory, and many of its Caribbean neighbors, without power, according to officials.

The Puerto Rico Electric Power Authority (PREPA) reported almost 100 percent of its 1.5 million customers were without power as of late Wednesday, the U.S. Department of Energy (DOE) said in an update on the hurricane’s impact on Thursday, after Maria’s winds snapped trees and utility polls.

Puerto Rico Governor Ricardo Rossello told CNN … [that as a result of the powerful Category 4 hurricane, no one on the island has power from PREPA utilities since the power grid is “a little bit old, mishandled and weak.”

“It depends on the damage to the infrastructure,” Rosselló said. “I’m afraid it’s probably going to be severe. If it is … we’re looking at months as opposed to weeks or days. It’s nothing short of a major disaster.”

President Donald Trump said the US territory had been ‘absolutely obliterated’ by the devastating storm. He described Puerto Rico as in ‘very, very, very perilous shape’ and said US emergency authorities were starting to work on helping in the recovery.

CNN reports that Ricardo Ramos, the CEO of PREPA said Puerto Ricans, might not get power back for four to six months.]

In the U.S. Virgin islands, the majority of the 25,000 customers on St. Croix were also reported to be without power, the DOE report added.

Energy support crews have been deployed to St. Thomas and St. Croix in support of Federal Emergency Management Agency (FEMA) teams there, and others are prepared to deploy to Puerto Rico as soon as conditions permit, the DOE said.

The American Public Power Association said it was also bringing in utility and contractor crews from parts of the U.S. mainland to help with recovery efforts.

At least one support team is already in Puerto Rico, said Mike Hyland, senior vice president, engineering services at the association, in a phone interview.

“They’ve been in San Juan since Maria passed and I believe they’re going today to St. Thomas. … Right now our mission is to get the lights back on,” he said, adding that there were limited flights and barges serving the islands.

The power outages have forced critical facilities, like hospitals, to rely on generators, and raised concerns about potential fuel shortages as some gas stations may not have backup power.

“The fuel is there, you just can’t pump it,” said Patrick DeHaan, petroleum analyst at Gasbuddy.

Maria killed at least 10 people as it raged through the Caribbean, the second major hurricane to do so this month. It packed winds of up to 155 mph, when it made landfall on Puerto Rico on Wednesday as the strongest storm to hit the U.S. territory in nearly 90 years.

Maria’s devastation comes just as Puerto Rico, which is facing the largest municipal debt crisis in U.S. history, and PREPA, which is bankrupt, were recovering from Hurricane Irma, which grazed the island, knocking out power to two-thirds of the residents.

Petroleum supplies just under half of the island’s electricity, and natural gas supplies nearly one-third, according to federal government data.

Maria, which could strengthen somewhat over the next day or so, was forecast to move north in the Atlantic Ocean over the weekend, the NHC said.

2. How many customers in Puerto Rico are without power following the Category 4 Hurricane Maria?

3. a) Puerto Rico Governor Ricardo Rossello said power restoration could take “months as opposed to weeks or days.” How did he describe PREPA’s power grid?
b) How long did PREPA’s CEO Ricardo Ramos estimate it would be before power could be restored?
c) What was President Trump’s response to this latest hurricane disaster?

4. a) How are hospitals and other critical facilities getting power?
b) What is concerning about this solution?

5. What monetary challenge does PREPA face in the aftermath of the hurricane?

How to help Puerto Rico:

Samaritan’s Purse is a charity organization that does disaster relief in the U.S. and around the world. Read about what they are doing to help at samaritanspurse.org.

“We had a large meeting with hundreds of churches involved, so we have a network of pastors and churches that we work through,” said Graham. “That’s how we distribute in the community. The local church knows better than anyone where else the needs are. Where the elderly are, where the people that have lost everything are living, so we work with the churches.”

Graham noted that the group already had been working with those affected by Hurricanes Irma and Harvey, and have several large-scale items to move in for Maria.

“We’ve got 1,000 generators that were taken in; we’ve ordered another 1,000,” said Graham. “We’ve got plastic tarps. These are heavy duty tarps that if the person lost their roof, they can put that on, and it will keep them in the dry. It’s not a permanent fix, but it’s a temporary solution. We’ve got people there, we’re just waiting for the airport to open.”

Watch a CNN report on Hurricane Maria in Puerto Rico:

Watch a report on Puerto Rico’s financial crisis prior to Hurricane Maria:

From Forbes Media, regarding Puerto Rico’s power problems:
We have the news [July 3] that Puerto Rico’s power utility has, in effect, declared bankruptcy–that’s generally what happens when people hand out something valuable and expensive to produce, like electricity, for free. That is, amazingly, what the island has been doing for years now, giving the electricity used by municipalities to them for free. But the oil companies weren’t giving said utility the oil so the costs just mounted and mounted. We might call this the Venezuelan mistake, ignoring the point of why we have proper markets in the first place. (by Tim Worstall, 7/3/17)

In Puerto Rico, the grid was in sorry shape long before Maria — and Hurricane Irma two weeks ago — struck.

The territory’s $73 billion debt crisis has left agencies like the state power company broke. It abandoned most basic maintenance in recent years, leaving the island subject to regular blackouts.

“We knew this was going to happen given the vulnerable infrastructure,” Gov. Ricardo Rossello said.

FEMA (the Federal Emergency Management Agency) said it would open an air bridge from the U.S. mainland on Friday, with three to four military planes flying to the island every day carrying water, food, generators and temporary shelters.

“There’s a humanitarian emergency here in Puerto Rico,” Rossello said. “This is an event without precedent.”

He said his administration was trying to open ports soon to receive shipments of food, water, generators, cots and other supplies.

The government has hired 56 small contractors to clear trees and put up new power lines and poles and will be sending tanker trucks to supply neighborhoods as they run out of water. The entire island has been declared a federal disaster zone.

Mike Hyland, senior vice president of engineering services for the American Public Power Association, a utility industry group that is sending repair crews into the Caribbean, refused to speculate on how long it would take to restore power in Puerto Rico.

“Let’s see what the facts tell us by the end of the weekend,” he said. But he acknowledged: “This is going to be a tall lift.”

Cellphone and internet service collapsed in much of Puerto Rico. The only radio station that remained on the air during the hurricane — WAPA 680 AM — was relaying messages to help connect friends and families.

Other concerns were more prosaic. Across the street, someone yelled at a neighbor, “Listen, do you have Netflix?!” (from AP)