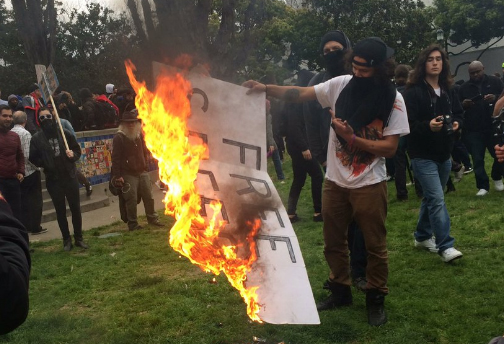 (by Katie Mettler, The Washington Post) OREGON – For 10 years, the 82nd Avenue of Roses Business Association has kicked off the city of Portland’s annual Rose Festival with a family-friendly Rose parade meant to attract crowds to its diverse neighborhood.

Set to march in the parade’s 67th spot this year was the Multnomah County Republican Party, a fact that so outraged two self-described antifascist groups in the [heavily Democratic] Oregon city that they pledged to protest and disrupt the April 29 event.

Then came an anonymous and ominous email, according to parade organizers, that instructed them to cancel the GOP group’s registration — or else. [While the author of the email did not specify any affiliation to a particular group, they did include links to two different Facebook events of counter-protests; one by Direct Action Alliance and the other from Oregon Students Empowered.] The anonymous email read in part:

“You have seen how much power we have downtown and that the police cannot stop us from shutting down roads so please consider your decision wisely,” the anonymous email said, referring to the violent riots that hit Portland after the 2016 presidential election, reported the Oregonian. “This is nonnegotiable.”

The email said that 200 people would “rush into the parade” and “drag and push” those marching with the Republican Party.

“We will not give one inch to groups who espouse hatred toward LGBT, immigrants, people of color or others,” it said.

On Tuesday, the business association buckled, announcing it would cancel the parade altogether. [Republican chair James Buchal said organizers asked them to withdraw from the parade, an event they’ve participated in for several years. Buchal declined the offer and instead called on Portland Police Chief Mike Marshman, Multnomah County DA Rod Underhill, and Mayor Ted Wheeler to provide security.]

Organizers said in a statement, “Following threats of violence during the Parade by multiple groups planning to disrupt the event, 82nd Avenue of Roses Business Association can no longer guarantee the safety of our community and have made the difficult decision to cancel the Parade.”

[Rich Jarvis, a spokesperson for the Rose Festival Foundation, says organizers could not legally un-invite the MCRP to the parade because they were already approved. He added that Venture Portland canceled the event out of an abundance of caution, considering the potential safety impacts to all attendees at the parade.

“You can’t really prevent it. You can be aware, you can be ready, anticipate, but if somebody’s going to do something to interrupt or to attack – if you want to use that word – you can’t really be in position to prevent it,” said Jarvis.]

The “antifascist” groups Oregon Students Empowered and Direct Action Alliance were behind the organized protests scheduled for the parade Saturday but told the Oregonian they had nothing to do with the anonymous email. …

[OregonLive reported; “Jarvis said the festival has received other threats from local protest groups, who voiced displeasure about the annual Fleet Week event in particular. While it would be significantly more difficult to disrupt an event of that magnitude, it’s within the realm of possibility.”]

Online, others were outraged, calling members of the antifascist groups who planned to protest “snowflakes,” “anti-American” and “a bunch of chickens and brats.”

“Shutting down free speech is the (epitome) of fascism,” one person wrote on Facebook. “This is America.”

The free speech uproar in Portland reflects controversies across the country, particularly on college campuses, where speakers with conservative…ideologies have been met with occasionally violent protests or threats of protests.

Appearances [on university campuses] by former Breitbart writer Milo Yiannopoulos, [libertarian author and political scientist Charles Murray] and, most recently, conservative commentator Ann Coulter have all been disrupted or canceled [due to protests, despite the fact that student groups had invited the speakers and wanted to hear what they had to say].

In a statement, protest group Direct Action Alliance said it was “disappointed” that the parade was canceled but added that “no Portland child will see a march in support of this fascist regime go unopposed.” [The “fascist regime” they refer to is President Trump. The parade kicks off the annual Rose Festival and is not a Trump parade.]

James Buchal, chairman of the Multnomah County Republican Party, said in a statement that his group wants the parade to continue.

“The bottom line is that Portland needs to choose between supporting terrorist thugs and protecting average citizens who want to participate in their community,” Buchal said. “The Multnomah County Republican Party is not composed of ‘Nazis’ and ‘white supremacists’ and those who think we would tolerate marching in a parade with folks carrying swastikas are delusional.”

Reprinted here for educational purposes only. May not be reproduced on other websites without permission from The Washington Post. Visit the website at washingtonpost .com.

1. Portland, Oregon’s annual Rose Festival has taken place for over 100 years. What is Portland’s Rose parade?

2. As is typical for many local Democrat and Republican party groups in parades across the country, the Multnomah County Republican Party was set to march as usual in this parade. What did two self-described “antifascist” groups threaten to do this year if the Republicans were allowed to march?

3. a) What additional threat was made against the parade through an anonymous email? Be specific.
b) What reason did those behind the email give for their threat to “drag and push” law-abiding citizens out of the parade?
c) Define espouse. Do you know any Republicans? Ask them if they espouse hatred toward these groups.

4. a) Before canceling the parade due to threats, what did the organizers ask the Republican group to do?
b) What is your reaction to this request? and to the fact that the Republicans declined, but instead asked the police and mayor for protection?

5. The “antifascist” groups who organized protests over the parade due to the Republicans marching said they were not responsible for the threatening email. What do you think?

6. How did James Buchal, chairman of the Multnomah County Republican Party, explain his group’s belief that the parade should continue? How does he defend the MC Republicans?

7. What role do you think the Portland mayor and police department should have in ensuring the right of every citizen who had been approved to march in the parade to be able to do so safely?

8. What do you think:
a) Is there a double-standard in Portland? If conservative protest groups opposed a Democratic Party group marching in the parade because they disagreed with their point of view on issues and called for protests against them, would the result have been the same? Explain your answer.
b) How should university officials and police and local government officials respond when protesters shut down a talk or threaten marchers in a parade?

9. Fascism is defined as: a political system based on a very powerful leader, state control of social and economic life, and extreme pride in country and race, with no expression of political disagreement allowed (Cambridge Dictionary).
Why do you think the progressives and anarchists, who forcefully shut down any speech or group they oppose, call those they oppose fascists?