Podium on standby for Biden in first Democratic presidential debate 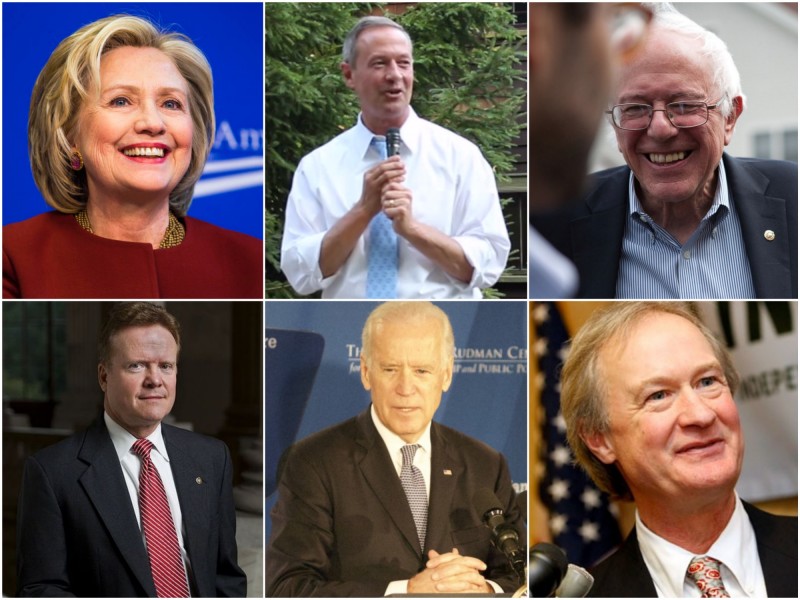 There will be five top candidates on stage for Tuesday night’s first Democratic Party presidential debate, and one conspicuous absence in Vice President Joe Biden — although CNN will have a podium available on stage just in case.

The network…has…re-written its participation rules to allow the vice president to participate even if he doesn’t declare his candidacy until Tuesday morning.

Yet Biden is considered a long-shot to participate, as CNN itself has reported.

CNN and other media outlets have reported that Biden is extending his initial early October deadline for a candidacy decision, and is not expected to make the trip to Nevada today for the first debate. That matches earlier assumptions against Biden’s participation in the debate from those close to him, even though the vice president convened a summit of sorts of family members and advisors this past weekend. However, the next debate is only a month away, [on Nov. 14] in Des Moines, Iowa, giving Biden plenty of time to make at least five of the six scheduled debates. Advisors close to Biden say a decision later in October is more likely than the first half of the month.

Of greater concern is an upcoming series of deadlines to get on primary ballots in some states. Those dates start popping up in November.

However, Biden has also expressed in national interviews his satisfaction with the possibility that he may not make up his mind in time for the various deadlines.

According to a compilation of major, recent polls, Real Clear Politics (RCP), Clinton enters Tuesday’s debate still in the top spot, with commanding leads over both Sanders and Biden, her two closest potential competitors.

RCP had Clinton at 42 percent as of late last week, compared to 25.4 percent for Sanders and 18.6 percent for Biden [who hasn’t even said yet if he would run].

Those are national poll numbers, however — when the focus is narrowed to Iowa, Clinton’s lead over Sanders is only 6.3 percent. And in New Hampshire, the senator from neighboring Vermont is actually leading Clinton by 9.2 percent.

Biden is in third place in both states, according to RCP.

Tuesday’s debate is scheduled to air at 8:30 p.m. Eastern time.

Reprinted here for educational purposes only. May not be reproduced on other websites without permission from London’s Daily Mail.

1. What did debate host CNN do to accommodate Vice President Joe Biden if he announces his candidacy for president on the day of the first Democratic primary debate?

2. What preparation has CNN made for Vice President Biden’s possible appearance at this first debate?

4. a) How many Democratic presidential candidates will be in the debate if Joe Biden announces his candidacy?
b) How is Joe Biden doing in the polls before he has even announced his final decision on running for president?

5. Whether you would like Vice President Biden to run or not, do you support CNN’s change of rules to accommodate him in the debate? (Should his high poll numbers make a difference?) Explain your answer.

6. The first two Republican presidential primary debates had a record-breaking number of viewers:

How do you think Vice President Biden’s participation will affect the number of viewers in the Democratic debate?

CHALLENGE: Watch tonight’s debate between the candidates. Pay attention to the questions the moderators ask. Fill in the “Presidential Primary Debate” chart for the questions below:

What to expect at the first Democratic debate

The storyline of the Democratic presidential contest so far has been the surprisingly successful challenge by democratic socialist Bernie Sanders to frontrunner Hillary Clinton. And this will be the first time they’re debating face to face — so the big question is how they’ll handle each other.

Sanders, for instance, has tried quite hard to stick to the issues, and has generally avoided media-presented opportunities for him to explicitly attack Clinton. Since this is only the first debate, and things have generally been going well for Sanders’s campaign, I expect he’ll keep doing that, and emphasize how much he respects Clinton — while implying that he has very different views from her on core issues. One tricky issue for him, though, could be gun control, where he has a less liberal record than Clinton or O’Malley.

Hillary Clinton’s debate performances during the 2007-’08 campaign were generally strong, but it’s been a long time since then, and she’s facing different opponents. Since she’s being attacked from the left, expect her to emphasize how much she agrees with Sanders — while also implying that she’s more realistic, pragmatic, and electable. The moderators will surely ask about her recent announcement that she opposes the Trans-Pacific Partnership — and her rivals will surely try to portray this position as opportunistic.

Then there are the other candidates — none of whom have had any discernible success in the campaign yet, and all of whom will be eager to make some kind of splash. Expect them all to pile on and attack Clinton.

Martin O’Malley, for instance, likely began this year thinking he’d be getting all the attention as Clinton’s strongest challenger, and has been trying hard to position himself to her left. Yet Sanders has gotten all the buzz from progressive activists. So while O’Malley will surely try to contrast himself to Clinton as usual, watch to see if he goes after Sanders too — perhaps emphasizing his own lifelong Democratic roots, in contrast to Sanders’s lack of membership in the party. The moderators will likely quiz O’Malley about his record on policing issues in Baltimore, which is controversial on the left due to his support of zero-tolerance policing.

As for Webb and Chafee, who knows? These two lower-profile candidates appear to be less focused on actually winning — and could therefore be loose cannons. According to MSNBC’s Alex Seitz-Wald, who reviewed their past debate performances, Webb is “humorless and combative” with “an ability to aggravate opponents,” and Chafee is “surprisingly ferocious.” Both will probably argue that Clinton is too hawkish on foreign policy. (from a Vox .com analysis by Andrew Prokop on October 12, 2015)