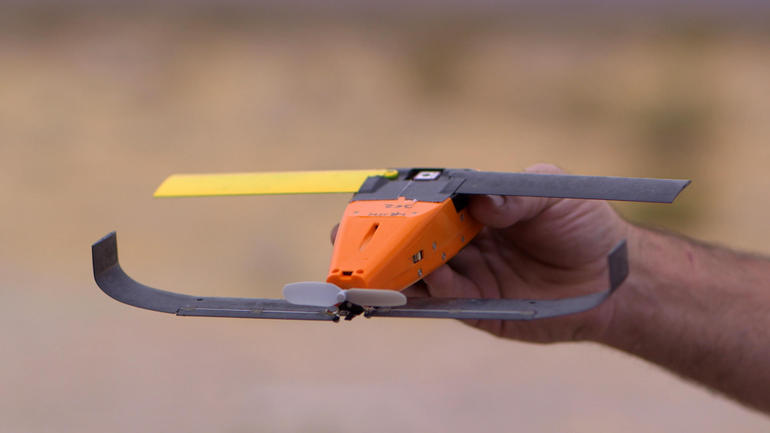 The micro-drones demonstrated advanced swarm behaviors such as “collective decision-making, adaptive formation flying, and self-healing,” according to a Defense Department statement Monday.

“This is the kind of cutting-edge innovation that will keep us a step ahead of our adversaries. This demonstration will advance our development of autonomous systems,” Secretary of Defense Ash Carter, who created the SCO in 2012, said in the statement.

The test was conducted in October and aired on Sunday’s CBS News program 60 Minutes, according to a Defense Department (DoD) press release.

“Due to the complex nature of combat, Perdix are not pre-programmed synchronized individuals. They are a collective organism, sharing one distributed brain for decision-making and adapting to each other like swarms in nature,” said SCO Director William Roper. “Because every Perdix communicates and collaborates with every other Perdix, the swarm has no leader and can gracefully adapt to drones entering or exiting the team.”

Developed by engineering students at the Massachusetts Institute of Technology [MIT] in the Aeronautics and Astronautics Department; Perdix drones were eventually modified for military application at MIT’s Lincoln Laboratory in 2013.

Previous successful demonstrations have included an air-drop from F-16 flare canisters by the Air Force Test Pilot School at Edwards Air Force Base in 2014; and in 2015, roughly 90 Perdix missions were undertaken during U.S. Pacific Command’s Northern Edge exercise in Alaska, an exercise that witnessed the first successful swarm test of 20 Perdix drones.

The SCO plans to partner with the Defense Industrial Unit‐Experimental (DIUx), an organization announced by Carter to promote and facilitate technological development for the U.S. military in 2015, in order to produce a thousand units this year.

Reprinted here for educational purposes only. May not be reproduced on other websites without permission from Military Times.

3. What are Perdix drones able to do? How do they work?

4. a) What is the role of the Secretary of Defense?
b) What did Defense Secretary Ash Carter, who created the SCO in 2012, say about the Perdix?

5. Who/where was the Perdix developed?

6. Watch the videos under “Resources.” What do you think of this technology? – are you inspired, amazed, concerned, etc.? Explain your answer.

7. Our first thought upon seeing this news report was: Why is the government publicizing this information to our enemies?
Upon reading further, we learned that in November, SCO Director Will Roper explained that the way SCO (the Pentagon’s Strategic Capabilities Office) stays ahead of our adversaries is simple: “You just don’t talk about your best capabilities.” He said, “One of the things we’re going to have to remember — and that we did quite well in the Cold War — is to [maintain] a good balance between the capabilities that we show to the world for deterrence versus those that we keep behind the door for warfighting overmatch.” SCO has wrestled with this balance since SCO was established in 2012, Roper said, noting that SCO keeps its best ideas “behind the door and probably always will because what we owe to our future operators is an unfair fight.”
What do you think about this strategy? Explain your answer.

Watch a Stars and Stripes report: