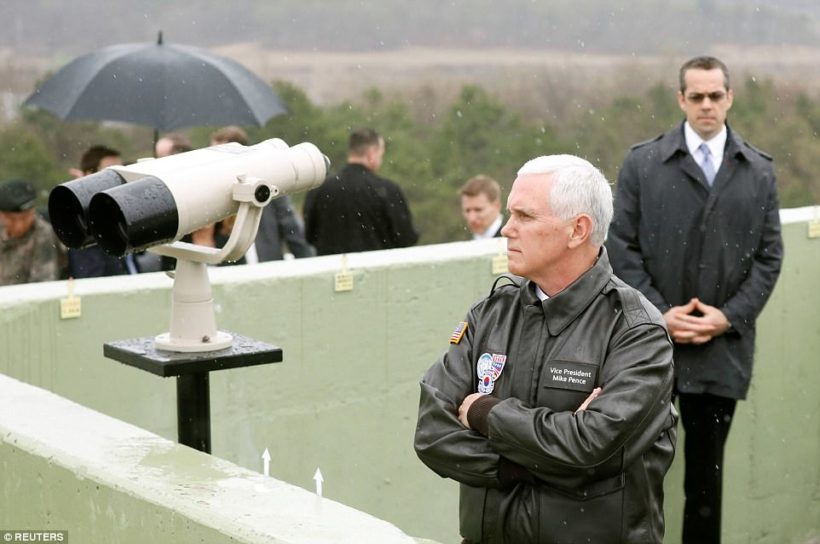 Vice President Pence is seen above looking toward the north from an observation post inside the DMZ (Demilitarized Zone) separating the two Koreas in Paju, South Korea. The visit carries a great deal of symbolism for Mr. Pence personally. His late father, Edward, served in the Army during the Korean War and was awarded the Bronze Star on April 15, 1953.

(by Roberta Rampton and Ju-min Park, Reuters) SEOUL — U.S. Vice President Mike Pence put North Korea on notice on Monday, warning that recent U.S. strikes in Syria and Afghanistan showed that the resolve of President Donald Trump should not be tested.

Pence and South Korean acting president Hwang Kyo-ahn, speaking a day after a failed missile test by the North and two days after a huge display of missiles in Pyongyang, also said they would strengthen anti-North Korea defenses by moving ahead with the early deployment of the THAAD missile-defense system. [The Terminal High Altitude Area Defense (THAAD) is meant to intercept and destroy short- and medium-range ballistic missiles during the last part of their flights. China opposes THAAD’s deployment, claiming it would compromise its security. (Why do you think they really oppose its placement in South Korea?]

Vice President Pence is on the first stop of a four-nation Asia tour intended to show America’s allies, and remind its adversaries, that the Trump administration was not turning its back on the increasingly volatile region.

“Just in the past two weeks, the world witnessed the strength and resolve of our new president in actions taken in Syria and Afghanistan,” Pence said in a joint appearance with Hwang.

“North Korea would do well not to test his resolve or the strength of the armed forces of the United States in this region,” Pence said.

The U.S. Navy this month struck a Syrian airfield with 59 Tomahawk missiles after Syrian President Bashar al-Assad launched a chemical weapons attack on civilians. Then on Thursday, the U.S. military dropped “the mother of all bombs,” the largest non-nuclear device it has ever unleashed in combat, on a network of caves and tunnels used by Islamic State in Afghanistan. [in the region that U.S. Army Green Beret  Staff Sgt. Mark De Alencar was killed by ISIS terrorists last week.]

“I express again a strong support and alliance to the Syrian government and its people for its work of justice, condemning the United States’ recent violent invasive act against your country,” Kim said. On a visit to the (demilitarized zone) border between North and South Korea earlier in the day, Pence, whose father served in the 1950-53 Korean War, said the United States would stand by its “iron-clad alliance” with South Korea.

“All options are on the table to achieve the objectives and ensure the stability of the people of this country,” he told reporters as tinny propaganda music floated across from the North Korean side of the demilitarized zone (DMZ).

President Trump’s national security adviser, H.R. McMaster, indicated on Sunday that the President was not considering military action against North Korea for now, even as a nuclear-powered aircraft carrier strike group was heading for the region.

“It’s time for us to undertake all actions we can, short of a military option, to try to resolve this peacefully,” he said on ABC’s “This Week” program.

Tensions have risen as President Trump takes a hard rhetorical line with Kim Jong Un, who has rebuffed admonitions from China and proceeded with nuclear and missile programs seen by Washington [and much of the world] as a direct threat. … A North Korean soldier takes photographs during Pence’s visit to the DMZ while another soldier from the Communist country looks on.

China banned imports of North Korean coal on Feb. 26, cutting off its most important export and Chinese media has raised the possibility of restricting oil shipments to the North if it unleashed more provocations. [The ban is a massive blow to North Korea, as coal is the nation’s top export and China it’s number one customer. China is now importing significant quantities of coal from the United States in order to make up for the coal lost by the North Korean ban.]

Pyongyang has conducted several missile and nuclear tests in defiance of U.N. sanctions, and has said it has developed and would launch a missile that can strike the U.S. mainland.

U.S. officials and experts believe it is some time away from mastering the necessary technology, including miniaturizing a nuclear warhead.

2. What steps are the U.S. and South Korea taking in response to North Korea’s defiant nuclear program and missile tests?

3. What is the purpose of Vice President Pence’s four-nation Asia tour?

4. What assurance / warning did Pence make on a visit to the DMZ?

5. a) What did NSA head H.R. McMaster say about U.S. response to North Korean aggression?
b) What possible actions is the U.S. considering taking against North Korea at this time?

6. Watch the news reports under “Resources.” What is your reaction to VP Pence’s visit to South Korea and warning to North Korea? (positive? negative?) Explain your answer.

7. a) The “period of strategic patience” lasted throughout the Bush and Obama presidencies. Ask a parent or grandparent if he/she can explain this strategty to you. (There is some info under “Background” below the questions.)
b) The “period of strategic patience” did not succeed and instead has allowed North Korea to develop inter-continental ballistic missiles capable of reaching California, as well as proceed in their quest for nuclear weapons. What do you think of President Trump’s stern warning to North Korea? (good strategy? dangerous strategy? better not upset the insane dictator? tough talk is dangerous – better to use negotiations only? tough talk is the only thing North Korea will listen to?) Explain your answer.
c) Ask a parent the same question. Discuss your answers.

NORTH KOREA’S NUCLEAR WEAPONS PROGRAM and THE SIX-PARTY TALKS: (portions of this information are from wikipedia.org.)