(from WashingtonTimes.com) – AP, PEARL HARBOR, Hawaii – Aging Pearl Harbor survivors on Tuesday heard reassurances that their sacrifices would be remembered and passed on to future generations as they gathered to mark the 69th anniversary of the attack.

“Long after the last veteran of the war in the Pacific is gone, we will still be here telling their story and honoring their dedication and sacrifice,” National Park Service Director Jonathan Jarvis told about 120 survivors who traveled to Hawaii from across the country for the event. 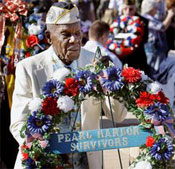 PHOTO on left:  Pearl Harbor survivor Nelson Mitchell, 90, of Phoenix, carries a wreath Tuesday to the USS Arizona Anchor Memorial in Phoenix, to remember those killed on Dec. 7, 1941, when the Japanese attacked a military base in Hawaii, provoking U.S. involvement in World War II. On that day of “infamy,” 2,388 Americans died and 1,178 were wounded. (Associated Press)

Merl Resler, 88, of Newcastle, Calif., was among those who returned. He remembered firing shots at Japanese planes from the USS Maryland and standing in the blood of a shipmate hit by shrapnel during the attack.

“My teeth was chattering like I was freezing to death, and it was 84 degrees temperature. It was awful frightful,” said Mr. Resler.

On Tuesday, fighter jets from the Montana Air National Guard flew above Pearl Harbor in missing-man formation to honor those killed in the attack, which sank the USS Arizona and with it nearly 1,000 sailors and Marines. In all, about 2,400 service members died.

Sailors lined the deck of the USS Chafee and saluted as the guided missile destroyer passed between the sunken hull of the USS Arizona and the grassy landing where the remembrance ceremony was held.

After the ceremony, the survivors, some in wheelchairs, passed through a “Walk of Honor” lined by saluting sailors, Marines, airmen and soldiers to enter a new $56 million visitor center that was dedicated at the ceremony.

“This facility is the fulfillment of a promise that we will honor the past,” Mr. Jarvis said.

U.S. Pacific Fleet commander Adm. Patrick Walsh said the center, which has twice the exhibition space as the old one, would tell the story of those who fought and won the peace.

“This museum gives a view into their lives, a window into the enormity of their task, an appreciation of the heaviness of their burden, the strength of their resolve,” Adm. Walsh said.

Assistant Secretary of the Interior Thomas Strickland said the events of Dec. 7, 1941, were so traumatic and marked by heroism that they had become ingrained in the nation’s consciousness.

“That day is now fundamental to who we are as a people. Its stories must be preserved. They must be honored and they must be shared,” he said.

USS Pennsylvania sailor DeWayne Chartier was on his way to church that day but never made it: “I got interrupted someplace along the line,” the 93-year-old recounted.

He returned to Pearl Harbor from Walnut Creek, Calif., to mark the anniversary and see the dedication of the new center.

1. What assurance did National Park Service Director Jonathan Jarvis give the 120 survivors of the Pearl Harbor attack during a ceremony on Tuesday at the new Pearl Harbor visitors center?

2. a) What is the date of the attack on Pearl Harbor?
b) How many servicemen were killed in the Pearl Harbor attack?

3. Who attacked the U.S. Navy ships at Pearl Harbor?

4. What will the new Pearl Harbor museum show visitors, according to Adm. Patrick Walsh?

5. Assistant Secretary of the Interior Thomas Strickland said of the attack: “That day is now fundamental to who we are as a people. Its stories must be preserved. They must be honored and they must be shared.” Ask a grandparent to tell you what they know about Pearl Harbor.

For photos of Pearl Harbor and the attack, go to the U.S. Navy’s history website at history.navy.mil/photos/events/wwii-pac/pearlhbr/pearlhbr.htm.