(by Zahid Hussain and Matthew Rosenberg, WSJ.com) MINGORA, Pakistan — Thousands of Islamist militants are pouring into Pakistan’s Swat Valley and setting up training camps here, quickly making it one of the main bases for Taliban fighters and raising their threat to the government in the wake of a controversial peace deal.

President Asif Ali Zardari effectively ratified the government’s deal with the Taliban Monday by signing a bill that imposes Islamic law in Swat, a key plank of the accord, hours after legislators overwhelmingly approved a resolution urging it. Pakistani officials have touted the deal, reached in February, as a way to restore peaceful order in the bloodied region — which lies just a few hours’ drive from the capital — and halt the Taliban’s advance.

Yet a visit to the Taliban-controlled valley here found mounting evidence that the deal already is strengthening the militants as a base for war. U.S. officials contend the pact has given the Taliban and its allies in al Qaeda and other Islamist groups an advantage in their long-running battle against Pakistan’s military.

The number of militants in the valley swelled in the months before the deal with the Taliban was struck, and they continue to move in, say Pakistani and U.S. officials. They now estimate there are between 6,000 and 8,000 fighters in Swat, nearly double the number at the end of last year.

Taliban leaders here make no secret of their ultimate aim. “Our objective is to drive out Americans and their lackeys” from Pakistan and Afghanistan, said Muslim Khan, a spokesman for the group, in an interview here. “They are not Muslims and we have to throw them out.”

Militant training camps are springing up across the valley’s thickly forested mountainsides. “Young men with no prospect of employment and lack of education facilities are joining the militants,” said Abdur Rehman, a schoolteacher in Swat.

Until the fighting began nearly two years ago in the valley, it was a popular weekend getaway for well-heeled Pakistanis, known for its alpine ridges, fruit orchards and trout-filled streams. With the Taliban now imposing its harsh version of Islamic law, floggings and even executions are fast becoming commonplace. Residents said many young men are joining the militants to ensure the safety of their families, who they hope will be left in peace if one of their own is fighting the government.

“We are all frightened by this brutality. No one can dare to challenge them,” said Fazle Rabbi, who owns a cloth shop in Mingora, Swat’s main town. The shop sits on a square that has become known among residents as “Slaughter Square” because the Taliban have begun using it to dump bodies after executions.

Since the new peace deal was made, the militants are beginning to push into neighboring areas. Last week they overpowered a village militia in the adjacent Buner district. The attack was a violation of the peace accord. But the Taliban faction that controls Swat says it has no intention of withdrawing. “We want Islamic sharia [law] also to be enforced in Buner,” said Mr. Khan. “No one can force us out from any part of the province.”

Many of the longer-term jihadist fighters are loyal to groups with ties to al Qaeda, such as Jaish-e-Mohammed. … The Taliban and al Qaeda were once largely confined to a mountainous ribbon that runs along the Afghan border and has long existed in a semiautonomous limbo, technically part of Pakistan but never fully under the control of its government.

In the past two years, however, the Taliban and its allies have pushed into areas where Pakistan’s state had held sway, such as Swat, about 100 miles from Islamabad. 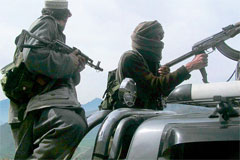 Striking peace deals with some Taliban factions is part of Pakistan’s broader strategy to counter the militants. The government’s logic is that such accords can exploit the groups’ fractious nature; one enemy can be neutralized with a peace deal while another is defeated on the battlefield. The deals also have been struck when the army has struggled to overcome militants. In Swat, about 3,000 militants pushed four times as many soldiers out of the valley in 18 months of fighting, leaving some 1,500 people dead.

Nearly all the peace accords reached in the past few years in areas near the Afghan border, where the Taliban are strongest, have collapsed. Often they have left the militants more powerful. A similar deal in Swat fell apart last year after the Taliban renewed attacks on Pakistani forces.

The Taliban’s actions since the new peace deal was unveiled have alarmed Washington, where officials fear that Swat will become an effective launching pad for expansion into Pakistan’s more densely populated plains. “This is a rest stop for the Taliban, it’s nothing more,” said a U.S. official in Washington.

Swat now offers a glimpse of the Taliban’s vision for Pakistan. They have taken control of the local government and the police, who have been ordered to shed their uniforms in favor of the traditional Shalwar Kameez, an outfit comprising a long shirt and loose trousers. They also have seized Swat’s emerald mines, which extract millions of dollars a year in gemstones.

At barbershops, notices warn men not to shave their beards. Women are no longer allowed to leave their homes without their husbands or male blood relatives. Girls’ schools have been reopened after initially being closed but the students must be covered from head to toe, and Taliban officials routinely inspect classrooms for violators.

“We used to have lots of cultural and extracurricular activities in the school, but all that has been stopped,” said Ziaullah Yousaf Zai, a principal of a private girls’ school in Mingora. “We do not want to give any pretext to the Taliban to shut the school again.”

Mr. Khan, the Taliban spokesman, predicted there would soon be more executions, showing off a list of people whom the Taliban want to try in Islamic courts for what he called their “anti-Islamic” ways. The list includes senior government officials, a woman whose husband is in the U.S. military, and others. Many of them have fled or are in areas outside Taliban control

“These kinds of people should not live,” said Mr. Khan, who also is a commander in the Tehrik-e-Taliban, a broader Taliban alliance focused on battling the Pakistani government.

Islamic courts haven’t yet been set up in Swat because Pakistani President Zardari had delayed signing the bill to impose sharia, as the peace deal stipulates. Until Monday, he had maintained there first must be complete peace in the valley, though he didn’t explain how he would determine that, nor did he address it Monday.

Mr. Zardari’s delay was widely viewed as an attempt to save face with opponents of the deal in his own government and Washington. He relented after the Parliament vote established support from almost every national political party, said a senior official close to the president. One party walked out in opposition.

Mr. Khan had warned of more bloodshed if Islamic law was not formally imposed. “It does not matter to us whether the peace deal stays or not. No one can stop us from setting up our own courts,” he said.

The Taliban were already imposing their own version of sharia, which has been interpreted with wide variations by Islamic scholars for centuries. Pakistani television stations recently broadcast a video of a woman being flogged by black-turbaned Taliban in Swat. Most official accounts say she was alleged to have left her house without a male blood relative.

While Mr. Khan insisted the video was a fake, he acknowledged that such an incident did happen. “As a Muslim, we cannot allow a woman to violate Islamic values,” he said.

Write to Matthew Rosenberg at matthew.rosenberg@wsj.com.

1. Why did Pakistani President Zardari sign a bill that imposes Islamic law in the Swat valley region of Pakistan?

2. What opposite effect is the agreement having in Swat?

4. What is the Taliban’s ultimate objective, according to Muslim Khan, a spokesman for the group?

5. For what reasons are young men in the Swat valley joining the Taliban?

6. How do the citizens of Swat feel about the Taliban?

7. What type of place was Swat before the Taliban took over?

8. After the Taliban signed the peace deal, the group began invading neighboring areas of Swat, a direct violation of the peace accord. What does the Taliban want to do in the Buner district, adjacent to Swat?

9. What is the Pakistani government’s rationalization for striking peace deals with the Taliban?

10. How do U.S. officials view the Taliban’s actions since the new peace deal was unveiled?

11. Under Sharia law, what rules has the Taliban imposed on the citizens of Swat?

12. Taliban spokesman Muslim Khan has a list of people the Taliban wants to execute for their “anti-Islamic” ways. He says “These kinds of people should not live.” The Taliban is imposing Sharia law in whatever areas they control. They are terrorizing the citizens. (Watch a video here.)  Appeasing the Taliban with a peace deal has only given them more control and authority. What do you think the Pakistani government should do to rid Pakistan of the Taliban?

SHARIA LAW
Marriage and divorce are the most significant aspects of sharia, but criminal law is the most controversial. In sharia, there are categories of offenses: those that are prescribed a specific punishment in the Quran, known as hadd punishments, those that fall under a judge’s discretion, and those resolved through a tit-for-tat measure (ie., blood money paid to the family of a murder victim). There are five hadd crimes: unlawful sexual intercourse (sex outside of marriage and adultery), false accusation of unlawful sexual intercourse, wine drinking (sometimes extended to include all alcohol drinking), theft, and highway robbery. Punishments for hadd offenses include flogging, stoning, amputation, exile, or execution.

For pictures and information on the Swat Valley, go to swatvalley.com.

Go to worldatlas.com for a map of Pakistan.

For background information on Pakistan, go to the CIA World FactBook website here.