Obama Marks End of Iraq War to Focus on Economy

(by Jonathan Weisman, The Wall Street Journal, wsj.com) – President Barack Obama on Tuesday formally declared an end to combat operations in the seven-year-old Iraq War and, during an Oval Office address, promised to refocus the government from prosecuting wars to rebuilding the U.S. economy.

Calling on Americans to summon “as much energy and grist and sense of common purpose” to their domestic challenges that U.S. service members applied abroad, Mr. Obama, in an 18-minute address, said, “Now, it is our turn.”

With U.S. troop levels in Iraq now below 50,000, the president marked the end of Operation Iraqi Freedom, launched by his predecessor, George W. Bush, and the start of a military-assistance mission dubbed Operation New Dawn. Mr. Obama said the milestone should serve “as a message to the world that the United States of America intends to sustain and strengthen our leadership in this young century.” He sought to shore up support for his build-up in Afghanistan, where 98,000 U.S. troops are currently stationed, and which Mr. Obama emphasized would not be an “open-ended war.”

Republicans marked the occasion by castigating those Democrats, including Mr. Obama, who had opposed the 2007 troop surge in Iraq and had called for a much earlier end to the war.

“It makes it easier to talk about fulfilling a campaign promise to wind down our operations in Iraq when the previous administration signs the security agreement with Iraq to end our overall presence there,” Senate Minority Leader Mitch McConnell (R., Ky.) said. “It sure makes things easier when you reject your own campaign rhetoric about how the surge…shouldn’t happen and wouldn’t work.” 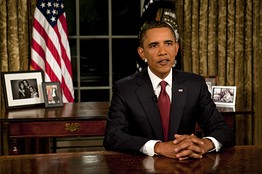 The president used the prime-time forum of his second Oval Office address to move beyond the war debates that launched his White House quest to the more pressing political quagmire threatening his administration: a faltering economic recovery. The U.S. “sent our young men and women to make enormous sacrifices in Iraq, and spent vast resources abroad at a time of tight budgets at home,” he said. “We have met our responsibility. Now, it is time to turn the page.”

The Oval Office address and a quick trip to the Army’s Fort Bliss, outside El Paso, Texas, culminated a two-day commemoration of the end of combat operations in Iraq. Vice President Joe Biden touched down in Baghdad on Monday and declared Tuesday morning that “not withstanding what the national press says,” the nation of Iraq is “much safer” than understood.

Iraqi Prime Minister Nouri al-Maliki-eager for a second term but facing bitter opposition from former Shiite Muslim allies and other political factions after an inconclusive election in March-seized on the milestone to bolster his standing. “Iraq today is sovereign and independent, controlling its fate and everything related to its present and future,” he said. “[O]ur heroic forces and security apparatuses will have the lead role in strengthening security and defending the country.”

For Mr. Obama, the day’s events came amid a slowing economic recovery and political storm clouds gathering ahead of the November elections. He reprised another campaign theme, that taxpayer resources being spent in Iraq should be invested in the U.S. economy. All told, the war in Iraq cost more than $700 billion, according to the … Congressional Budget Office.

“Today, our most urgent task is to restore our economy, and put the millions of Americans who have lost their jobs back to work,” he told the nation. “This will be difficult. But in the days to come, it must be our central mission as a people, and my central responsibility as president.” …

The president told troops earlier at Fort Bliss that they had given Iraq “an opportunity to create a better future for itself” while making the U.S. more secure. That was a break from Mr. Obama’s statement as a candidate that war in Iraq had fanned anti-American sentiment, left the Afghan war effort languishing and made the U.S. less safe.

But Mr. Obama said the end of combat operations was a time to thank U.S. service members, not relive political disagreements, and to acknowledge the sacrifices made in a war that cost more than 4,427 American lives and tens of thousands of Iraqi lives. Another 34,265 U.S. troops were wounded.

“Operation Iraqi Freedom is over, and the Iraqi people now have lead responsibility for the security of their country,” he said from the White House.

He said the debate over the wisdom of the war must end as well. Mr. Obama phoned Mr. Bush briefly Tuesday morning to talk about the speech. Mr. Obama pointedly didn’t credit his predecessor’s “surge” with the conclusion of combat. He did say, “no one could doubt President Bush’s support for our troops, or his love of country and commitment to our security.”

Mr. Obama and his aides were careful not to declare “Mission Accomplished,” a slogan that haunted Mr. Bush for much of his presidency. The U.S. has “no illusions” that violence has ended, Deputy National Security Adviser Benjamin Rhodes said. Instead, Mr. Obama spoke of an “enduring partnership” that will bind Washington and Baghdad for years to come.

Defense Secretary Robert Gates struck a somber tone in a speech to the American Legion’s national convention on Tuesday. “Sectarian tensions remain a fact of life, al Qaeda in Iraq is beaten, but not gone,” Mr. Gates said. “This is not a time for premature victory parades or self-congratulations.”

-Julian Barnes and Sam Dagher contributed to this article.

1. What formal declaration did President Obama make in his Oval Office address to the nation Tuesday night?

2. What did the President emphasize about the war in Afghanistan?

3. a) How did Republican leader Senator Mitch McConnell respond to President Obama’s speech?
b) Do you agree with Sen. McConnell’s response? Explain your answer.

4. What domestic policy did President Obama address in his speech last night?

5. How did the President’s remarks to the troops at Fort Bliss differ from statements he had made when he was a presidential candidate? (see para. 11)

Watch President Obama’s address to the nation at whitehouse.gov/blog/2010/08/31/president-obamas-address-end-combat-mission-iraq.

Watch a video from 2008 when Barack Obama was campaigning for President: