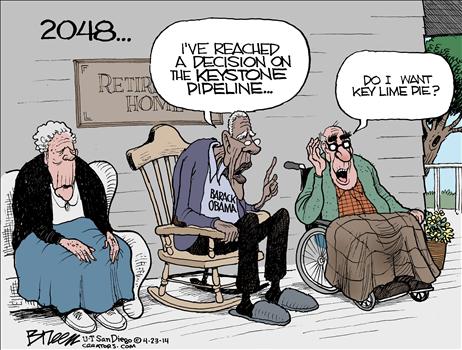 (Reuters) – President Barack Obama on Friday rejected the proposed Keystone XL oil pipeline from Canada in a victory for environmentalists who campaigned against the project for more than seven years.

“The pipeline would not make a meaningful long-term contribution to our economy,” Obama told a press conference. He said it would not reduce gasoline prices, and shipping “dirtier” crude from Canada would not increase US energy security.

The denial of TransCanada Corp.’s more-than-800,000-barrels-per-day project will make it more difficult for producers to develop the province of Alberta’s oil sands. It could also put the United States in a stronger position at global climate talks that start in Paris on Nov. 30, in which countries will aim to reach a deal to slow global warming.

US Secretary of State John Kerry, who determined the pipeline was not in the country’s interest before Obama’s final decision, said approving Keystone “would significantly undermine our ability to continue leading the world in combating climate change.”

Keystone XL would have linked existing pipeline networks in Canada and the United States to bring crude from Alberta and North Dakota to refineries in Illinois and, eventually, the Gulf of Mexico coast.

TransCanada first sought the required presidential permit for the cross-border section in 2008, but the proposal provoked a wave of environmental activism that turned Keystone XL into a rallying cry to fight climate change. Blocking Keystone became a litmus test of the green movement’s ability to hinder fossil fuel extraction in Canada’s oil sands.

“This is a big win,” said Bill McKibben, co-founder of an environmental group which helped make Keystone a symbol of a movement to slow global oil output. Obama’s decision “is nothing short of historic, and sets an important precedent that should send shock waves through the fossil fuel industry.”

TransCanada and other oil companies said the pipeline would have strengthened North American energy security, created thousands of construction jobs and helped relieve a glut of oil.

But since 2008, the United States has experienced a domestic drilling boom which has boosted oil production 80 percent and contributed to a slump in US oil prices from above $100 a barrel to about $44.

Newly sworn-in Canadian Prime Minister Justin Trudeau, a supporter of Keystone, voiced disappointment but said the Canada-US relationship “is much bigger than any one project.”

TransCanada Chief Executive Russ Girling said the company would review its options to potentially file a new application for a pipeline to bring oil sands crude to the United States.

“Today, misplaced symbolism was chosen over merit and science, rhetoric won out over reason,” he said in a statement.

A senior US State Department official left open the possibility TransCanada could seek a different decision under another US administration, telling reporters that “for the State Department to reconsider the application at any time, the company would have to reapply.”

TransCanada had asked the Obama administration on Monday to pause the review, in a move seen by many as an attempt to postpone a decision until a new US president took over in 2017. TransCanada shares fell 5.2 percent on the Toronto stock exchange on Friday to C$42.90.

All the Democratic US presidential candidates oppose the pipeline, while most Republican candidates are in favor.

Friday’s rejection was a loss for Republicans on Capitol Hill who in January had made Keystone their top issue of the new Congress. They passed a bill that would have allowed Congress to decide on the pipeline, legislation Obama vetoed.

Sen. John Hoeven, a Republican from oil-producing North Dakota, said TransCanada would be able to challenge the decision under international trade agreements such as NAFTA or the World Trade Organization.

Obama’s decision will have a “chilling effect” on any company considering building energy infrastructure*, which could leave the United States at risk in the long term of not having the pipelines it needs, Hoeven said in an interview. [*Infrastructure refers to the fundamental facilities and systems serving a country or city necessary for its economy to function. It typically includes structures such as roads, bridges, tunnels, water supply, sewers, electrical grids, telecommunications. Energy infrastructure is the large-scale enabling technologies to transport energy from producer to consumer.]

2. Why did President Obama reject the Keystone XL pipeline?

4. What did Keystone XL represent to environmental groups?

5. a) What benefits did TransCanada and other oil companies say the pipeline would have provided to the U.S.?
b) TransCanada Chief Executive Russ Girling said in a statement, “Today, misplaced symbolism was chosen over merit and science, rhetoric won out over reason.”
Rhetoric is defined as: language that is intended to influence people and that may not be honest or reasonable. Do you agree with Mr. Girling’s assertion? Explain your answer.

6. What concern does Republican Senator John Hoeven have about President Obama’s decision?

7. a) Where do the presidential candidates stand on the Keystone XL decision?
b) TransCanada had asked the Obama administration on Monday to pause the review, in a move seen by many as an attempt to postpone a decision until a new US president took over in 2017. How does your candidate stand on the Keystone issue? Find links to all candidates’ websites at: StudentNewsDaily’s 2016 Presidential Election page.

CHALLENGE: Read the “Background” and check out the links under “Resources.” Does this information change your view of the Keystone XL? Explain your answer.

The belief that man’s activities are not causing an imminent catastrophic change in the climate is held by many other scientists (see MIT’s Professor of Meteorology Dr. Richard Lindzen’s commentary in Newsweek). This view is very unpopular in the media and widely condemned by those who believe man-made global warming is fact. See Newsweek magazine’s online presentation “The Global Warming Deniers.”  Those who do not believe man is causing the global temperature to rise don’t believe it is necessary to reduce the production of CO2 by reducing our use of fossil fuels or to purchase carbon offsets.

Read about Keystone pipeline at: