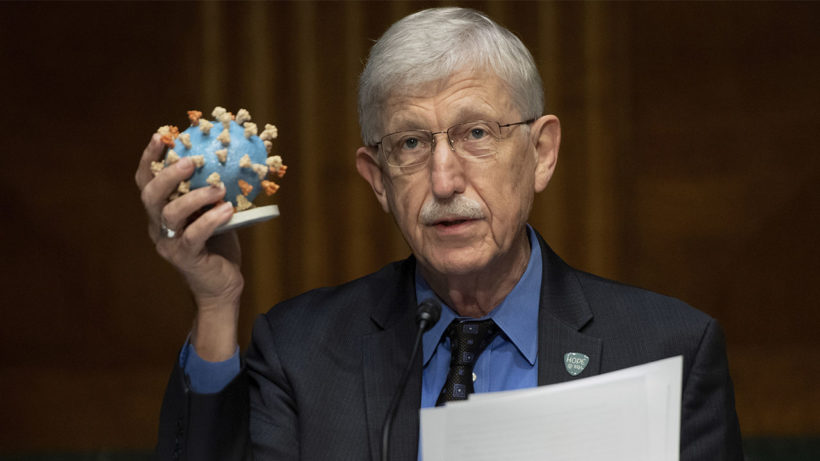 Dr. Francis Collins, Director of the National Institutes of Health (NIH), holds up a model of COVID-19, known as coronavirus, during a Senate Appropriations subcommittee hearing on the plan to research, manufacture and distribute a coronavirus vaccine, known as Operation Warp Speed, Thursday, July 2, 2020, on Capitol Hill in Washington. (Saul Loeb/Pool via AP)

NOTE: On May 15, 2020, the White House announced Operation Warp Speed to accelerate development, production, and distribution of Covid-19 vaccines, therapeutics, and diagnostics to produce and deliver 300 million doses of safe and effective vaccines with the initial doses available by January 2021.

(by Ryan Saavedra, The Daily Wire) — A new report from The New York Times indicates that experts have “genuine confidence” that the coronavirus pandemic will end “far sooner” than originally expected and that President Donald Trump’s Operation Warp Speed — the administration’s efforts to facilitate and accelerate the development, manufacturing, and distribution of vaccines, therapeutics, and diagnostics — has been “working with remarkable efficiency.”

The report, published on Monday, comes with just over three weeks left in the presidential race between Trump and Democrat presidential nominee Joe Biden.

“Experts are saying, with genuine confidence, that the pandemic in the United States will be over far sooner than they expected, possibly by the middle of next year.”

Mr. McNeil’s report noted that the U.S. was “faring much better than it did during the Spanish influenza,” which cost 675,000 Americans their lives, adding, “the country’s population at the time was 103 million, so that toll is equivalent to 2 million dead today.”

The report noted numerous positive developments that have come along the way as the U.S. battles the pandemic, ranging from the average age of those being infected being significantly younger now than at the start of the pandemic to nursing homes becoming better at protecting their patients.

“Sometime in the next three months, health experts say, the FDA is likely to begin granting approval to vaccines now in the works,” the report said.

“Despite the chaos in day-to-day politics and the fighting over issues like masks and lockdowns, Operation Warp Speed — the government’s agreement to subsidize vaccine companies’ clinical trials and manufacturing costs — appears to have been working with remarkable efficiency. It has put more than $11 billion into seven vaccine candidates, and the FDA has said it will approve any one that is at least 50 percent effective at preventing infection or reducing its severity.”

The report notes that Operation Warp Speed’s chief scientific adviser, Moncef Slaoui, believes that some of the early vaccine candidates will be 75 to 90 percent effective and that at least two will have won approval by sometime in January.

“By then, Dr. Slaoui has estimated, the factories under contract will have produced enough vaccine for 30 to 40 million people, and then another 80 to 90 million people every month after that,” the report added. “Assuming nothing goes wrong, he said, there will be enough doses for all 330 million Americans to be vaccinated by next June.”

The report noted that the military is standing by to assist in the rapid distribution of any vaccines that become available and that skepticism and hesitation to taking a vaccine may quickly fade as people begin to weigh the relatively minuscule risks of a vaccine against the potential effects of contracting the virus, including “the prospect of being unable to return to work, having to home-school one’s children for years and not eating in a restaurant, flying on an airplane or watching a movie in a theater without the specter of anxiety.”

Published at dailywire .com. Reprinted here for educational purposes only. May not be reproduced on other websites without permission from The Daily Wire. 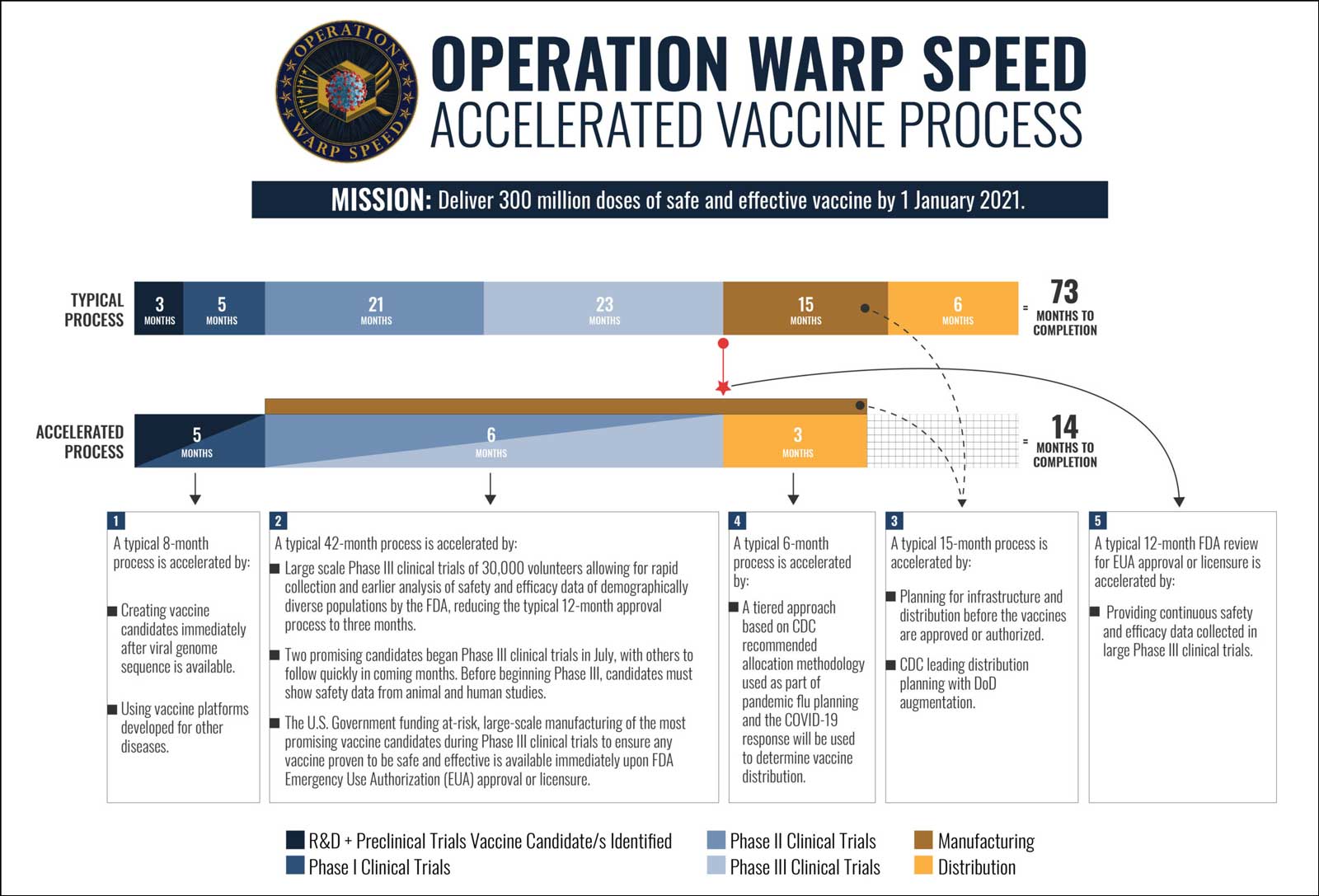 3. Define vaccines, therapeutics, diagnostics and clinical trials as used in the article.

4. When do experts believe the pandemic will end, according to Mr. McNeil?

5. What does Mr. McNeil’s report note about health experts’ view of Operation Warp Speed’s effectiveness in speeding up a Covid-19 vaccine? (List several pieces of good news about vaccines.)

6. Take an informal poll with friends and family. Ask: would you take a vaccine when it becomes available? Please explain your answer. (And if not, what would need to happen before you would do so?)

Operation Warp Speed’s goal is to produce and deliver 300 million doses of safe and effective vaccines with the initial doses available by January 2021, as part of a broader strategy to accelerate the development, manufacturing, and distribution of COVID-19 vaccines, therapeutics, and diagnostics (collectively known as countermeasures).  — Read more (video included) at hhs.gov.