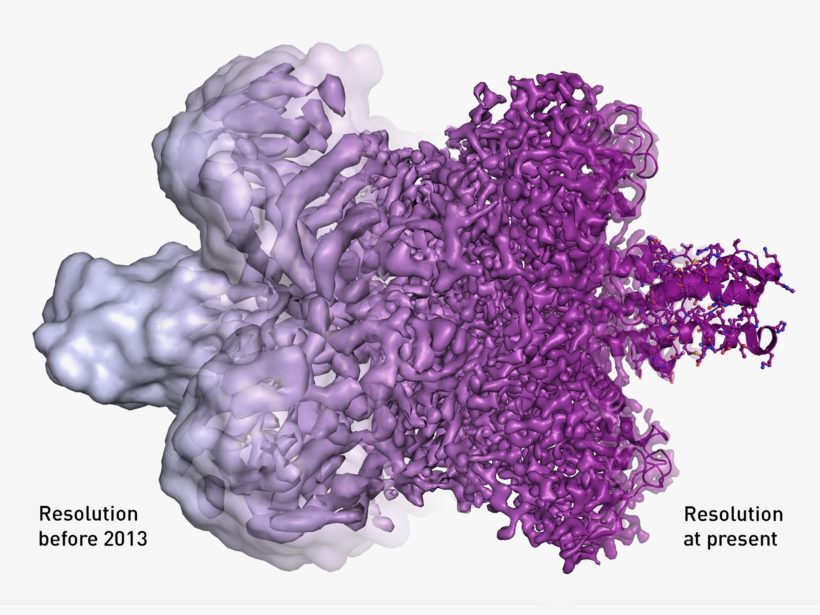 In only the last four years, the resolution of cryo-electron microscopy has improved dramatically. (Image: Martin Hogbom/The Royal Swedish Academy of Sciences)

Microscopy is the technical field of using microscopes to view objects and areas of objects that cannot be seen with the naked eye. There are three well-known branches of microscopy: optical, electron, and scanning probe microscopy. (wikipedia)

Transmission electron microscopy is a microscopy technique in which a beam of electrons is transmitted through a specimen to form an image. The specimen is most often an ultrathin section less than 100 nm thick..An image is formed from the interaction of the electrons with the sample as the beam is transmitted through the specimen. The image is then magnified and focused onto an imaging device…Transmission electron microscopes are capable of imaging at a significantly higher resolution than light microscopes (from wikipedia)

The work by Jacques Dubochet, Joachim Frank and Richard Henderson makes it possible to image proteins and other molecules after freezing them rapidly to preserve their shape, providing a powerful new tool for medical research.

“It’s like frames in a movie. Each of these pictures represents a frame and they can be put together into a movie and we can see what the molecules do,” said Peter Brzezinski, a member of the Nobel committee for chemistry.

The new approach fills a previously blank space by generating images [making pictures] of everything from the surface of the Zika virus to proteins that cause antibiotic resistance or are involved in Alzheimer‘s.

The Royal Swedish Academy of Sciences, which awarded the 9 million Swedish crown ($1.1 million) prize, said the technology had moved biochemistry into a new era.

By freezing biomolecules mid-movement, scientists can unravel previously unseen processes – a major advance both for basic understanding and the potential development of new drugs.

Scottish-born scientist Henderson used an electron microscope to generate a three-dimensional image of a protein at an atomic resolution [very clear picture with a lot of detail], showing the potential of the technology.

Until then, electron microscopes were only seen as suitable for imaging dead matter, because the powerful electron beam destroyed the biological material.

His breakthrough was further developed by German-born scientist Frank, a U.S. citizen, while Dubochet of Switzerland used rapidly frozen water to preserve the natural shape of the biomolecules.

Frank said cryo-electron microscopy had “immense” potential for medical research, which is increasingly focused on processes inside cells, but it would take time for this to play out – and he was taken aback by news of the award.

“I was overwhelmed. I thought the chances of winning a Nobel prize were miniscule,” he told a news briefing by telephone.

Henderson was equally taken aback and said he had rejected the first phone call from the Swedish academy on Wednesday before picking up second time.

“The three of us who have been awarded the prize are sort of acting on behalf of the whole field,” he told a news conference in Cambridge, England.

Understanding the structure of proteins and working out how they interact in the body should spark fresh approaches to drug development, just as earlier advances had produced today’s multibillion-dollar biotech* drugs, he added. (*Biotech is short for biotechnology: the use of living cells, bacteria, etc., to make useful products – such as crops that insects are less likely to destroy or new kinds of medicine.)

“In a few years, maybe five years, we might know most of the structures … it’s quite an exciting time,” Henderson said.

Indeed, cryo-electron microscopy is already delivering results, such as the recent discovery of the structure of tau protein filaments in Alzheimer’s disease.

It was also put to work last year in the fight against Zika, when the mosquito-borne virus was linked to an epidemic of brain-damaged babies in Brazil.

As alarm about the outbreak spread, scientists were able to generate three-dimensional images of Zika at the atomic level, jump-starting the search for potential drugs and vaccines.

“The use of these methods has completely revolutionized structural biology so everyone now wants to buy this type of equipment and start this type of research, all over the world,” Johan Aqvist, another Nobel committee member, told Reuters.

Chemistry is the third of this year’s Nobel Prizes after the winners of the medicine and physics prizes were announced earlier [last] week. …

From Reuters .com, October 4, 2017. Reprinted here for educational purposes only. May not be reproduced on other websites without permission from Thomson Reuters.

2. Define the following words used in the article:

3. What does cryo-electron microscopy allow scientists to do? Be specific.

4. What possibilities/potential will there be as the use of cryo-electron microscopy advances? (see para. 10, 14-15)

5. Many news stories are negative or critical. Consider the scientists honored last week with Nobel prizes in medicine, physics and now chemistry. What has been the overall reaction of each of the scientists to being told of their awards?

6. List 2-3 qualities that all of these scientists possess (in addition to intelligence/knowledge in their field of study).

7. How does this news report inspire you?

Why this research is so transformative (businessinsider.com)

In order to understand something — even if it’s microscopic and invisible, like a protein or a virus — you need to know what it looks like.

A recently developed technique called cryo-electron microscopy creates 3D visualizations of biological molecules like proteins, DNA, and RNA, making them visible in ways previously thought impossible. Three scientists — Jacques Dubochet, Joachim Frank, and Richard Henderson — were awarded the 2017 Nobel prize in chemistry Wednesday for their work developing the method, which has given scientists an unprecedented look at what the Nobel prize committee described as “life’s molecular machinery.”

Being able to see the twists, turns, and shapes of molecules can reveal what types of drugs could help treat a virus or which medical molecule might fight a certain type of cancer. Just looking at these structures has filled in scientific knowledge gaps that existed for years.

Electron microscopy refers to the act of sending a beam of electrons at a small sample of a material. Unlike normal microscopes, which use light, beams of electrons can illuminate the tiniest of details in a structure, down the location of individual atoms.

The technique has existed since the 1930s, but many scientists didn’t think it could be used to look at biomolecules for two main reasons.

In 1975, Richard Henderson, a molecular biologist who heads up a lab at Cambridge in the UK, used a weakened electron beam to capture a poor-contrast image of a protein. The protein was protected by a membrane, so didn’t need to be kept in water.

He and colleagues gathered images from a number of angles, then used a mathematical model to create the best picture yet of a protein generated with an electron microscope. But the image didn’t yet have the resolution Henderson wanted.

Meanwhile, Joachim Frank, a Columbia University professor originally from Germany, was working on ways to process the flat 2D images taken by electron microscopes. In the years between 1975 and 1986, he came up with a way to process a number of those fuzzy, flat images and turn them into sharper 3D models. The 3D versions could reveal the structure of a protein, advancing the technique Henderson had previously used.

In the 1980s, Swiss biophysicist Jacques Dubochet set to work solving another problem that was keeping scientists from creating images and models of biomolecules. He developed a way to “vitrify” water by cooling it so rapidly that it became a solid in its liquid form (without forming ice crystals). Essentially, he turned it into glass.

Put together, these developments set the stage for what would become known as cryo-electron microscopy, with “cryo” being the prefix for “cold.”