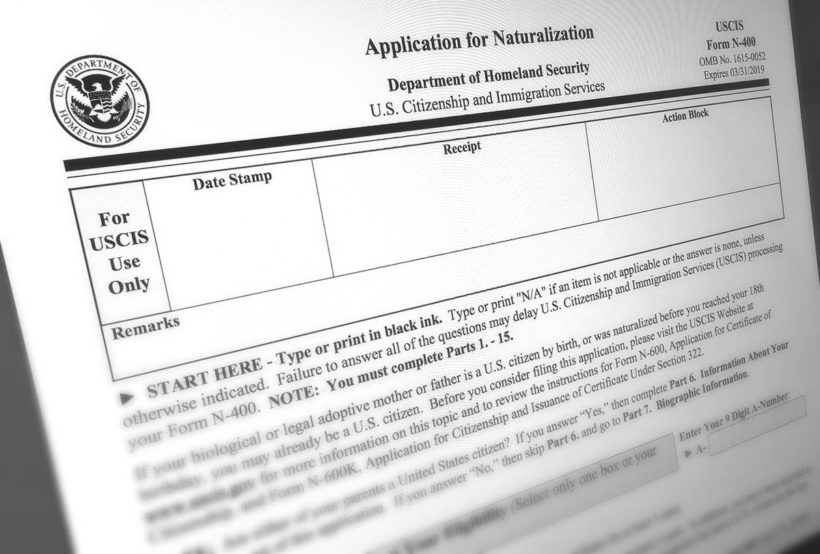 (by Adam Shaw, Fox News) — The Trump administration is establishing a new section within the Justice Department to deal with the process of removing citizenship from foreign-born individuals who fraudulently obtained citizenship by failing to disclose past convictions for serious crimes — including terrorism and war crimes.

The section, which will be within the DOJ’s Office of Immigration Litigation, will be dedicated to denaturalizing those who had failed to disclose they had been involved in criminal activity on their N-400 form for naturalization.

That form includes questions asking whether an applicant has been involved in genocide and torture among other serious crimes, if they have ever been part of a terrorist or totalitarian organization, if they had been associated with the Nazi government in Germany, and if they have been charged or convicted with a crime or served prison time. Targets for denaturalization are those who have made material breaches of those questions.

“When a terrorist or sex offender becomes a U.S. citizen under false pretenses, it is an affront to our system — and it is especially offensive to those who fall victim to these criminals,” Assistant Attorney General Jody Hunt said.

“The new Denaturalization Section will further the Department’s efforts to pursue those who unlawfully obtained citizenship status and ensure that they are held accountable for their fraudulent conduct.”

The department has seen an increase in such cases both because of an increased effort by U.S. Citizenship and Immigration Services (USCIS) to root out fraud, as well as Operation Janus — an operation which began during the Obama administration and that identified hundreds of thousands of cases where paper fingerprint data [for naturalization applicants] was not entered into the centralized fingerprint database.

Officials have pointed to recent cases whereby the DOJ has secured the denaturalization of terrorists, war criminals and sex offenders. They include:

Such denaturalization proceedings are not targeted at people who commit crimes after they become citizens, only those who have made fraudulent citizenship applications and left out crimes they committed on that form.

Citizens cannot be deported, but those who have been stripped of citizenship revert back to permanent residency status, which allows deportation or barring of entry in the case of serious criminal offenses.

Published at foxnews .com on Feb. 19, 2020. Reprinted here for educational purposes only. May not be reproduced on other websites without permission from Fox.

1. What will the DOJ’s newly established Denaturalization Section do? Be specific.

2. Define the following as used in the article:
naturalize, denaturalize, fraudulent

3. What questions does the N-400 naturalization form ask an applicant regarding criminal activity?

4. How did Assistant AG Jody Hunt explain the need for and purpose of the Denaturalization Section?

5. To which naturalized citizens who commit a crime will the denaturalization proceedings not apply?

6. What happens to those citizens who have been stripped of their naturalization?

7. Consider the following:
Citizens cannot lie on an application. For example: a job application, drivers license, tax forms, voter registration, scholarship applications, college financial aid, etc. …
(Did you know? – Intentionally providing false and misleading information on the FAFSA is fraud. The penalties for lying on the FAFSA include, but are not limited to, fines of up to $20,000 and up to five years of jail time, in addition to repaying the financial aid received by the student.)

The rule of law is the legal principle that law should govern a nation, as opposed to arbitrary decisions by individual government officials. All government officers of the United States, including the President, the Justices of the Supreme Court, state judges and legislators, and all members of Congress, pledge first and foremost to uphold the Constitution. These oaths affirm that the rule of law is superior to the rule of any human leader.

David Papke writes at the American Bar Association website (Aug. 22, 2019):
Even before the United States was a nation, there was talk among colonists that laws should govern a new nation, not individuals, including kings or queens, as they’d seen in Britain and other countries. One colonist, Thomas Paine, produced a booklet in 1776 called Common Sense, and it became a bestseller by today’s standards. In it, he detailed how, “in America, law is king.”
No country can maintain a rule of law society if its people do not respect the laws. Everyone must make a commitment to respect laws, legal authorities, legal signage and signals, and courts.

The U.S. is governed by the rule of law. What obligation do you think the President and/or Congress has to address the issue of people lying about criminal activity on their citizenship applications?

View Form N-400 as a PDF in Adobe Reader  — this link added 3:21 pm EST
From the US Citizenship and Immigration Services uscis .gov/n-400 website.

Operation Janus, was created during the Obama administration:

In a September, 2016 report of the DHS Office of Inspector General, the government revealed that it had failed to review the fingerprint cards in almost 150,000 naturalization cases.

In 2009 the agency started to go back to review those unreviewed fingerprint cards in a program it called “Operation Targeting Groups of Inadmissible Subjects,” the program it now calls “Operation Janus.” When it reviewed them (which involves scanning them into the electronic fingerprint database and then comparing them to other prints in the database) it found 858 cases where people had old deportation orders, allegedly adopted a new identity, and then eventually became citizens under the new identity without informing the government of the old orders.

The leads generated by Operation Janus are then passed to Homeland Security Investigations (HSI), which says it is currently following up on these leads. It calls this second-level program “Operation Second Look.” (from an article at hoppocklawfirm .com)