(by Eli Lake, WashingtonTimes.com) – Palestinian and Israeli leaders agreed Thursday to pursue an interim understanding, or framework agreement, before ironing out a peace treaty during the first direct talks between the two sides since 2008. 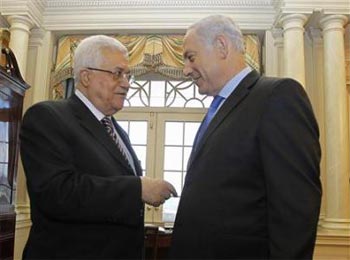 Israeli Prime Minister Benjamin Netanyahu [on the right in the photo] met for 1 1/2 hours behind closed doors with Palestinian Authority President Mahmoud Abbas [on left in the photo] at the State Department, along with Secretary of State Hillary Rodham Clinton and Mideast envoy George Mitchell, who described the talks as cordial.

Mr. Mitchell, President Obama’s special envoy for Middle East Peace, told reporters at the department that the framework agreement would be aimed at identifying the areas where compromise is needed.

“The purpose of a framework agreement will be to establish the fundamental compromises necessary to enable them to flesh out and complete a comprehensive treaty that will end the conflict and establish a lasting peace between Israel and the Palestinians,” said Mr. Mitchell, a former Democratic Senate majority leader.

For now, the most tangible [definite; solid] result of the meeting is the agreement for the two leaders to meet again on Sept. 13 and 14 in the Egyptian resort of Sharm el Sheikh. Both leaders also agreed to meet every two weeks or so and to try to finish the negotiations within a year.

The thorniest [difficult; problematic] issues between the Israeli government and the Palestinian Authority include the status of East Jerusalem, a city both sides consider their capital, and the ground of holy sites for all three major Abrahamic faiths.

Also on the list will be a compromise on Palestinian refugees. Palestinians have long asserted a “right to return” for the people and relatives who fled Israeli territory in the 1948 war that established the Jewish state. In 2000, Israel’s then-Prime Minister Ehud Barak offered to compensate financially the families of Palestinians who fled in exchange for ending their claims to territory inside pre-1967 Israel.

“The parties agreed that in their actions and statements they will work to create an atmosphere of trust that will be conducive [helpful; useful] to reaching a final agreement,” Mr. Mitchell said.

This new approach was evident Wednesday evening, when Mr. Abbas referred to the Hamas gunmen who killed four Israelis in the West Bank earlier this week as “murderers.”

Mr. Netanyahu said in remarks at the White House on Wednesday night that Mr. Abbas was his “peace partner.”

Nonetheless, the two sides have yet to agree on a moratorium [a hold on something; a freeze] on Israeli settlement construction in the West Bank. A current freeze on building there will expire on Sept. 26, and Mr. Netanyahu has said he will not extend the freeze. Mr. Abbas has said he will leave the talks if the freeze is not renewed.

The framework agreement approach was tried at the very end of the Clinton administration in 2000 after the breakdown of the Camp David peace talks. The result was a guideline for the conflict that came to be known as the “Clinton parameters,” which allowed for swaps of land between the Palestinians and Israelis for the major settlement blocs in and around Jerusalem to remain part of Israel’s final borders.

The Camp David talks ended in failure, and soon thereafter, a new war, or intifadah, broke out between the Palestinian Authority and the Israeli government. Many of the preventive security services established during the peace process were military targets for Israel. Meanwhile, documents seized by Israeli forces in 2002 found that those same security services were aiding terrorists attacking Israeli civilians.

When asked about how this process was different from others in the past, Mr. Mitchell said: “Our view is this is an effort that will try to learn from the lessons of the past, take the best and bring them forward, but not be bound by any label or category or previous process.” …

1. Identify the following people from the article:

3. What did the two leaders agree to do over the next year?

4. Describe the biggest challenges the two sides face in working out a peace agreement. (What issues will be the most difficult to work out?) [See para. 7, 9, 11]

5. How did Mr. Netanyahu refer to Mr. Abbas?

6. For what reason might the peace talks end after the first meeting set for Sept. 13-14?

7. Under “Background” below, read about the opposing Palestinian ruling parties: Fatah and Hamas. How successful do you think peace talks will be while Hamas rejects negotiations with Israel? Explain your answer.

Part of the problem with peace talks between Israeli Prime Minister Benjamin Netanyahu and Palestinian Authority President Mahmoud Abbas is that Abbas shares power with Hamas, who has said they do not want peace with Israel.  The top Hamas leader in the Gaza Strip rejected compromise with Israel in a speech Wednesday, a day after Hamas gunmen killed four Israelis. In an address to Hamas members, Gaza leader Mahmoud Zahar said the movement would resist peace efforts and criticized Mahmoud Abbas for joining the negotiations.  Read about the two ruling parties of the Palestinians below:

Hamas is a Palestinian Sunni Islamist terrorist organization that currently (since January 2006) forms the majority party of the Palestinian Authority.… Hamas is known outside the Palestinian territories for its suicide bombings and other attacks directed against Israeli civilians, as well as military and security forces targets. Hamas’ charter…calls for the destruction of the State of Israel and its replacement with a Palestinian Islamic state in the area that is now Israel, the West Bank, and the Gaza Strip. …………..In January 2006, Hamas won a surprise victory in the Palestinian parliamentary elections….  Many [Palestinians] perceived the preceding Fatah government as corrupt and ineffective…  Since Hamas has taken control, the Palestinian territories have experienced a period of sharp internal conflicts, known as Fauda (anarchy), in which many Palestinians have been killed in internecine fighting. (from Wikipedia.org)

NOTE: Wikipedia is an online encyclopedia.  Anyone can submit information on any topic.  Some of the material on Wikipedia has been known to be inaccurate or biased.  It is our judgement that the excerpts from wikipedia.org posted above on Fatah and Hamas are accurate.

View a timeline of peace efforts at wsj.com.

Click here for a map of Israel (including the Gaza Strip and the West Bank.)

For information on Hamas, visit the Council on Foreign Relations website at cfr.org/publication/8968/hamas.html