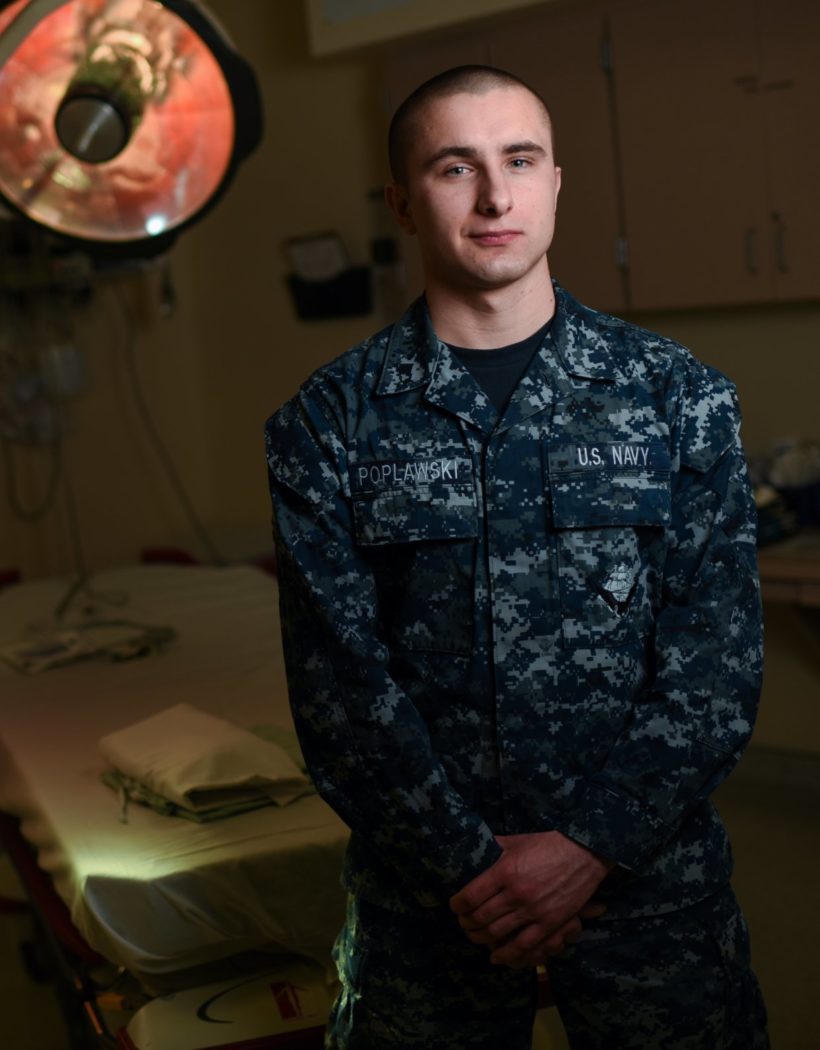 (by Shibani Mahtani, The Wall Street Journal) – CHICAGO— Konrad Poplawski, a 22-year old Navy hospital corpsman, is about to be deployed as a battlefield medic with the 2nd Marine Division, which has served in deadly battlegrounds in Iraq and Afghanistan.

But first, he is making a pit stop at Cook County’s Stroger Hospital, which the Navy says is among few places here in the U.S. that provide experience treating the types of wounds he will inevitably see on the battlefield.

For so long “the first time a corpsman got any trauma experience was when they were deployed, and some would just freeze up,” said Captain Paul Roach, a U.S. Navy surgeon at the Lovell Federal Health Care Center north of Chicago. “We don’t want that to happen anymore,” said Capt. Roach, who heads the program in the Great Lakes region.

The Navy is working to formalize a pilot program that has been tested here for three years, rotating newly enlisted hospital corpsmen—the combat medics for the Navy and Marines—and those needing a refresher while they are back home, for six to eight weeks through Stroger Hospital’s trauma center. The 14-bed unit treats over 6,000 trauma patients yearly, many of them with penetrating, life-threatening wounds akin to those on the battlefield.

Though Chicago is experiencing a sustained drop in murders since a dramatic spike in 2016, it remains a city where a high number of gunshot victims cycle through the trauma center night after night.

About 30% of patients at Stroger Hospital, on Chicago’s near West Side, are admitted to the trauma ward with wounds from firearms, compared with a national average of 4.2% for level 1 trauma centers—hospitals certified to have the resources to handle multiple victims with penetrating and other serious wounds—according to the National Trauma Data Bank.

“The experience here can’t be replicated elsewhere, unless you have a major land invasion,” said Dr. Faran Bokhari, who chairs the trauma & burn surgery unit at the hospital.

In many front-line Marine units, immediate medical care for gunshots, explosions or shrapnel comes from these corpsmen who mostly are young, new to the service and new to seeing up close the wounds they train to treat. The Navy medics, known as hospital corpsmen, typically receive 14 weeks of training in first aid and patient care in Fort Sam Houston in Texas after initial boot camp, and then have the option for additional training.

The program at Stroger Hospital is part of a new push from the Department of Defense to prioritize civilian and military partnerships, specifically budgeted for in last year’s National Defense Authorization Act. Navy corpsmen started embedding at Stroger Hospital as part of a pilot program in 2014, but the program will be expanded and designated an official training rotation this spring.

“Corpsmen are not routinely exposed to trauma or critically injured patients during their first assignments,” said Defense Department spokeswoman Maj. Carla Gleason. This “realistic, hands-on trauma training will allow them to hone their skills and increase their readiness.”

In recent days, the group of corpsmen have learned skills including how to scrub in before entering an operating theater and how to operate a range of machinery, including suction machines for patients who are losing blood. After just two days of training, they are fully immersed in the trauma unit’s team of doctors and surgeons, expected to help with procedures during the trauma unit’s busiest shift from 3 p.m. to 3 a.m.

Navy corpsmen often operate independently in combat zones, and the immersion helps them learn protocol and procedures in a large hospital so they can later replicate that.

“A lot of it is here’s your training, you learn, it gets drilled in into your head—then it’s just go,” said Andrew Swain, a 26-year old corpsman who has served as a medic in Iraq. During that deployment, in his first “mass-casualty incident,” he and just a handful of other medics had to treat about eight injured at the same time, all with traumatic injuries.

A week into their training, the corpsmen have seen multiple patients come in with gaping bullet hole wounds, and one with a traumatic injury to the eye after a motorcycle he was working on blew up in his face.

For Corpsman Poplawski, who grew up in suburban Michigan, it was his first time seeing anyone with a gunshot wound.

The experience “has prepared me to deal with worse things out in the field,” he said. “I’ll be the only one out there, so I’ll have to learn from this.”

—Ben Kesling contributed to this article.

1. a) For what reason is the U.S. Navy sending hospital corpsman Konrad Poplawski and others to Chicago’s Cook County Stroger Hospital before being deployed overseas?
b) How did Captain Paul Roche explain the purpose of the program?

2. Why is Stroger the best hospital for the program? Be specific.

3. Why is it so important for frontline medics to have this additional training experience in Chicago?

4. For what reasons did the Navy develop this program? Be specific.

5. What specifically will the corpsmen do during their training program at Stroger?