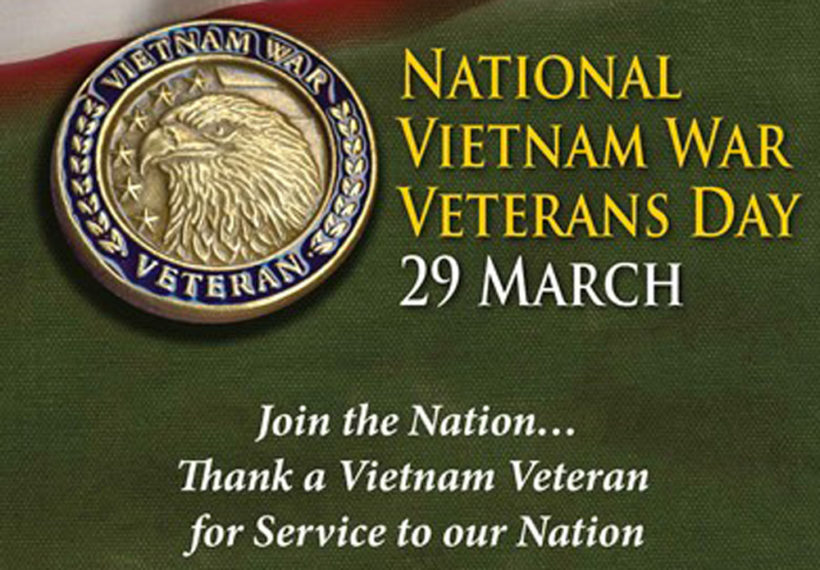 (by Brian Albrecht, The Cleveland Plain Dealer) CLEVELAND, Ohio – [When our vets returned home from Vietnam,] there were no parades, no civic salutes. In fact, the vehemence of anti-war sentiment at one time forced many veterans to swap their uniforms for civilian clothes as soon as they set foot in the U.S. to avoid being the target of scorn.

The March 29 National Vietnam War Veterans Day is partly intended as a way to make up for that slight. It’s stated primary objective is to “thank and honor Vietnam veterans and their families for their service and sacrifice on behalf of the Nation, with distinct recognition of former prisoners of war (POWs) and families of those still listed as missing in action (MIA).”

The commemoration honors all U.S. veterans who served on active duty from November 1, 1955 to May 15, 1975, regardless of location.

The day was signed into law as an annual event by President Donald Trump in 2017. At that time the Department of Veterans Affairs estimated there were 6.4 million living Vietnam veterans and 9 million family members of those who served.

March 29 was chosen because that was the day in 1973 when the last 2,500 U.S. troops were withdrawn from South Vietnam, and the last of American POWs held in North Vietnam arrived back home.

[One of the events taking place across the country] this year is a special Vietnam War Veterans Day program that will be held March 29 at the Garfield Heights Civic Center,  sponsored by Greater Cleveland Chapter No. 15 of Vietnam Veterans of America.

The free event, starting at 6 p.m., will feature an evening of honors and recognition of Vietnam veterans.

VVA Chapter 15 member David Kovach said the commemoration day is a way of overcoming “what these guys went through when they came back. It was just a bad time. So anything you can do to get these guys to smile, it’s worth it. “

Ron Schwachenwald, who served two years in Vietnam, …said, “The guys you see most encouraged by that date, and wanted it to happen, are those who lived through an experience that affected them for the rest of their lives.”

…The program in Garfield Heights could also benefit members of the general public who attend, according to John Tidyman, editor and publisher of the local DD214 Chronicle publication for veterans.

“I think it’ll be a history lesson for those who want to learn,” said Tidyman, a Vietnam vet.

Those who don’t know much about the war or the folks who fought it “will leave, knowing a great deal more in a brief period of time,” he added.

Michael Jackson, Vietnam veteran and former [Ohio] judge, will be the keynote speaker at the National Vietnam War Veterans Day program. …[He said] this day of commemoration provides an opportunity for Vietnam veterans to gather, and renew their commitment to welcoming current combatants home. Because when it comes to the reception that Vietnam service members received, “we do not want that to happen ever again to any other veteran,” he said.

He, too, cited the possible educational value of the program for non-veterans, and noted that “family members [of veterans] also may hear things they’re not aware of.”

Vietnam veteran Ray Saikus will be honored during the program for his efforts to get this day of commemoration established.

For years Saikus had lobbied Congress and state officials to have March 29 designated as a day to salute Vietnam vets.

“It was a battle,” Saikus said, and credited his commitment to lessons he learned in the military with its “fine-tuned discipline for staying on the mission, no matter what.”

He also noted that he was influenced by the death of his best friend in high school, a Marine who was killed in Vietnam.

His March 29 campaign was dedicated “in memory of him and his family, and all the ones who died since and their families,” Saikus said. “There was a void, of not being appreciated for the sacrifice of both a loved one and their family.”

His campaign material included the request that March 29 serve as a reminder and a promise that, “Never again will a generation of citizens and veterans abandon those who served or are serving their country nor their respective families.”

So there is a sense of satisfaction that “I got to deliver something to them, and future generations, so this will not be forgotten,” he added.

A National Vietnam War Veterans Day is also an occasion when vets can gather in a camaraderie of purpose and resolve, and “shed that sense of abandonment,” Saikus said.

As he noted, “it’s never too late to heal, and this [commemoration] is the perfect opportunity to initiate that healing process.”

Published at cleveland .com. Reprinted here for educational purposes only. May not be reproduced on other websites without permission from The Plain Dealer.

1. How were U.S. veterans treated by many Americans when they returned home from the Vietnam war?

2. a) What is the objective of the National Vietnam War Veterans Day, which was signed into law in 2017 by President Trump?
b) On what date is this commemoration held each year to honor our Vietnam War veterans?
c) Who does this day honor?
d) How many living Vietnam veterans were there in 2017? How many family members?

3. Why was the date March 29 chosen to honor our Vietnam vets each year?

4. a) How many Americans served in the Vietnam War? [between 1955 and 1975 – the Pentagon said it makes no distinction between veterans who served in-county, in-theater or were stationed elsewhere during the 20 years of the conflict].
b) How many of our troops died in Vietnam?

5. a) How did / will your community, county or state commemorate this day? (Do an internet search if you need to.)
b) What could your school do to honor our Vietnam veterans on this day?

CHALLENGE:
a) Do an internet search on POW/MIAs from the Vietnam War. How many men are still missing? What is the U.S. military doing to find them or find out what happened to them?
b) Read an inspiring story: “Vietnam War Hero who blinked ‘torture’ in Morse code” (scroll to bottom of the post for the astonishing video)

Vietnam Veterans Day commemorates the sacrifices of Vietnam veterans and their families and is part of a national effort to recognize the men and women who were denied a proper welcome upon returning home more than 40 years ago.

Most states celebrate “Welcome Home Vietnam Veterans Day” on March 29 or 30 of each year. Though there is some debate, March 29 is generally viewed as a more appropriate date. On that day in 1973, the last combat troops were withdrawn from Vietnam and the last prisoners of war held in North Vietnam arrived on American soil. (from ncsl .org: The National Conference of State Legislatures)

Watch a brief video from Maj. Gen. Jim Jackson, U.S. Army (Ret.), Director of the Vietnam War Commemoration talking about National Vietnam War Veterans Day 2019. List some of the suggestions he makes for how each of us should commemorate and honor our Vietnam vets.