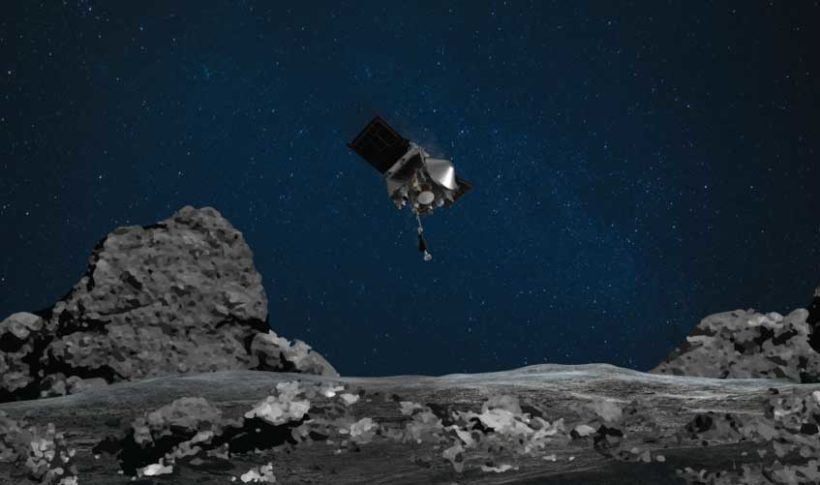 An illustration of NASA's OSIRIS-REx spacecraft, with its sampling arm extended, approaching the surface of the asteroid Bennu. (NASA/GSFC/Univ. of Arizona)

NOTE: OSIRIS-REx  is a probe. A probe is a spacecraft that travels through space to collect science information. Probes do not have astronauts. Probes send data back to Earth for scientists to study. Sputnik 1 was the first probe to go into space.

(by Michael Sheetz, CNBC) — NASA made history Tuesday after a space probe successfully collected samples from the surface of an asteroid during a carefully orchestrated, hours-long maneuver in orbit.

After spending nearly two years circling the near-Earth asteroid Bennu, NASA’s OSIRIS-REx spacecraft used its robotic arm to gather pieces of the space rock that will subsequently be sent to Earth for study. The event marks an important milestone for NASA: It’s the first time the agency has gathered samples from an asteroid in space] – a feat that only Japan has pulled off before but in smaller quantities.

…The OSIRIS-REx – an acronym that stands for Origins, Spectral Interpretation, Resource Identification, Security, Regolith Explorer – is the NASA spacecraft that represents the culmination of years of work. The mission launched in Sept. 2016, with a total cost of $800 million.

“Everything I’ve worked on has been focused on this day, getting the spacecraft down to contact the asteroid and collect the sample,” Dr. Dante Lauretta, a professor of Planetary Science and Cosmochemistry at the University of Arizona and the leader of the mission, told CNBC.

The OSIRIS-REx spacecraft itself is about the size of a large van: 20 feet long, 9 feet wide, 10 feet tall, with an 11 foot arm that will reach down to grab material in a maneuver NASA calls “tagging” the asteroid. The spacecraft was built by Lockheed Martin’s space division.

“What deep space missions are able to discover is directly applicable to [NASA’s other efforts, such as] lunar exploration,” Lockheed Martin director of deep space exploration Ari Vogel told CNBC.

OSIRIS-REx is more than 200 million miles from Earth, having arrived at Bennu in Dec 2018 after two years of travel. NASA spent most of 2019 surveying Bennu with the instruments on board the spacecraft, to further inform its tag attempt. NASA announced in Dec. 2019 that OSIRIS-REx would target a location on Bennu named Nightingale, which is where Tuesday’s material collection occurred. 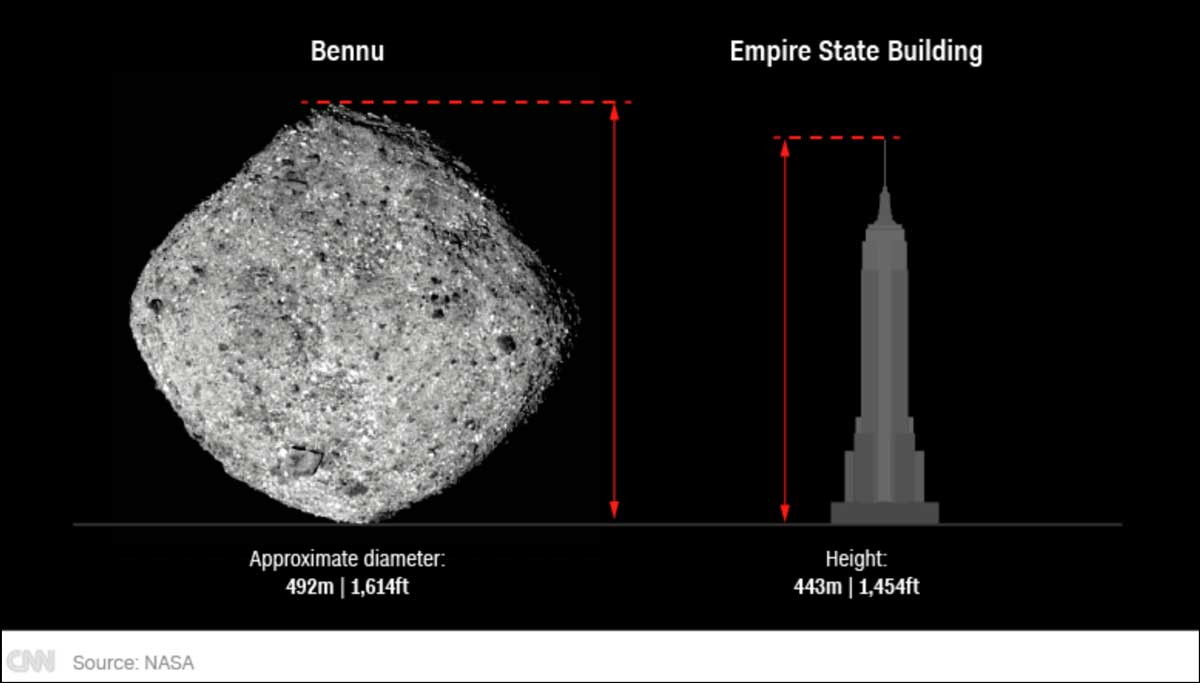 Bennu is “the best characterized asteroid astronomically in history,” Lauretta said. Like the Earth, the asteroid is in orbit around the Sun. At the time of the attempt, Bennu was on the opposite side of the Sun, meaning there is a communications time delay of about 19 minutes between Lockheed Martin’s mission control in Colorado and the spacecraft at the asteroid.

[PBS Nova reports: Just the task of successfully touching down on Bennu was an achievement in accuracy and precision. After traveling some 207 million miles to the asteroid, the spacecraft attempted to descend safely to a spot the size of two parking spaces—and touched down within a meter of its target. And although the descent process took more than four hours, the touchdown itself had to be pre-programmed and carried out autonomously, since it takes almost 19 minutes for a signal to travel from Earth to OSIRIS-REx’s current location. ]

“When we’re talking to the spacecraft, we have these giant antennas that are all over the world that send a signal that goes past the sun, and then another distance across the solar system, and then it reaches the spacecraft,” Lauretta said.

Lauretta is in charge of the scientific goals of the mission, primarily selecting the site to collect the materials.

“Once I made that selection, I handed it over to the engineering team and spacecraft team, which Lockheed Martin is responsible for,” Lauretta said. [Moments after making contact with Bennu, Lauretta said, “I can’t believe we actually pulled this off!]”

…OSIRIS-REx aimed to collect between two ounces and five pounds of Bennu’s material to deliver back to Earth. It’s the largest such sample return from space since the Apollo moon missions.

NASA hopes the samples collected will include new scientific discoveries, in addition to the benefits from new technologies developed by the mission. …

The OSIRIS-REx team also chose Bennu for planetary defense purposes. While it’s just one of more than 500,000 known asteroids in the solar system, Bennu has a “high probability of impacting Earth in the late 22nd century.” That may be more than 150 years away, but NASA wanted to study the asteroid now to discover how the agency might be able to keep it from crashing into the Earth.

[NBC noted: “Bennu is located more than 200 million miles away from Earth but has an orbit that can swing it to within 4.6 million miles of the planet. As such, Bennu and other near-Earth asteroids are classified as potentially hazardous objects. NASA’s Planetary Defense Coordination Office has calculated that there is a 1 in 2,700 chance of Bennu hitting Earth sometime between the years 2175 and 2199”].

“Understanding these rubble piles and how their orbits change is greatly helpful for any potential mitigation missions that we have to do in the future,” Lockheed’s Vogel said. “The Hollywood version of putting a bomb on an asteroid and blowing it up isn’t going to work based on what we’ve discovered with Bennu.”

Lauretta added that, since “it’s mostly American taxpayers who are paying for this mission,” he takes the responsibility of seeking worthwhile new findings “very seriously” – a consideration that he said certainly includes an asteroid intersecting with the Earth.

“It’s a relatively large asteroid, so it would ruin your day,” Lauretta said.

“Asteroids are nature’s way of asking: ‘how’s your space program coming along?’ Because someday in the future humanity may need to mount a mission to deflect this asteroid or another asteroid from hitting us. We have developed an amazing array of technologies for getting out to an asteroid, doing all kinds of precision maneuvering around this asteroid, characterizing it in great detail … all of that will be relevant to any kind of future asteroid impact mitigation mission.”

….. Vogel noted that “the days after tag are going to be almost as exciting,” because it’s when the OSIRIS-REx spacecraft will relay back whether it collected enough material to head back. The spacecraft has fuel for two more capture attempts if not, which would take a few months to coordinate.

The “key decision point” will be on Oct. 30, Lauretta said, as that’s when the team will “make the decision of whether we have enough sample and we succeeded.”

The spacecraft is scheduled to depart Bennu early next year, traveling back to Earth where it is expected to arrive in September 2023.

Published at CNBC .com. Reprinted here for educational purposes only. May not be reproduced on other websites without permission from CNBC.

2. Why was there over an 18 minute delay between what the probe was doing and the control center receiving that information?

3. What makes the actual touch down of the probe on the asteroid such an astounding feat? Be specific.

4. What does NASA say are benefits of the program to reach the asteroid and collect samples? (see para. 14, 20)

5. What 2-3 words would you use to describe the scientists/researchers working on this project?

6. CNBC also noted in the aricle:

Ahead of the touchdown, Lauretta said that the OSIRIS-REx team created “a very detailed map of the asteroid” to find the right target spot. The spacecraft didn’t technically land on the asteroid, Vogel explained, for a number of reasons. Primarily, Vogel said that Bennu has its own micro-gravity environments, so “any sort of force can greatly perturb the asteroid’s orbit” and make it “really tricky” to control the spacecraft. That’s why the teams created the “touch-and-go-maneuver,” so the spacecraft would only gently touch the asteroid before backing away.

To make that possible, Lockheed Martin and NASA developed a technology called natural feature tracking. It’s a precise autonomous guidance system that directs the spacecraft down to a planetary surface.

“We’re the first mission to use this,” Lauretta said.

What is your reaction to this?

Both Lauretta and Vogel spoke about two future applications of the OSIRIS-REx technology:

*In space exploration, in situ resource utilization (ISRU) is the practice of collection, processing, storing and use of materials found or manufactured on other astronomical objects (the Moon, Mars, asteroids, etc.) that replace materials that would otherwise be brought from Earth.

While Vogel thinks “the business case doesn’t quite close on” asteroid mining currently, he noted that there are several aspects of the mission that could be used in the future – a fact Lauretta further emphasized.

“We do look at these near Earth asteroids as economic resources potentially,” Lauretta said. “It’s an expensive operation, but any mining operation is expensive to get up and running. And these do represent natural resources that are accessible in the solar system.

“In some ways we’re the prospector,” Lauretta added. “We’re out there checking the composition of these materials and we’re bringing it back. It’s like the old geologists that was poking around in the mountains, bringing back the spec samples to the lab, see if it’s worth mining or not.” (from the CNBC article above)