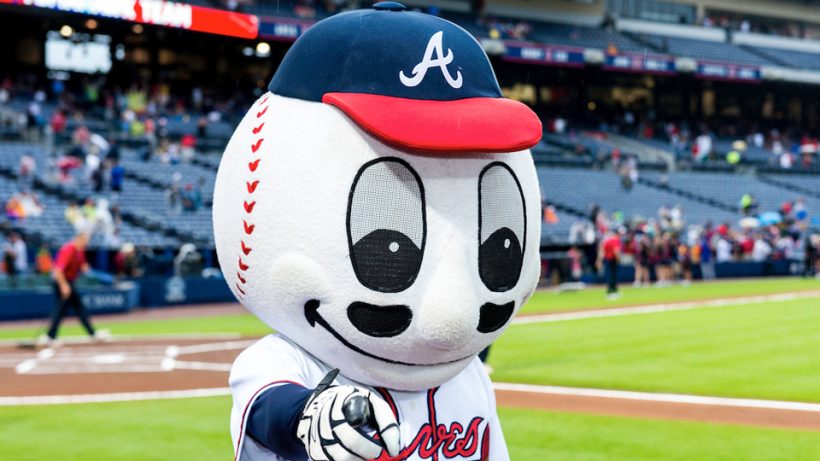 MLB Commissioner Rob Manfred said that the decision to yank the July mid-season classic from Atlanta was made because “MLB fundamentally supports voting rights for all Americans and opposes restrictions at the ballot box.”

President Biden told ESPN last week he would “strongly support” pulling the widely watched game out of Atlanta and claimed the new state law heralded the return of racist Jim Crow policies, which [The Washington Post, refuted in a fact-check, gave Biden “4 Pinocchios” for promoting the lie that the new law reduced voting hours, among other false claims] . …

Republicans … pointed out that Biden has been awarded “Four Pinocchios” by the Washington Post, which endorsed his candidacy, for spreading misinformation about the new state election integrity law.  …..

The Georgia election reforms passed by the Republican-held state legislature [which makes it easier to vote and harder to cheat] and signed last week by Gov. Kemp impose new rules on absentee voting — including requiring a photo ID and shortening the absentee voting window — in addition to other changes that conservatives say will improve election integrity. …

Democrats allege that the bill will constrict voting, particularly among poorer and African-American voters, who helped Biden carry the state in November by fewer than 12,000 votes. Democrats also narrowly won a pair of Senate runoff races in January.

But Biden has run afoul of fact-checkers for repeatedly misdescribing details of the law, including recently saying “it’s sick” that the law will “end voting at 5 o’clock when working people are just getting off work,” [which is a false claim].

In fact, the bill does not shorten voting hours, but allows counties to expand them later than 5 p.m. It also adds a mandatory new early-voting day — a second Saturday before an election — and allows counties the option of opening for voting on the two Sundays preceding an election.  …..

MLB did not announce a new location for the All Star Game, which is scheduled for July 13.

From WSB-TV 2 Atlanta:  The MLB pulled its 2021 All-Star Game from the Atlanta Brave’s stadium, and the 2021 MLB draft, in the wake of the state’s new election integrity law enacted last month.

The league has characterized the law as a “voter suppression” law. Still, according to an analysis by Heritage Action, the left has publicized falsehoods about the law, noting specifically that the law “actually preserves or expands ballot access in several important ways.”

[The Heritage analysis also explains: “The law requires a driver’s license or free state ID number, which 97% of registered voters already have. Anyone without a valid ID can easily obtain one for free. The voter ID requirement replaces the state’s controversial signature match program that led to the disqualification of thousands of votes in 2020.  The law’s voter ID requirement for absentee ballots is overwhelmingly popular in Georgia across the board. According to an AJC poll in January, 74% of Georgia voters support it, including 63% of black voters, and 89% of those making under $25K/year.”].

But the league’s decision to take the game away from Atlanta is costing the city of Atlanta the tens of millions in revenue it would have made if the game was held in the Braves stadium.

The Cobb County Travel and Tourism Bureau estimates that losses from Major League Baseball’s decision to move the All-Star Game out of Atlanta total more than $100 million.

“This event would have directly impacted our county and the state, as visitors spend their dollars on local accommodations, transportation, entertainment and recreation, food and retail throughout the county,” Cobb County Travel and Tourism said. “This would have been a big boost to Cobb businesses and help with recovery after the COVID-19 pandemic.”

The bureau said the 8,000-plus hotel rooms contracted for the game that will now not be needed will have a negative impact on the county’s hospitality industry, further delaying recovery from the pandemic.

No word on why others were not boycotted by the MLB:

NOTE: Before answering the questions, read the “Background” and “Resources” below.

2. For what reason did the MLB pull the baseball All Star Game out of Georgia?

3. What claim did President Biden make about the election integrity law passed in Georgia by the Republican majority legislature and governor?

4. How will the commissioner’s move to cancel Georgia impact businesses in the state?

5. For what reasons is the baseball commissioner’s move seen as hypocritical?

6. What is the truth about the Georgia law?

Sen. Rubio, pointing out that the league still has business relationships with China and Cuba, accuses Mr. Manfred and the MLB of hypocrisy.

“Taking the All-Star game out of Georgia is an easy way to signal virtues without significant financial fallout. But speaking out against the Chinese Communist Party would involve a significant loss of revenue and being closed out of a lucrative market.” Rubio wrote in a letter to the commissioner.

“I am under no illusion that Major League Baseball will sacrifice business revenue on behalf of its alleged corporate values. Similarly, I am under no illusion you intend to resign as a member from [Georgia’s] Augusta National Golf Club. To do so would require a personal sacrifice, as opposed to the woke corporate virtue signaling of moving the All-Star Game from Atlanta.”

What do you think? Should Commissioner Manfred cancel his Augusta Golf Club membership following his decision to deprive Georgia businesses of the millions they would have made from All Star Week – as well as the excitement and enjoyment Georgia baseball fans would have had? Explain your answer.

8. Why do you think Democrats led by President Biden, and the media, are misrepresenting the Georgia law as “voter suppression” – despite the fact that The Washington Post pointed out the inaccuracies in their false accusations?

9. President Biden encouraged a boycott against an American state (Georgia) – but not of the 2022 Olympic Games to be held in Communist China, where ethnic cleansing and genocide are being carried out by the regime. What is your reaction to this?

10. Read all of the “Background” and “Resources” as well as the linked items. What is your view of the Georgia election law: will it lead to election integrity or cause “voter suppression”? Explain your answer.

CHALLENGE: The Georgia election law is 92 pages. Read it for yourself to determine whether it will protect the integrity of the election in that state. (Don’t let members of the media interpret it for you. Know for yourself what it says.)

WSB-TV 2 Atlanta notes: President Biden encouraged a boycott against an American state (Georgia) – but not of the 2022 Olympic Games to be held in Communist China, where ethnic cleansing and genocide are being carried out by the Chinese Communist regime.

South Carolina Republican Rep. Nancy Mace called out the MLB for moving the 2021 All-Star game out of Georgia over its new voter-ID law – because the league still requires fans to show photo identification cards to pick up tickets. 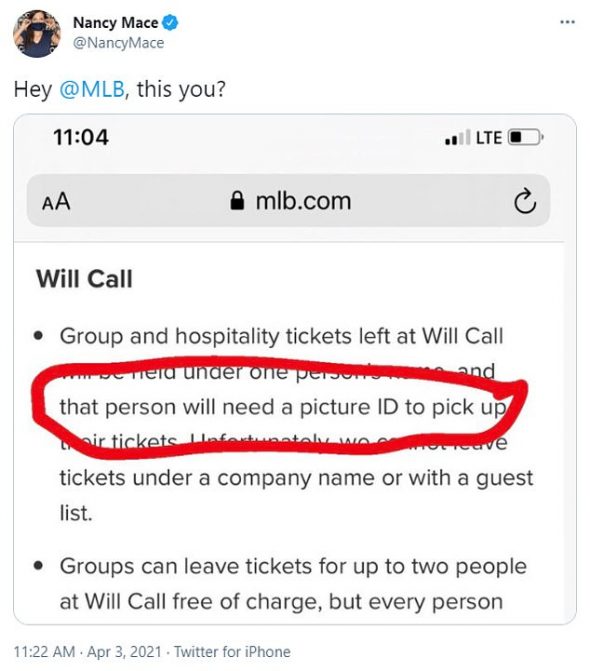 The MLB signed a deal with Tencent Wednesday, one of China’s largest tech companies [a company backed by the Communist Party of China].

The new deal grants Tencent rights to stream MLB games in a number of Asian countries until 2023. Back in 2018, the MLB and Tencent reached another deal that granted the company streaming rights for 125 games within China.

“@MLB caves to pressure & moves draft & #AllStarGame out of Georgia on the same week they announce a deal with a company backed by the genocidal Communist Party of #China,” he tweeted. “Why are we still listening to these woke corporate hypocrites on taxes, regulations & anti-trust?”

Critics have accused the league of caving to corporate sponsors and owners. And although the league said it asked for players’ feedback in its announcement Friday, it’s unclear that officials had warned ballplayers of a final decision before announcing it.

The conflicting deals raise questions about whether the league is making an effort to take a moral stand or to achieve maximum profits.

Atlanta’s home team, the Braves, said in a statement that it is “deeply disappointed” by the choice.

“Unfortunately, businesses, employees and fans in Georgia are the victims of this decision,” the team said. (by Michael Ruiz, April 4, FoxNews)

Did you know? Voter identification laws are not uncommon and at least 35 states require voters to show or present some form of ID when voting, whether it be by mail or in person. Georgia already has voter ID laws in place for in person voting.

From Georgia’s PBS: The law adds an ID requirement for absentee-by-mail ballots, requiring Georgians to use their driver’s license, state ID card or other voter ID to apply. When returning the ballot, voters would be required to use those ID numbers or the last four digits of their Social Security number to verify who they are. This replaces the controversial method that has election workers match signatures on applications and ballot envelopes with those on file.

Coca-Cola has released a statement condemning Georgia’s new voting legislation, but the company requires valid ID to be admitted to its annual meeting of shareholders.

“At the entrance to the meeting, we will verify your registration and request to see your admission ticket and a valid form of photo identification, such as a driver’s license or passport,” the company wrote in reference to its 2020 annual meeting of shareholders, held before the coronavirus pandemic.

Georgia’s new voting law requires a drivers’ license or state ID number be listed to submit an absentee ballot to vote, among other new reforms. The state already required ID to vote in person. It had previously relied on signature matching to verify ballots.

Coca-Cola is based in Atlanta. This week, the beverage company, among other Georgia-based companies, issued statements condemning the new legislation after threats of boycott. (from a FoxBusiness report)

From The Washington Post fact-check of President Biden’s claims about the Georgia election law:

A falsehood about the Georgia election law

Biden keeps making an unfounded Four-Pinocchio attack on an election bill signed into law in Georgia.

In reality, Election Day hours were not changed and the opportunities to cast a ballot in early voting were expanded. The law made a modest change, replacing a vague phrase “normal business hours” — presumed to be 9 a.m. to 5 p.m. — to a more specific 9 a.m. to 5 p.m. time period. (Some rural county election offices worked only part time during the week, not a full eight-hour day, so the shift to more specific times makes it clear they must be open every weekday for at least eight hours.) But that’s the minimum.

Under the new law, counties have the option to extend the voting hours so voters can start casting ballots as early as 7 a.m. and as late as 7 p.m. — the same as Election Day in Georgia. Moreover, an additional mandatory day of early voting on Saturday was added and two days of early voting on Sunday were codified as an option for counties.

The White House did not provide an explanation for Biden’s erroneous statement, which has turned up in a news conference, an official statement and an interview. Astonishingly, at an April 1 news briefing, White House press secretary Jen Psaki defended the president’s comment, incorrectly arguing “it standardizes the ending of voting every day at 5, right?”

Watch an example of one news report on the Georgia law, which is similar to NBC, CBS, CNN, CNBC, NY Times, etc.
In this report, ABC News falsely accuses Georgia’s law as “voting restrictions designed to keep people from voting” and falsely asserts “as 40 other states move to set new limits on voting”: