‘Miracle’ as More Than 100 Trapped Chinese Miners are Rescued 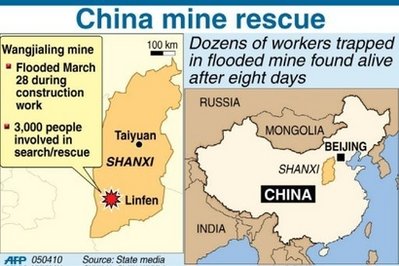 (by Peter Foster, Telegraph.co.uk) BEIJING – Rescue workers have pulled 115 men from the mine in China’s northern Shanxi province, sparking cheers from the 3,000 men who had worked round-the-clock shifts for more than a week to reach their stranded colleagues, according to China’s state news broadcaster.

Relatives and bystanders, many shedding tears of relief, burst into spontaneous applause as the first men were brought up from the flooded shaft where they had survived 820ft below ground by using belts to hold themselves up in the rising waters.

A total of 153 miners were reported to be trapped in the Wangjialing mine, which was still under construction on March 28 when workers breached an adjacent old mine [that had been shut down and filled with water], causing the pit [they were working in] to flood with a torrent of icy black water.

“A miracle has finally happened,” said Liu Dezheng, a spokesman for the rescuers, after the first nine miners were brought to the surface shortly after midnight on Sunday.

“This is probably one of the most amazing rescues in the history of mining anywhere,” said David Feickert, a coal mine safety adviser to the Chinese government.

“The miners in the lowest levels will be in the most extreme danger,” he added, “Just think of a tall building, with people on different floors, if that suddenly filled up with water.” The dramatic scenes were relayed to the public by China’s state-run broadcaster CCTV and continued throughout Monday, which was “tomb-sweeping day”, a national holiday in China to honour the dead.

The rescued men were shown being stretchered from the scene covered in thick green blankets, with towels placed across their blackened faces to shield their eyes from the sunlight after spending so many days in the pitch darkness. One of the workers still was holding his mining lamp.

All were reported to be in a “stable condition”, although weakened by dehydration and hypothermia and suffering from skin ulceration caused by their long immersion in filthy water.

“Their blood pressure and heart rates remained normal after having being trapped in the shaft for one week,” Xinhua reported of the survivors.

A convoy of ambulances snaked backwards from the colliery gates waiting to receive more survivors, with relatives and bystanders lining the road bursting into applause as each ambulance containing a new survivor sped off to waiting hospitals.

Families of the survivors were overjoyed. “He called and managed to say my sister’s nickname, ‘Xiaomi,’ so we know it’s really him and that he’s alive,” said Long Liming, who said he received a call around midday from his rescued brother-in-law Fu Ziyang.

Liu Qiang, chief medical officer at the Linfen hospital in Shanxi province, confirmed the miners were in a stable condition, but added that some were still in shock.

CCTV said that some of the miners had hung from their belts for three days before managing to clamber into a mining cart that had floated by.

Hopes for rescuing the men had all but faded by the end of last week as rescuers battled to pump millions of gallons of water out of the flooded pit.

However they were dramatically revived on Friday after a dredging probe was returned to the surface with a piece of mining equipment attached to it in a way that could have only been done by a human hand.

Within hours rescues banging on a section of pipe had made contact with the trapped men who responded by tapping back, sparking scenes of jubilation from those above ground.

Before Monday’s rescue, the accident at Wangjialing would have been China’s worst since August 2007 when 172 workers died in a mine flood in the eastern province of Shandong.

Despite substantial improvements in mine safety over the last five years, an average of seven miners still die in China every day, most digging coal which satisfies some 70 per cent of the country’s voracious appetite for electricity.

3. How did the miners become trapped?

4. a) What medical problems do the rescued miners suffer from?
b) What report did the chief medical officer of the Linfen hospital give about the miners’ conditions?

5. After five days, rescue workers had almost given up hope that anyone would be rescued. What renewed their belief on Friday that some might still be alive?

6. Why is this story encouraging to you?

Notes on the mining industry in China from the yahoonews story “China Hails ‘Miracle’ as 115 Rescued from Flooded Mine”: