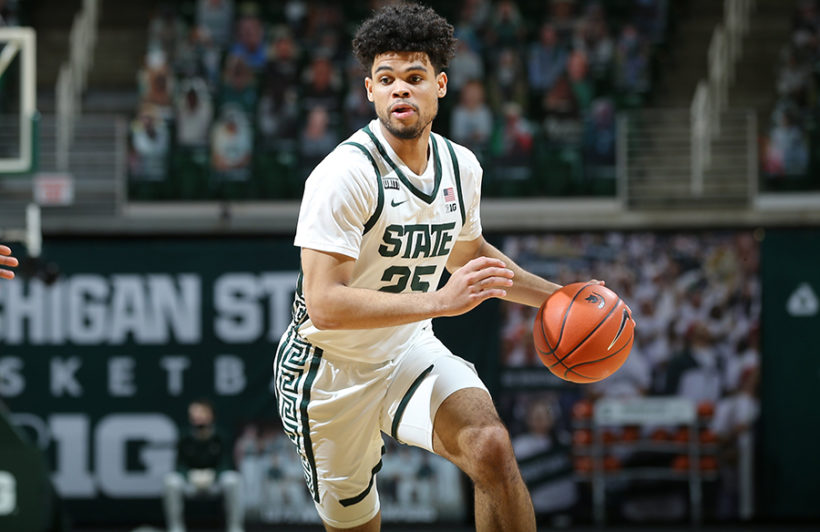 The Michigan State athletic department announced on Thursday an extension of a partnership with Rocket Mortgage that makes the Detroit-based company the presenting sponsor of the Spartans men’s basketball program.

(by Jack Baer, Yahoo Sports) – …Michigan State entered new territory on Thursday by announcing a massive expansion in its endorsement deal with Rocket Mortgage, including a name change for its men’s basketball team on campus.

Under the new five-year deal, Detroit-based Rocket Mortgage will be the presenting sponsor of the famed men’s basketball team the Michigan Spartans, which will now be known throughout the Breslin Center arena as, “MSU Spartans Presented by Rocket Mortgage.”

“Rocket Mortgage has been a valued partner for years with Michigan State and we are excited that they are continuing to support our program into the future. As presenting sponsor of our season, their presence will be an asset as we compete for championships.”

Rocket Mortgage’s relationship with the program comes via the co-founder of its parent company Quicken Loans. Chairman Dan Gilbert, who also owns the Cleveland Cavaliers, is a graduate of Michigan State.

Broadcasters and other outlets will, in all likelihood, continue to call the team the Spartans going forward, though some Big Ten teams may have a little fun with their rivals’ new title. [This] legitimate college basketball team, a power program no less, gave up its very name to the advertising gods. [This is] a team ostensibly composed of amateurs.

…This isn’t the first time private businesses have made their way into the names of sports teams. It’s not too rare a practice in soccer, most notably employed by Red Bull to promote its energy drink through the teams it owns (e.g. New York Red Bulls, FC Red Bull Salzburg). Japanese and Korean baseball teams also often feature business in their names (Rakuten Golden Eagles, Kia Tigers).

In all of those cases, however, the business in question actually owns the team rather than giving them millions of dollars to slap their name onto a scoreboard and promotions. In that respect, the MSU Spartans Presented by Rocket Mortgage are doing something akin to a little league team getting some help from a local business.

Published at YahooSports .com. Reprinted here for educational purposes only. May not be reproduced on other websites without permission.

2. For what reason is the team making the change?

3. a) How did Michigan’s long-time Men’s Basketball coach Tom Izzo react to the name change?
b) Do you think this was an unexpected response? Explain your answer.

4. What importance do you think Rocket Mortgage’s parent company places on the name change?

5. Do you support or oppose public/state universities selling their names to advertisers? Explain your answer.

6. Would you support your favorite professional sports team selling their name to an advertiser if it meant being able to pay for the top players? or reducing ticket prices? etc.? Explain your answer.

OPTIONAL: Read a 2011 article about public schools selling advertising “Cash-Strapped Cities, Schools Say: ‘Your Ad Here’” and answer the questions at the bottom of the article.