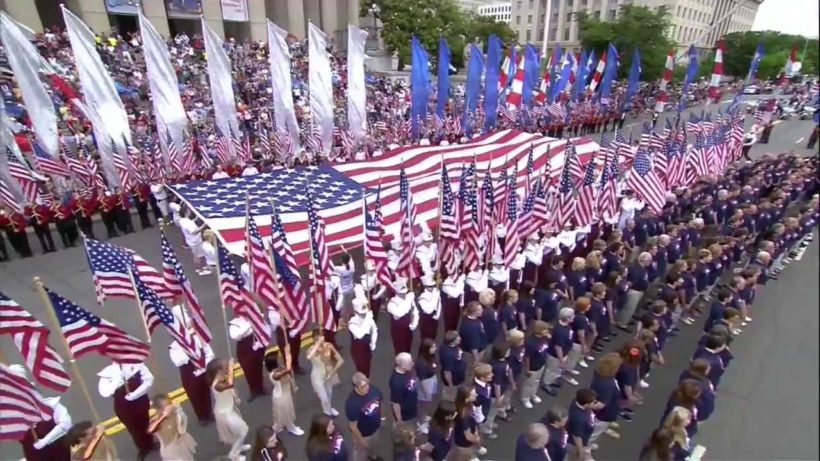 Towns and cities across the country hold Memorial Day parades in honor of those who gave their lives in service to our country. Image from the 2013 National Memorial Day Parade in Washington D.C.

The following is from USMemorialDay.org “Observance” page: Boy scouts participate in placing flags at graves of veterans. PLEASE NOTE: Daily posting and “Answers” emails end for the school year on Tuesday, May 28.  We wish you a wonderful summer!
Check the website during the summer for occasional posts.

1. Why was Memorial Day originally called Decoration Day? When/how did it change?

2. What was the original purpose for Memorial Day?

3. a) List the suggestions provided by USMemorialDay .org for how Americans should observe Memorial Day.
b) What is the National Moment of Remembrance? – What is its purpose?

4. What flower and song are associated with Memorial Day? Explain the significance of each.

5. This year consider how your family can take part in any of the activities from question #3. You can barbecue – but also take some time during the day to honor our fallen soldiers. Do an internet search for “2019 Memorial Day events + the name of your town/city.” Consider attending the event that honors those who have died while in service.

Watch the National Memorial Day Concert on Sunday, May 26th on PBS.

Check out some of the Memorial Day commentaries posted at StudentNewsDaily in previous years:

For a list of U.S. military casualties of war from the Revolutionary War until now, see the wikipedia entry.

THE PLAYING OF TAPS became a standard component to U.S. military funerals in 1891.